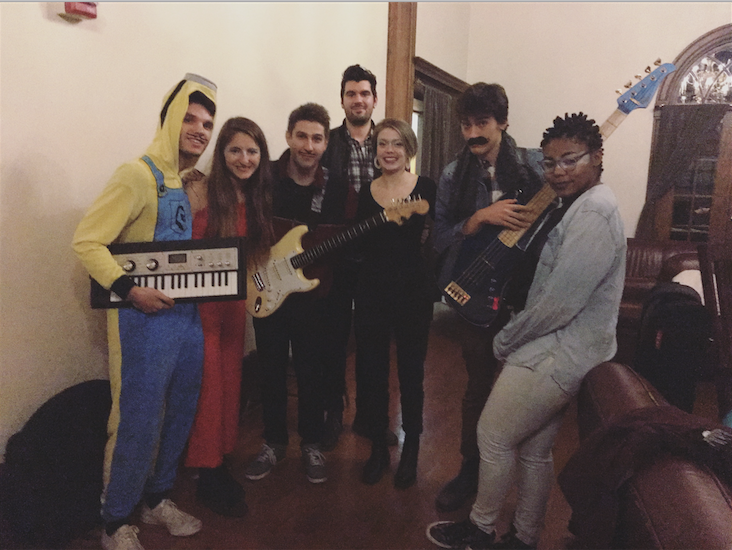 Synthesizing the best of the Wesleyan music scene with some of the top talent from New York’s conservatories and workshops, Jess Best performed an unparalleled show at Alpha Delt on Saturday night. While some students were just there to show off their costumes, others couldn’t help but forget where they were as the band peeled away its sound to its essence, layer by layer.

After releasing Kid Again three months ago, Jess Best hasn’t performed live together much between the EP’s release and Saturday’s show. For those in attendance, however, it was quite hard to believe that a band this in-sync and with such depth to its sound could have been brushing off the cobwebs.

Like a spider’s web, however, the band’s formation stems from the continuous networking that Best began by going to workshops and music venues outside the traditional safe havens for veterans of the Wesleyan music scene. The core of the band formed when Best sang with Randall back at Wesleyan. They were later joined by Taylor Simone of Harlem, who clicked with Best at a jazz festival they attended before college. After Simone graduated from Columbia, she began singing with Best and Randall. The core of the band’s sound then came when Simone recommended bassist and lyricist Connor Schultze to Best. Schultze then recommended versatile keyboardist Paul Bloom, who played with Schultze growing up in Needham, Mass. Schultze also brought on his friend Alex Graff, who is currently a senior at Harvard.

“This is my first show with the band,” Perry said. “I did one rehearsal yesterday, and now I’m playing the show tonight, so I don’t know too much about the foundation of the band.”

Perry assimilated into the band so well that he was almost unnoticeable until he rocked the room with an extensive drum solo on “Fires.”

Chef opened the show, allowing the 10-piece senior band to come full circle after debuting their freshman year as the opener for Best’s band Sky Bars. Jess Best then came on with some members in costume and kicked the show into a higher gear.

The crowd got dancing with “More,” a bubbly track that bounces and bobbles while keeping its balance between Jess Best’s three singers along with Bloom’s synth and Schultze’s bass. Randall and Simone stood out in particular as backup singers, both of whom sing lead vocals for bands Trot Fox and Jazze Belle, respectively. Their complimentary tones to Best’s voice give “More” an angelic tone, and their stage presences brought the crowd to life.

“Soul Flower” features Best alone on vocals, starting with a serene intro accompanied only by Bloom on the keyboard. Using a recurring vocal structure (“There’s a flower in my soul tonight / There’s a mountain up above your eyes,”) the track ebbs and flows into a serene sensory experience, all driven forward by Schultze’s driving bass line.

Best got spunky on “Possessions Pt. III,” channeling a mix of Amy Winehouse and a better version of Lana Del Ray. Though the studio version has more interwoven vocals, the live version allowed Best to let loose and engage the crowd with swinging arm gestures and swinging hips.

The show slowed down to a soulful pace with “The Stranger One,” delivering the combined vocal versatility of Best, Randall, and Simone. On guitar, Graff—who looks like a grown-up version of Antoine Doinel from “The 400 Blows”—let singular notes reverberate through the intimate living room.

“Kid Again” showed off the writing prowess of Best and Schultze, who often go to specific locations to achieve different effects with their writing, such as the Storm King sculpture park in the lower Hudson Valley. Though the song has a nostalgic and sweet feel to it, Best and Schultze manage to sneak in profound and insightful lyrics. “Family ties / and everything we held on tight / they vanish with us underground and in the light / suicide had I never even tried / to be dead or alive in the palms of a butterfly.”

With a rich enough sound, the lyrics in Jess Best’s music can often go unnoticed by a passive listener. Upon closer listening, it becomes abundantly clear that the lyrics on Kid Again are the product of arduous work on the part of Best and Schultze.

“It was a good seven months that we wrote together,” Best said. “We really clicked as a writing team, so we started writing kinda non-stop.”

“We definitely spent a lot of time fleshing out ideas, and then cutting down and all that,” Schultze said.

With perhaps the exception of Graff, who is still studying chemistry in Cambridge, the members of Jess Best are becoming seasoned veterans of the New York music scene despite their age. Investing their creative energy into different venues with a willingness to constantly learn from other talented musicians, the growth of their musical oeuvre is already apparent.

New York City, however, is not just a musical playground. Randall noted that it’s critical to not let oneself become alienated when giving advice to aspiring musicians looking to make the pilgrimage to the Big Apple.

“Realistically, it’s pretty isolating living in New York,” she said. “It’s a sad city. There’s a lot of pain there because there are a lot of people. You ignore people that you see who need help, and you kind of condition a wall when you’re living there. At the same time, being one of the creative meccas of this side of the country, it can be an interesting balance as an artist wanting to experience and wanting to expose yourself to things without feeling protective and closed off. Finding community like we have is really important for a musician who’s trying to get out and make it.”

Still in their mid-20s, the members of Jess Best have a rare opportunity to go far in the music world given where they already are in terms of talent and rigor of work. Only time will tell where they end up, but for now they remain that really good band that you heard about first, a potential point of pride to hold over your friends once they hit it big.