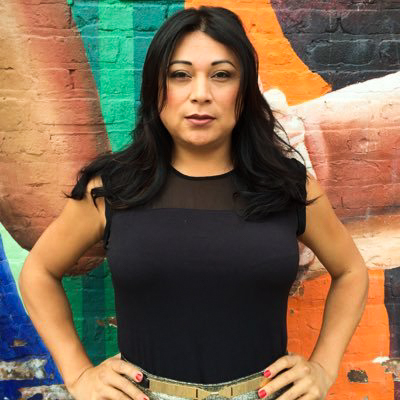 Ajúa Campos began Latinx Affirmation Month with its first event, “Making Latinidad: Affirming Our Intersectionalities,” on Sunday, Oct. 30 in the Daniel Family Commons, featuring a keynote address by trans activist Jennicet Gutiérrez. The speech was preceded by a history of Ajúa Campos, delivered by Kimberly Heras ’17. Kelly Acevedo ’20 and Lauren Salazar ’17 also spoke about being Latinx at the University.

Gutiérrez, an undocumented trans immigrant from Mexico, came to the United States at the age of 15 and began her gender transition four years ago.

“I knew I was attracted to the same sex, but I knew there was more to it,” she said. “Ever since I’ve been conscious of my existence, I strongly identified with the opposite sex.”

Gutiérrez decided to become involved in organizing for advocacy due to the challenges that trans women continue to face. She attracted national attention on June 24, 2015, when she interrupted President Obama during his White House speech in honor of Pride Month to call attention to the struggles of trans immigrants. She called for stopping the abuse of LGBTQ people and removing them from detention centers.

She noted that Latinx people have specific demands.

“When those demands are not met, we have to disrupt,” she said.

While Gutiérrez had planned to fly back to Los Angeles the following day, she extended her stay in Washington, D.C. to reach out to the media in order to get her message through.

“I had to speak from the heart,” she said. “That’s the most powerful thing you can do….I needed to get that message to a broader audience, and hopefully that has been the case.”

Gutiérrez juxtaposed the image of two of the most powerful men in the world, President Obama and Vice President Biden, and herself, an undocumented trans woman. She said that through her actions, she regained the dignity that was taken from her and others.

The activist spoke of her organization, Familia: Trans Queer Liberation Movement, which was founded in the spring of 2014.

“We work at local and national levels to achieve the collective liberation of trans, queer, and gender nonconforming Latinxs through building community, organizing, advocacy, and education,” she said.

She further described Familia’s organizing principles, which include centering the work on the voices of those most impacted, investing resources directly connected to the community’s values, creating and maintaining intergenerational spaces, engaging in coalition work, and refusing to leave members behind.

May 2014 marked the very first initiative that Familia put together with its allies. The initiative denounced the injustices done to undocumented LGBTQ immigrants, especially trans women, bringing attention to their conditions in detention centers, where they were placed while waiting for the judge to make a decision. The immigrants were faced with high costs and a language barrier, which prevented them from acquiring lawyers who could help them.

Gutiérrez spoke of several Familia campaigns, including one to end Immigration and Customs Enforcement (ICE) expansions in Santa Ana, Calif. in early 2016. Familia brought in trans women to give testimony, and the city subsequently voted to end ICE expansions.

“Sometimes the most effective campaign is at the local level,” she said of the efforts.

End Trans Detention is the latest campaign on which the organization is focusing. A National Day of Action was held on Nov. 18, 2015. Die-ins were organized outside detention centers in Chicago, Los Angeles, New York, and Phoenix.

“Sometimes we try to go about it in a diplomatic way, but we continuously hear murders are happening so we have to mobilize,” Gutiérrez said.

Familia is dedicated to addressing various issues women in the trans community face. People often ask for them to advocate for marriage equality, however, Gutiérrez stated that there are many other problems that trans women must confront, such as the fact that many do not have access to employment and consequently turn to sex work.

“For many of us trans women of color, marriage equality is not a priority,” she said.

Gutiérrez touched upon future plans for Familia. She hopes for the organization to start having monthly meetings, saying that there was one in March 2016.

“It’s challenging because LA is all over the place,” she said, citing the difficulties of following up on meetings.

Gutiérrez emphasized the importance of standing with other pro-liberation movements such as Black Lives Matter.

“As we move forward…it is critical, in my opinion, that we need to stand in solidarity,” she said.