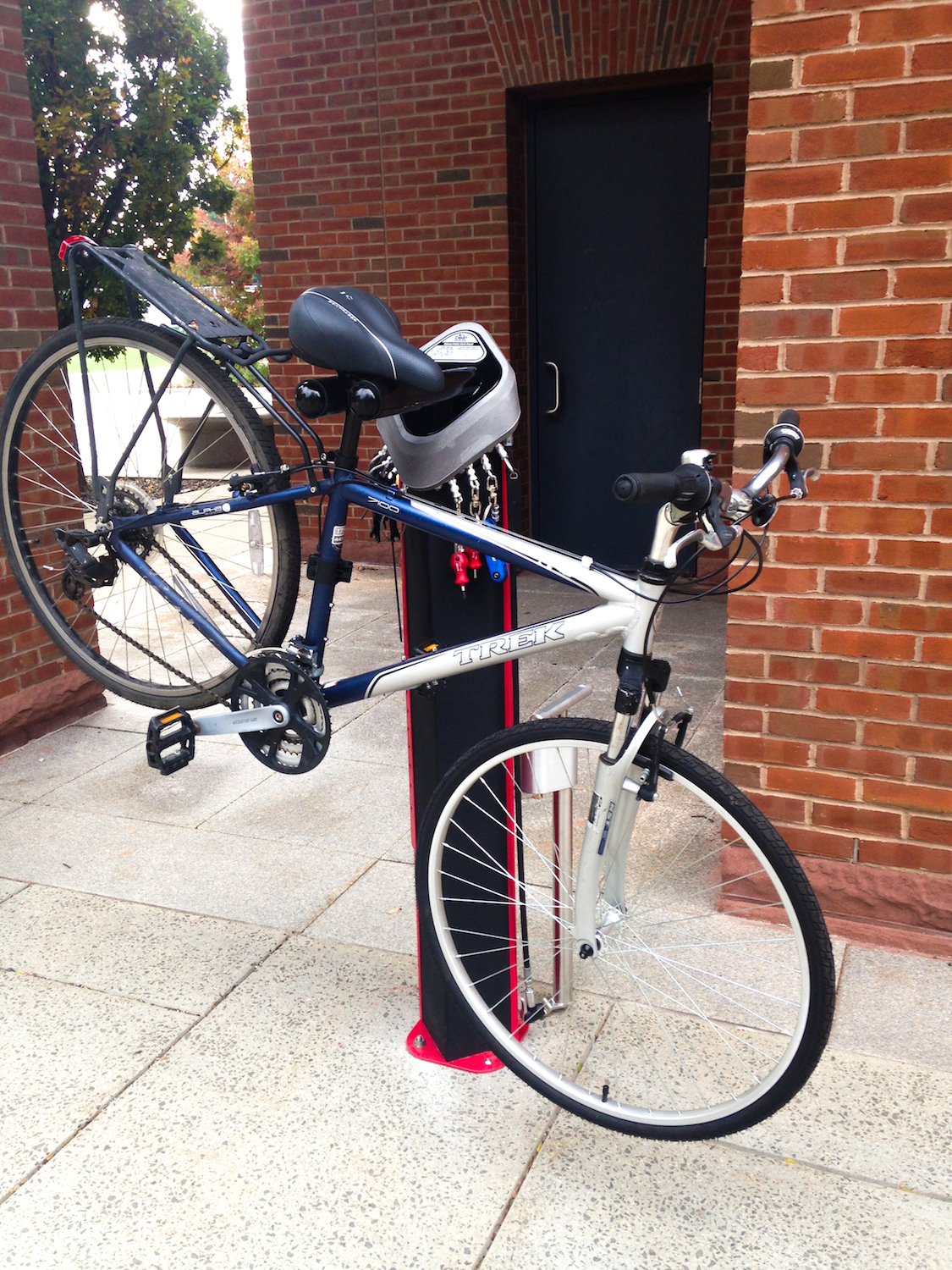 Hoping to ameliorate the cycling infrastructure at the University, Miles Hirozawa ’17 and Sonia Max ’17 have worked tirelessly with the University to install a bike repair station outside Usdan on the side of Boger Hall.

“Personally, the inspiration was derived from my four years of biking on campus and my frustrations with gaps in the cycling infrastructure at Wesleyan,” Hirozawa wrote in an email to The Argus. “I’ve had to go to Pedal Power on Main Street for minor repairs and service or to purchase tools to make the repairs myself. While this inconvenience and expense has been merely frustrating to me, I think there’s good reason to believe that it discourages students from bringing bikes to campus and riding them while they are here.”

Max highlighted the importance of facilitating biking on campus.

“I think that the presence of more bikes on campus is a manifestation of a campus culture that is concerned with living a sustainable lifestyle in terms of their own health and society,” Max wrote in an email to The Argus. “The permanence of the bike stand outside Usdan demonstrates an institutional commitment to sustainability as a value at Wesleyan.”

Nate Johnson ’17 explained why he opts to use a bicycle as a method of transit on campus.

“I decide to use a bicycle as a mode of transportation out of convenience,” said Nate Johnson ’17. “Living on Fountain Avenue is an awkward thing; while I am not totally removed from campus by any means, getting to class can still be a nuisance, especially since all of my classes are on the opposite side of campus, in Fisk Hall, Boger Hall, and the Davison Art Center.”

The plan to create a bike station began last spring, when the Green Fund announced that it would be sponsoring certain projects on campus.

“The idea was conceived of spontaneously last April,” Hirozawa wrote. “The Green Fund sent out an email soliciting ideas for projects that would promote sustainability on campus, and I decided to submit a proposal. The Green Fund makes the process relatively painless for people on campus with concrete ideas about sustainability. There’s a deliberation process, after which the Green Fund makes a decision of whether or not to fund the proposals. We found it useful to have price estimates for the whole project ahead of time.”

The repair station is located outdoors, and there will not be any restrictions on service hours.

“The stand has a basic set of repair tools and an air pump,” Hirozawa wrote. “Additionally the stand has an elevated grip that allows the user to repair the bike without having to bend down. Beyond that, we haven’t made any plans to add anything else.”

In terms of the actual building, Hirozawa and Max were on top of the project and reached out to Physical Plant last semester.

“We reached out to Joyce Topshe of Facilities and Michael Conte of Physical Plant as early as May,” Max wrote. “They were both supremely helpful in assessing the feasibility of the project and selecting the location for the station. Conte, specifically, coordinated the installation process once the parts had arrived.”

Hirozawa spoke to how the bike station will promote an essential mode of transportation at the University.

“One of our goals in this project was promoting a self-sustaining bike community at Wesleyan by passing on bike repair skills,” Hirozawa wrote. “Ideally, people will be able to use the bicycle repair station to fix their bikes on their own. Right now, we don’t have any system of monitors to facilitate that. However, through the Wesleyan Bicycle Cooperative, we have plans to organize bicycle repair clinics.”

According to Max, those looking for guidance at the repair station can scan a QR code with an iPhone to pull up a manual which explains how to use all the tools. However, in the future, there may be more help available to students interested in learning more about repairing their bikes.

Hirozawa believes that students respond to their environment and that the bike stand will positively alter the University’s environment. Furthermore, over the past few years, Hirozawa observed that students often post public messages on WesAdmits seeking bicycle tools and pumps.

“Unfortunately, they have had to rely on chance and the generosity of private individuals in order to access these items, until now,” Hirozawa said. “Moreover, I’ve noticed a disconnect between the progressive environmentalism that characterizes the campus discourse and the real daily practices of students, some of whom preach this message. The students on this campus have the ideological conviction necessary to make change and live sustainably.”

Hirozawa believes that the repair station will usher in an era of biking for the campus.

“By giving all students on campus public access to tools, regardless of their affiliation with a campus organization, the public bike station(s) will foster a grassroots bicycle culture,” Hirozawa wrote. “We also believe that the Wesleyan Bicycle Cooperative can house Wesleyan’s cycling community by bringing together students with an interest in bikes. This new social organization should be natural complement to the new physical presence that bicycling has on campus.”

Despite there being clear benefits to implementing a bike repair station, Johnson is not convinced that it will increase the amount of riders on campus.

“I think the creation of the bicycle repair station will only encourage the select few who actually do ride a bike on campus to continue with it,” Johnson said. “It is definitely a pain to have to lug a bike somewhere in Middletown in order to fix something that takes no more than 30 minutes. The repair station will definitely make the lives of bike riders easier, but I don’t think anyone who isn’t riding a bike would start to do so just because there’s a bike repair station, but I have been wrong about this kind of thing before.”