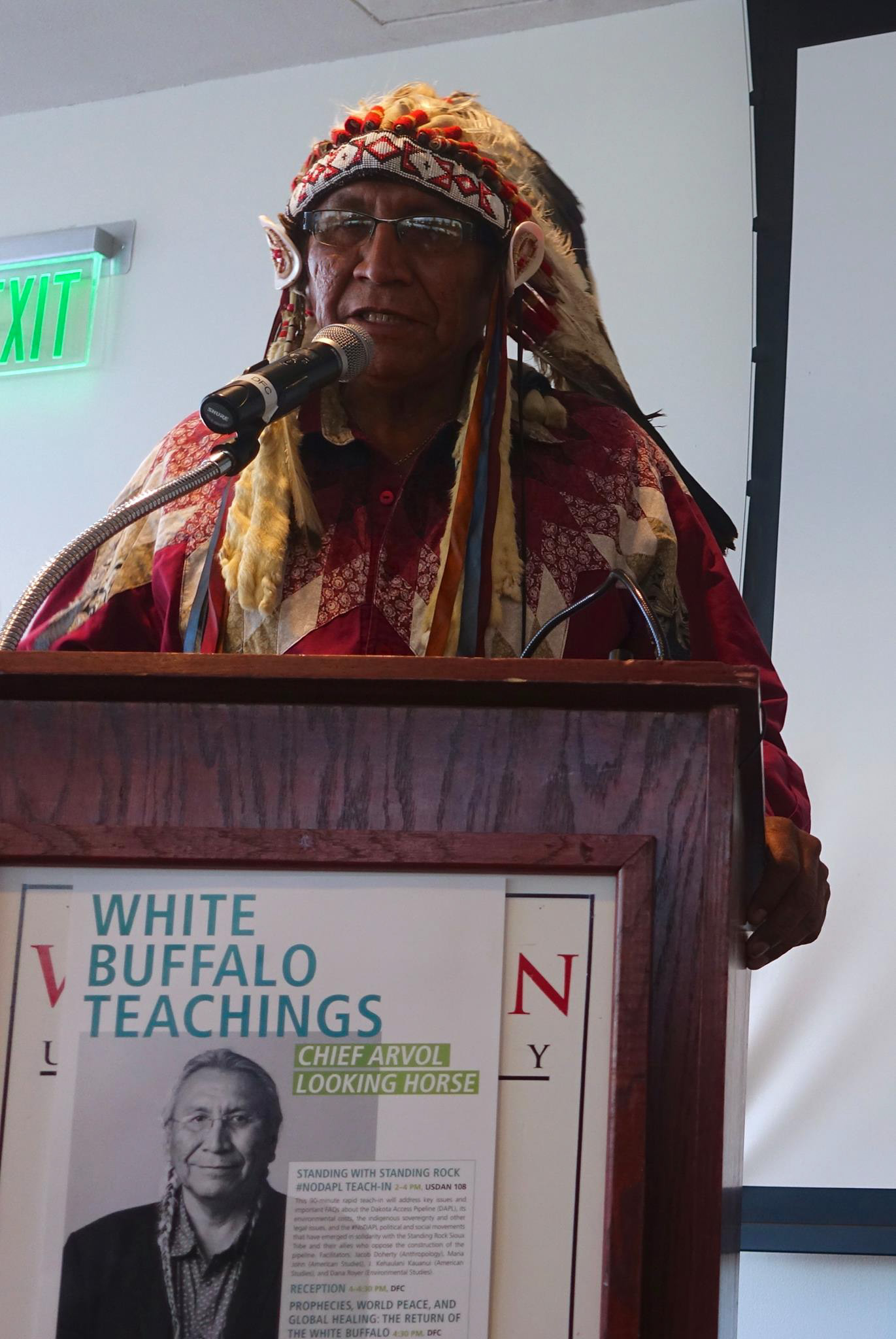 Following the “Standing with Standing Rock #NoDAPL Teach-In,” members of the University and greater Middletown community gathered in the Daniel Family Commons for a talk titled “Prophecies, World Peace, and Global Healing: The Return of the White Buffalo” on Friday, Oct. 7. Chief Arvol Looking Horse, the 19th keeper of the Sacred White Buffalo Calf Pipe and Bundle and Spiritual Leader of the Lakota Nation (Lakota, Nakota, Dakota) of South Dakota, and his partner Paula Horn spoke. The talk was sponsored by the Wesleyan Green Fund, the Center for the Americas, College of the Environment, Wesleyan Fossil Fuel Divest, Student Budget Committee, and Student Activities and Leadership Development.

Chief Looking Horse has opened prayers at the UN and was invited to speak at Bill Clinton’s 1997 inauguration. He is also the Spiritual Advisor of the Annual Chief Big Foot Ride, which memorializes Wounded Knee. He has traveled around the world spreading his message of climate change and the dangers of projects like the Dakota Access Pipeline (DAPL), which poses environmental concerns for the Standing Rock Sioux tribal lands and a larger region in the midwest.

Chief Looking Horse opened by acknowledging the traditional Wangunk homeland on which the University and the Middletown areas lie, and thanking the University for inviting him to speak.

“We’re at the crossroads,” Chief Looking Horse said, first in Lakota and then in English. “I speak my language first because this is who we are. We bring a message from our people back home….Either be faced with a lot of chaos, a lot of disasters, tears from our relatives eyes, different sicknesses, viruses, or we can unite spiritually in this global community.”

He told of the Lakota’s origins in Paha Sapa, known to Euro-Americans as the Black Hills of South Dakota. According to Looking Horse, a great race occurred, in which the animal nations claimed their boundaries. The Eagle Nation spoke to humanity, prophesying the current perils of disregarding their impact on the earth.

“The Eagle [Nation] told the people, ‘Someday you stop praying for us,’” Looking Horse recalled. “‘You stop offering your prayers and tobacco, or singing for us. That is going to lower us and lower us. Pretty soon we’re going to places where we have never gone before.’ Now at this time we have seen some things that we have never seen before….Boundaries are crossed. In the animal nation, their boundaries are crossed. When that happens we’re gonna see a lot of violence and anger.”

It is Lakota tradition to look seven generations ahead as a means of promoting its people’s longevity. However, Looking Horse noted that Lakota elders can barely see two generations ahead with acts of environmental degradation occurring around the world.

Looking Horse then brought his captivated audience back to the first generation of the White Buffalo Calf Woman.

“She was singing songs and up to this day we have those songs,” Looking Horse said. “We have seven ceremonies that came with the bundle and she came down…and she said…‘Pray to the grandfathers of the west, north, east and south, that only the good shall see this pipe. The bad shall not be able to see or touch it. That you will always maintain this Canunpa, this pipe. You are going to make relatives. You are going to respect everything that is….I shall return once again when nothing is good upon the earth, when brothers and sisters are fighting, when there is so much corruption that is happening. There’s gonna be earth changes, climate changes when I stand upon the earth as a white buffalo calf.’”

Looking Horse focused on the emphasis of money in society.

“Since 1994, almost every year, a white buffalo calf stood upon the earth,” Looking Horse added. “Many white animals have been born around the world….From here on, we’re gonna see a lot of changes on the face of the earth. It’s all about money. People be fighting over gold, then the black gold, the oil, and then the water is next, the blue gold.”

He also discussed the importance of resistance to DAPL in the greater context of the prophecy.

“People get up in the morning with not a good mind, [unlike] the way it should be upon Mother Earth to be in tune with this environment,” he said. “Now we are traveling all over the world trying to bring an energy shift upon the earth because we believe in our prayer that we can create an energy shift….Mother Earth is sick and has a fever and right now we are taking a stand at Standing Rock.”

“Early on in ’96 everyone was living the good life…not really paying attention, including our own people,” Horn said. “So we made a great effort to go to the four directions and to plant a seed of the sacred prayer because the fire is universal.”

She continued, cautioning the audience to look beyond mainstream media, discussing specific examples their surface-level reporting.

“What about Flint, Michigan?” Horn asked. “Please know and believe that the media is not telling everything. There are a lot of babies that die from that water. You only hear the surface. What about the Gulf of Mexico? Obama just opened it up for bid again….Go to the east and you have Fukushima. Do you guys think it’s taken care of? It’s not. It’s still dumping. What is it, 80 tons of radiation into the Pacific Ocean? And they don’t even [report it].”

Horn expressed her determination to make people conscious of the idea that the global community has gone too far in altering the climate.

“Since we started this in ’96, I’ve heard scientists say we’re at a point of no return,” Horn said.

The mood in the room began to shift from fear and anxiety to hope when Horn stressed the important role that young people have in this awakening and consciousness-raising effort.

“As we went around the world, it was the young people, whose minds are still not contaminated,” Horn said. “When you grow up, little by little, you contract the disease of the mind. And it’s up to you, it’s really spirituality, to get rid of it.”

“[Your spirit] goes all the way back to where you’re indigenous to,” Horn said. “You have a responsibility. So that’s what our work with World Peace and Prayer Day has been, to go around the world and say: ‘You are indigenous.’ Being indigenous is having a responsibility to the earth and understanding that she’s alive, not something to conquer. Arvol always says she’s a source, not a resource.”

Horn stressed that students should pay attention not just to Standing Rock, but also to local issues that impact individuals personally.

“You guys gotta wake up to what’s going on in your backyard,” Horn said. “There’s more than just socializing in a way where you end up abusing each other. You guys have a responsibility….What’s going on in Standing Rock was because some young kids ran to Washington D.C. and they prayed and they invoked something inside themselves, something we all have. To connect that umbilical cord to the world. And the people listened.”

Abby Cunniff ’17, who helped run the logistics of the teach-in and talk, offered her thoughts in an email to The Argus.

“I’m still thinking through many of the things that the chief said and am really thankful that I got to hear his thoughts on spirituality in the context of environmental destruction, because I haven’t figured out exactly how I relate spirituality to this issue,” she wrote.

Other members of the University community discussed how they grappled with the calls to action.

“I’m reconsidering the importance of spirituality and how that might potentially play an important role in my life,” Ingrid Eck ’19 said.

Horn ended the talk on a hopeful note.

“I believe that we can change this,” Horn said. “It’s our responsibility as the two-legged…being leaders. All of us are supposed to be leaders, that’s the way our culture is. We’re not about this hierarchy. Arvol isn’t up here for us, he’s the center. And he’s only the center because he’s taking care of something for us that belongs to us. We’re all around him, we’re a hoop. There’s no hierarchy.”