As scores of prospective students and their parents descended on campus for the Office of Admission’s Open House, members of a newly formed student union gathered in strategic locations with a coordinated plan.

In response to the recent revelations surrounding former Dean Scott Backer’s past of sexual misconduct and subsequent firing, students staged a series of protests on Monday to protest what they see as broader problems within the University’s administration.

The earliest protests involved disrupting campus tours, with the biggest cohort of protesters waiting in the lobby of the Exley Science Center, where an entire window was saturated with anti-administration flyers. Elsewhere, protesters hung a banner that read, “In the legacy of Columbus, Wesleyan’s administration participates in violence against indigenous people,” created installations informing viewers about indigenous remains in Exley, and taped fake checks made out to University President Michael Roth with his current salary to an ATM machine. 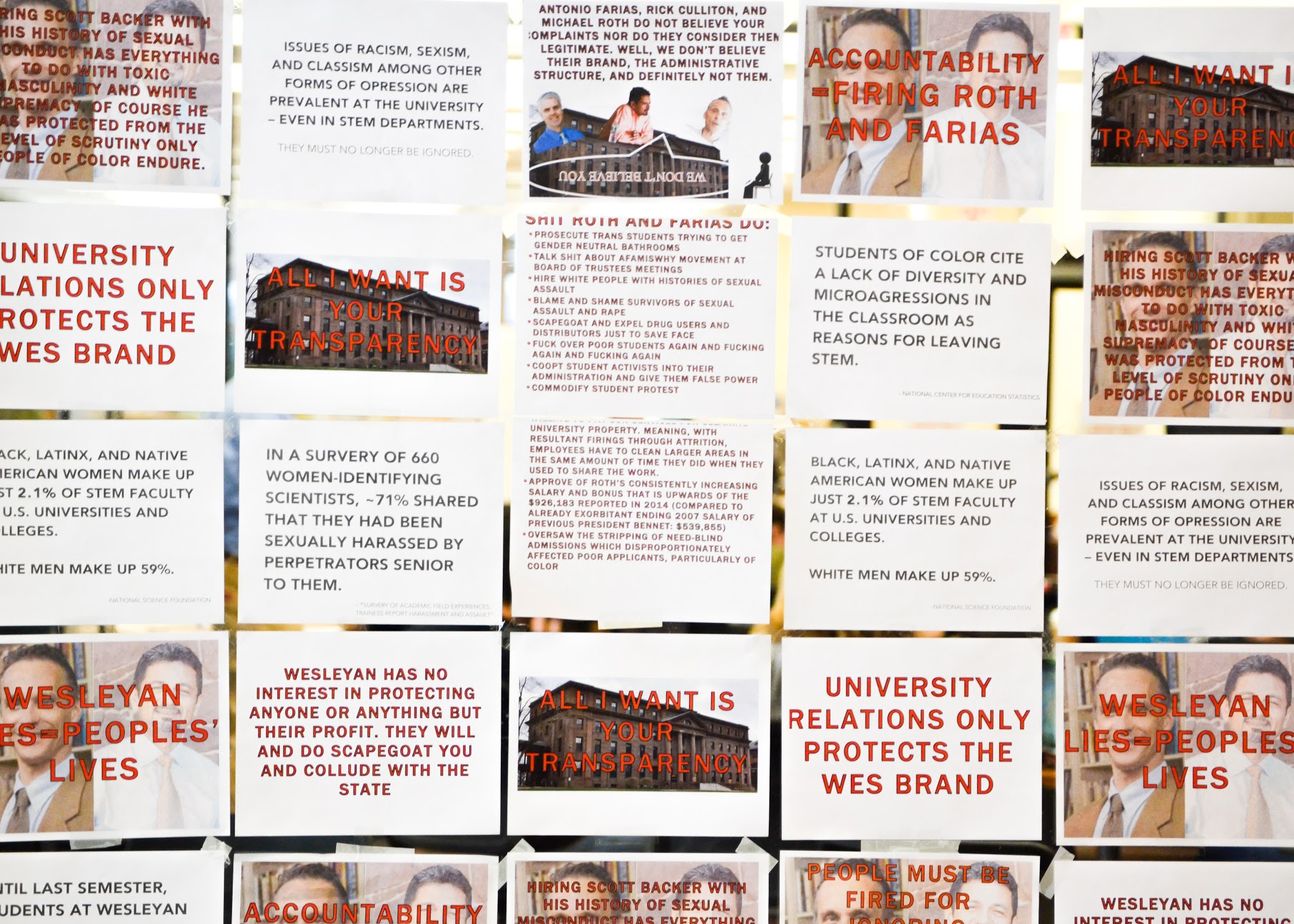 Posters covered a wall in Exley.

The script from which tour interrupters read included information about the Backer firing, statistics about sexual assault on campus, and accusations of the administration’s trivialization of African American Studies.

Shortly after the first tour of the day passed through, however, student tours began avoiding Exley entirely. According to multiple student tour guides, avoiding protesters in the science center was an order from their supervisors.

“We were told that the center of protesting seemed to be in Exley, and therefore to avoid that stop on the tour altogether and instead discuss the sciences while still in Olin,” said a tour guide who wished to speak under the condition of anonymity. “When I went to lead my tour group out of Olin, the protesters actually stood in front of the door, physically preventing us from leaving so that they could talk to the visitors. At the end of our tour, while we were standing in Usdan finishing up, a few protesters started shouting over mine and another guide’s voice as we attempted to finish up the last few minutes of the tour.”

Director of Admissions Nancy Meislahn denied that any orders were given for tour guides to avoid Exley or any other normal stops, citing what she saw as a successful Open House.

“Here’s what I know: we had an overall successful Open House,” Meislahn wrote in an email to The Argus. “Standing Room Only at the welcome session this morning, good crowds and positive feedback throughout the day.”

Meanwhile, outside North College, also in the path of tours, students stripped down to engage in a performance art protest. Positioned in front of chalking on the ground that read “reject administrative gaslighting,” various nearly nude students took turns lying down with their eyes on an altar surrounded by candles and flowers in vases. Avigayl Sharp ’17 and Amy Mattox ’17 were among the organizers and said the demonstrations would continue until tours ended in the late afternoon. Mattox explained the piece.

“In rendering pain visible we are trespassing something,” she said. “Violence and pain may be materially obvious, but they may also be subterranean, embedded, invisible to the viewer, and of course, they might at any time be both. To make interruptive installation ‘artwork’ or ‘protest’ in the wake of this pain, of this violence, is to render them in some manner. We are not making our bodies a metaphor; our bodies HAVE been sites of violence, our bodies HAVE been pained, have lost.”

Mattox elaborated on one of her anxieties.

Michelle Fisher ’19, one of the students on the altar, shared what the protest meant to her.

“The symbolic meaning of this protest is that the University sacrifices victims of sexual assault in the name of its own image and reputation,” Fisher said. “We wanted to make the symbolic image of our pain visible.”

A flyer distributed by students positioned around the altar shed more light on the motivations and emotions behind the protest. 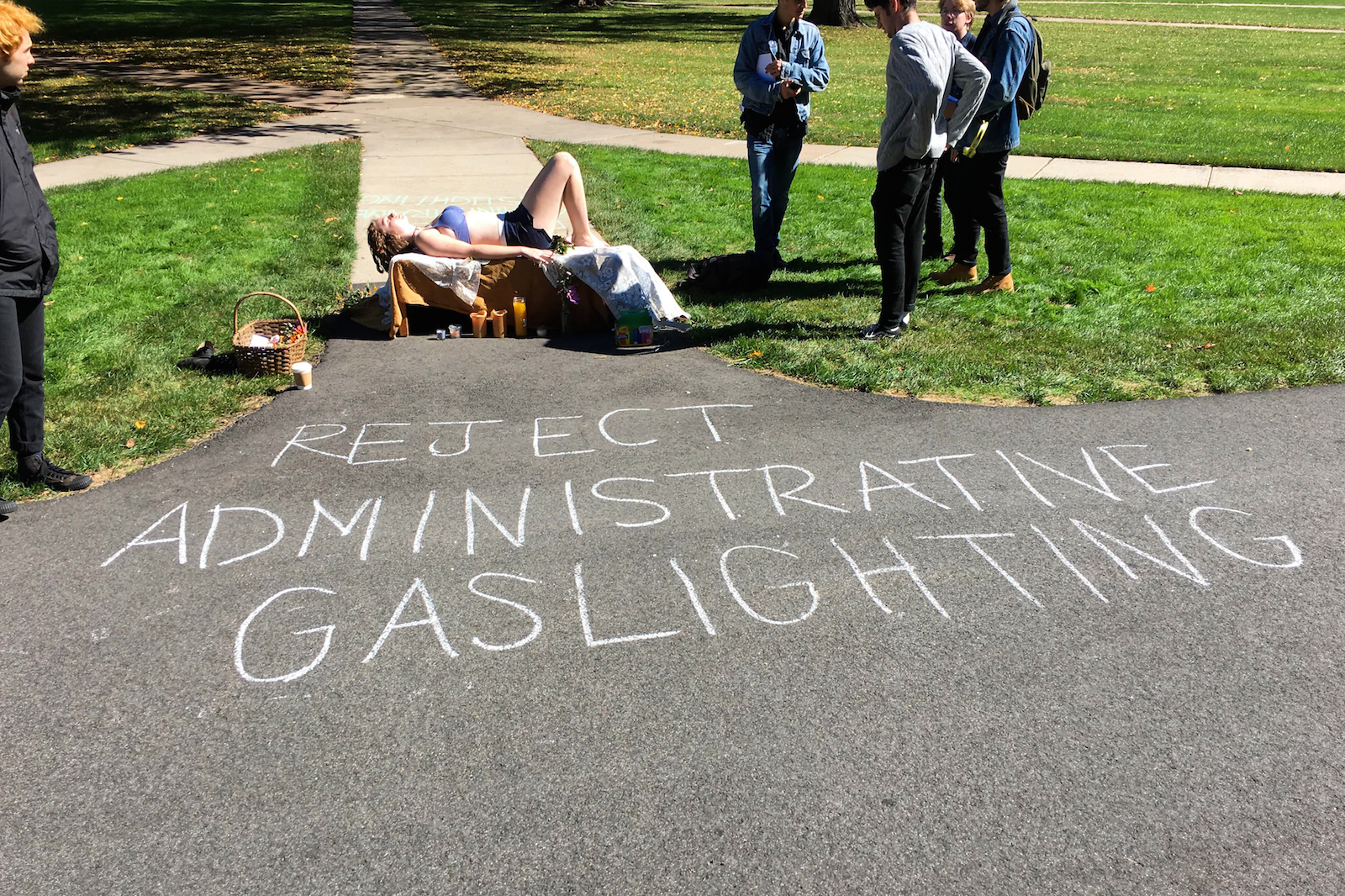 Students created an altar as an interruptive installation project.

“I got involved because a lot of people that I really love are directly impacted every day by what happens here, and the inaction of the administration,” said Jack Singer ’18, who was one of the demonstrators handing out flyers. “For a lot of people, they have no choice but to act. I wanted to support in any way I can.”

A public safety officer surveyed the scene and spoke into his microphone at one point to report the chalking. It would be removed later in the afternoon but soon replaced with chalk reading, “Stop silencing us.”

Taking over “Roth on Wesleyan”

The afternoon brought another demonstration. From 1:30 until 2:30 p.m., when Roth was slated to give a talk called “Roth on Wesleyan” to prospective students and their families, protesters filled the area outside Beckham Hall handing out slips of paper with questions they suggest these prospective students ask Roth during the talk’s question and answer section.

“How many perpetrators of sexual assault have you expelled in the last 3 years?” read the first question. Others included, “What would have been a compelling reason to make [former Associate Dean of Students Scott] Backer’s firing public?” and “Why doesn’t Wesleyan have a resource center for students of color?”

After Roth had been introduced, the approximately 45 protesters, most of whom held posters bearing slogans such as, “Roth protects rapists,” “Accountability NOW,” and “Diversity is more than a number,” silently filed into Beckham Hall and lined the perimeter of the room.

Roth continued without comment, but a few minutes later indirectly acknowledged the protesters. In response, one protester, Zeno Scott ’18, bent over and retched.

Soon after, approximately nine minutes after he had begun speaking, Roth abruptly ended his speech and, abandoning the question and answer session that was slated to follow, quickly exited Beckham Hall down the center aisle. Yael Horowitz ’17 made her way to the front of the room.

“If you have any questions that Michael Roth won’t answer, we’re willing to answer them,” she said. “I want to talk to you. I’m here, and I’m not going to run away if there are hard questions.”

In the 45 minutes that followed, student protesters entertained questions from prospective students and their families, passing microphones around the room from visitors to demonstrators. One of the first questions came from a parent who wanted to know what, specifically, the protesters were demanding that the administration had not provided. 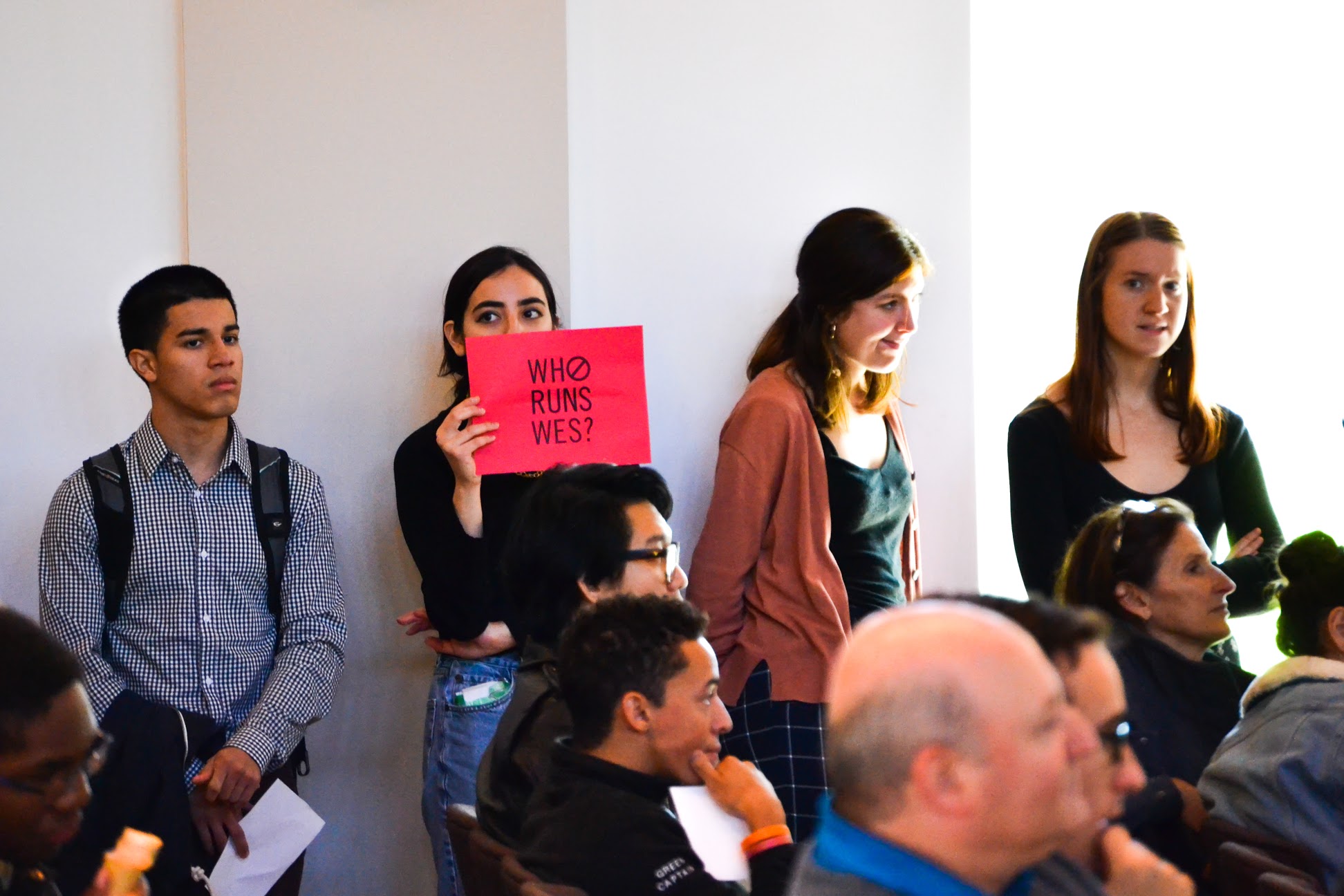 Demonstrators lined the perimeter of Beckham Hall to interrupt the talk “Roth on Wesleyan,” aimed at prospective students and their families.

“We’re asking for a Title IX coordinator who is receptive to sexual assault complaints and doesn’t actively discourage students from reporting,” Julia DeVarti ’17 answered. “We’re looking for accountability structures. Right now, there’s no way to give feedback to the administration. The only people giving feedback to the administration is the administration. We are looking for support in academic fields that recognize underrepresented histories, so that’s AFAM [African American Studies], Asian American studies, disability studies, urban studies.”

DeVarti also touched on the importance of hiring an advanced practice registered nurse, or an APRN, to prescribe medication as part of the Counseling and Psychological Services.

In response to a question about student-created support systems, given the lack of a women’s resource center or a multicultural student center, Aviv Rau ’19 spoke to the strength of student support.

“The people in this room, and the people outside of this room, have been way better resources for me than any other kind of official resource provided by the university,” Rau said. “When I’m in rooms like this, I feel like I would absolutely do it all again. Despite the things that have happened to me here, and despite the things that have happened to other people here, I think that the students here are extraordinary.”

A prospective student questioned whether the movement had gone too far, pointing out that the University has the reputation of being diverse and liberal. Scott responded by deconstructing the definitions and connotations of those terms.

“I don’t think that what we’re saying is a common narrative,” Scott said. “I think that we do hear very commonly that Wesleyan is a liberal and diverse university, and one of the things that a majority of us feel is that ‘liberal’ and ‘diverse’ are not positive terms.”

Scott continued that although the University is safer for many students than other universities might be, this relative safety should not deter activism.

“There’s not time to be complacent,” they said.

After the “Roth on Wesleyan” talk ended and prospective students, their families, and protesters filed outside, Sharp and Taina Quiñones ’17 reflected on the power of the interruption.

“Michael Roth left,” Sharp said. “The protest made him really uncomfortable, and he left a roomful of prospective students and their parents sitting there without giving them the time he had promised them, which I think is so indicative of the silencing and the inability to account for the actions we are calling out.”

“The fact that he couldn’t even bring himself to stay in a room of students just shows that he’s scared, that we have power, and that he doesn’t know what to say when his press people aren’t with him,” she said. “Even in that meeting, he was trying to commodify the protest that we were having in that room….We got him to leave, and we were able to have a direct conversation with prospective students.”

Members of the student union have promised more actions in the future, but plans remain under wraps.