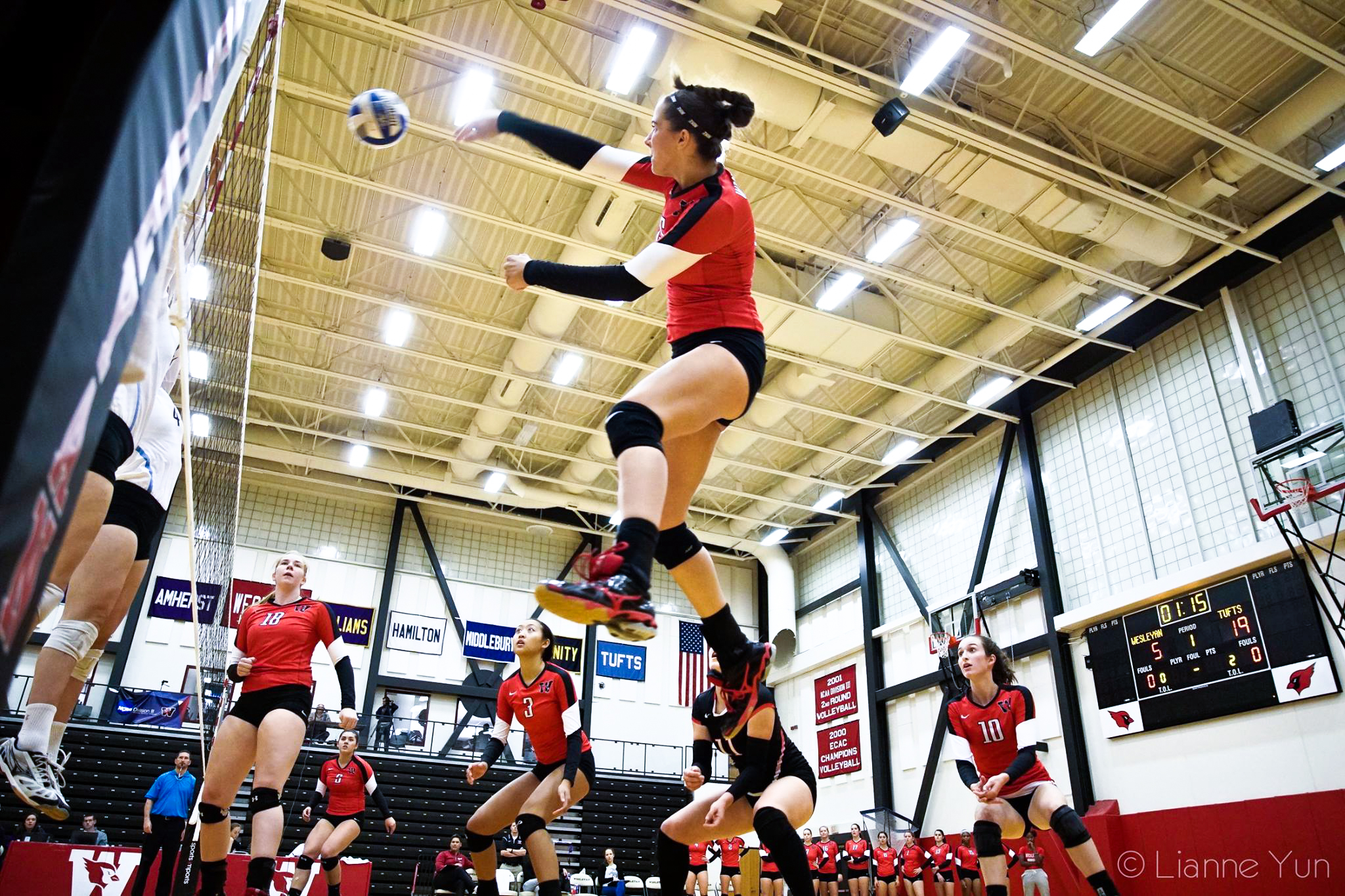 Despite only having played 11 matches, volleyball has already shown marked improvement compared to last year’s campaign. Going into its weekend matches, the team boasted an 8-1 record and was undefeated in NESCAC play. However, the squad’s NESCAC dominance ended this weekend as the Cards suffered two tight conference losses at home. On Friday, the team managed to force a fifth set against Tufts but couldn’t pull out the win. The team’s struggles continued on Saturday against Bowdoin when it lost in four sets against last year’s NESCAC champion.

Despite the weekend’s results, volleyball’s current 8-3 record and 3-2 NESCAC record is far better than its record at this point last year, which was 4-7  overall and 1-4 in NESCAC play. In fact, the Cardinals have already surpassed last season’s win total of five games. Additionally, the team had significantly more competitive matches this weekend against Tufts and Bowdoin than it did last year when Wesleyan could not steal a set from either team.

Last week, Head Coach Ben Somera emphasized how taking time to get to know the team has allowed him to identify its points of strength and weakness.

“After a year of observation, we’re now trying to improve each week and progress toward our goals,” Somera said.

When asked about any specific differences between this year’s squad and last year’s, Somera emphasized offensive progress.

“[Last year] we didn’t know how to finish,” he said. “[This year] we’re still trying to get our full offense installed.”

Somera also credited the program’s improvement to a strong recruiting year that has given the team more depth than it has enjoyed in the past. He emphasized Wesleyan’s academic reputation as critical to attracting more athletic talent.

“Recruiting is the lifeline to the program,” Somera said. “It’s a huge advantage to be at such a reputable academic institution.”

Many of the recruited players have quickly found their way to starting positions on the team. First years Gabby Bennett, Olivia Guidotti, Nicole Hilton, Audrey Konow, and Stasie Litinsky all started against Tufts this Friday.

“They’ve earned their spots during practice and through their performance [on court],” Somera said when asked about the rookie-heavy lineup.

The team’s depth has manifested itself in an ever-fluid starting lineup.

“Only the middle blockers are solidified as starters,” Somera said. “We’ve been consistent with one of our left-side [outside hitter] spots with Sarah Swenson ’18 and Madeleine Lundberg ’19.”

Another team accomplishment this season is Bennett being named NESCAC Player of the Week by virtue of her performance last week. Coach Somera highlighted her achievement, as well as the instrumental role her team played in it.

“I think it’s great for Gabby, but I also think it’s a great honor to the team, especially with the passers and setters,” Somera said. “Part of what makes Gabby successful is that someone had to pass it or dig it. Individual success is a byproduct of team success.”

Somera also gave credit to members of the squad who have pushed the starters in practice and forced them to earn their reputation.

“Both Gabby and Nicole [Hilton ’20] have been doing really well, but what helps them is the two middle blockers from last year to practice with every day, Naja Lewis [’17] and Emma Robin [’19], and Fallon Konow [’20],” Somera said.

Somera also discussed the stress on net play in practice this past week.

“We focused this week on stretching the net and having our middle blockers attack behind the setters,” he said.

Improvement in this aspect of net play could be seen against Tufts with Wesleyan’s blockers cutting off the opponent’s angles at net. However, the Cards’ net players still struggled against the walloping serves and spikes of Tufts players Brigid Bell and Mackenzie Bright.

Somera had also emphasized the necessity of keeping hitting percentages up, especially with the middle blockers. The importance of this was illustrated in the Bowdoin match. The Cards recorded by far their best hitting percentage of .270 in the second set, this set being the only one the team won.

The Cards will hit the road next Friday to play Bates. On Saturday, the team will head to Waterville, Maine to play Colby and Babson College.

One of Somera’s key points about the season was maintaining the team’s growth in both victory and defeat.

“We will continue to manage intensity and continually grow towards the end of the season,” he said.