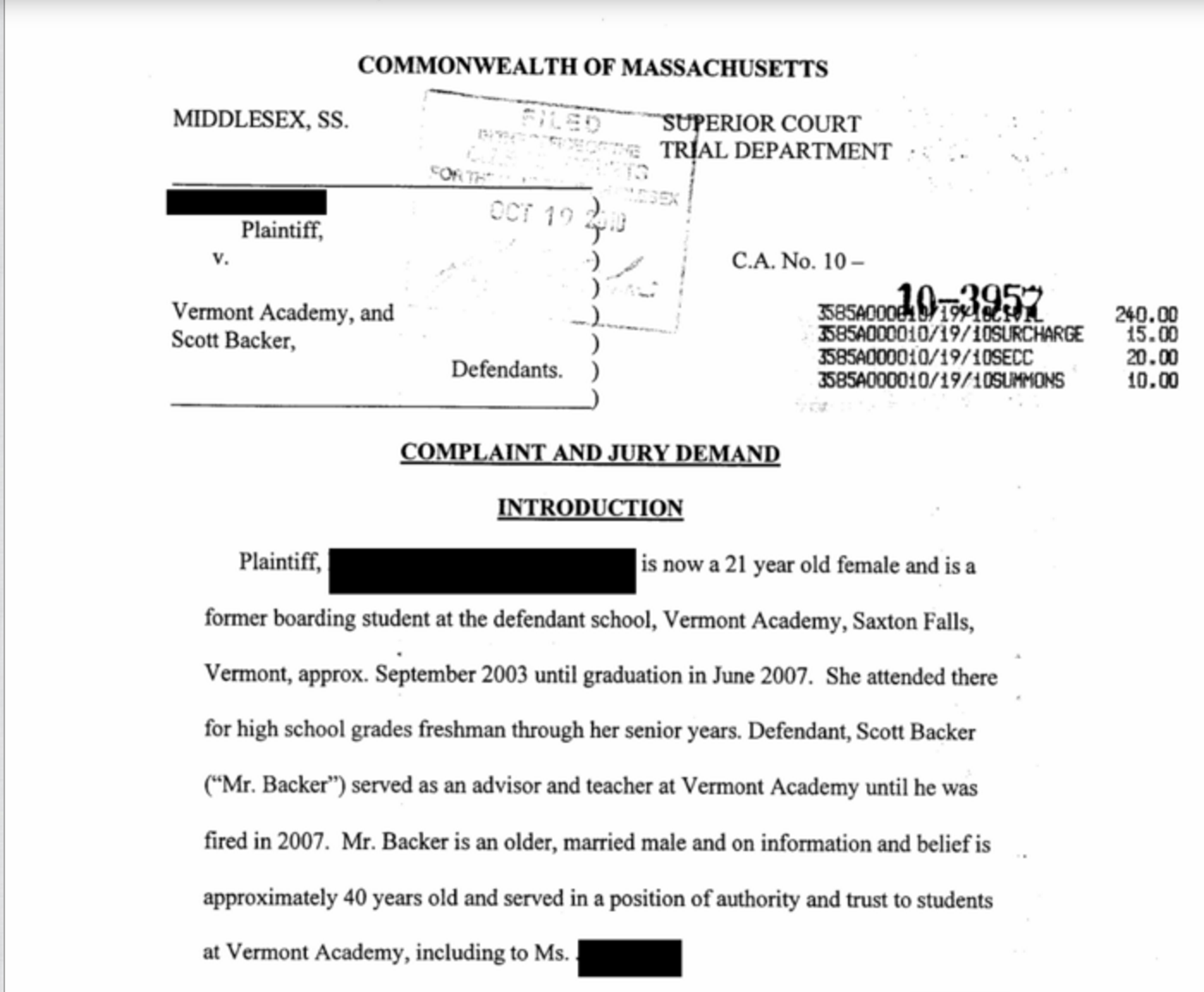 Scott Backer, former Associate Dean of Students, was fired by Wesleyan within hours of a press inquiry into allegations of sexual misconduct during his time at Vermont Academy in Saxtons River, according to a report by The Boston Globe‘s Spotlight Team. Published on Oct. 1, The Globe report details how several private high schools and universities unwittingly hired professors and administrators with a history of sexual misconduct.

In 2007, Backer was dismissed from Vermont Academy after allegedly “propositioning” a 15-year old former student with a multitude of text messages, according to The Globe and court documents. That same year, he was hired by Wesleyan as assistant dean of students. The suit was settled out of court in 2011, before Backer was promoted by Wesleyan over the summer of 2012. In 2014, Backer won a Cardinal Achievement Award for his work completing a federally mandated campus crime report.

According to Lauren Rubenstein, Wesleyan’s director of communications who is currently on maternity leave, the University had no knowledge of the reasons behind Backer’s dismissal.

“Had we been aware of this, Mr. Backer never would have been hired,’’ Rubenstein wrote to The Globe in an e-mail in July.

Though Vermont Academy fired Backer over allegations of sexual misconduct, two deans from the prep school wrote letters of recommendation supporting him when he applied to Wesleyan. Newly hired interim Head of Vermont Academy Stanley Colla explained that the 2007 endorsements were “unauthorized letters” but refused to elaborate, according to The Globe.

Upon learning from The Globe about Backer’s past, Wesleyan promptly dismissed him.

“Hours after the Globe inquired about Backer’s past, Wesleyan fired him and promptly hired a law firm to review about eight years of misconduct hearings that Backer participated in,” the report from The Globe’s Spotlight team reads. “The review concluded he handled those hearings properly, according to Wesleyan. Backer did not respond to repeated requests for comment.”

According to court documents, the plaintiff in the case against Backer published her interactions with him on Facebook to third parties.

In a blog post published Sunday, President Michael Roth ’78 reiterated that Wesleyan had no prior knowledge of Backer’s behavior at the Vermont Academy and explained the rationale behind the University’s hiring a firm to investigate.

“Since as Associate Dean he sat on and often chaired panels dealing with sexual misconduct, we hired an independent firm expert in these matters to review his performance,” Roth wrote. “I should stress, though, that Mr. Backer never had sole authority over cases. He was part of a process involving several people and appropriate balances. Nonetheless, we turned to the law firm Pepper Hamilton, who most consider the best firm in the country for these kinds of issues, to investigate cases with which Mr. Backer was involved. We were very relieved to learn that they found nothing amiss.”

On Monday, Oct. 3, Roth sent a follow-up email to his Sunday blog post. Writing the subject line “An Apology,” Roth continued on to express dismay at Wesleyan’s hiring of Backer.

“I realize that in the blog post I wrote yesterday upon returning to campus, I neglected to say the most important thing: I am sorry,” he wrote. “I apologize that the university hired someone who had been fired for grossly inappropriate behavior and put him in a position of responsibility for dealing with survivors of sexual assault. The university did not know his past, but we needed to know. We failed at that, and I apologize for the pain this has caused members of our community.”

Many students and alumni, however, quickly reacted on social media, with multiple individuals expressing outrage over Wesleyan’s hiring of Backer and a lack of disclosure concerning the full circumstances of his dismissal over the summer.

“How can you trust an institution that doesn’t do a background check on its employees?” asked a student who preferred not to be named. “At what point are we going to consider that we shouldn’t have straight white men in this position anymore?”

The student also expressed concern with Wesleyan’s lack of transparency about Backer’s firing.

“Were they never going to tell anyone?” she asked. “They just replaced him in June. We have to find out through a press release? Why not send out a message in solidarity with survivors who had to be around this gross dude?”

Another student who also declined to give her name noted Backer’s many years of taking decisive action in cases that had profound effects on students’ lives.

“[There were] years of him being in charge of all these cases,” she said. “How do you account for that?”

Having just returned from Bejing in an interview on Monday amid widespread outrage, Roth expressed empathy for survivors and regret over Backer’s tenure.

“I think that dealing with the aftermath of sexual violence is hard enough, and the worst part of this episode with Scott Backer is that we are adding to the anguish that some of those people feel,” he said. “That’s one of the things I most regret about the current situation.”