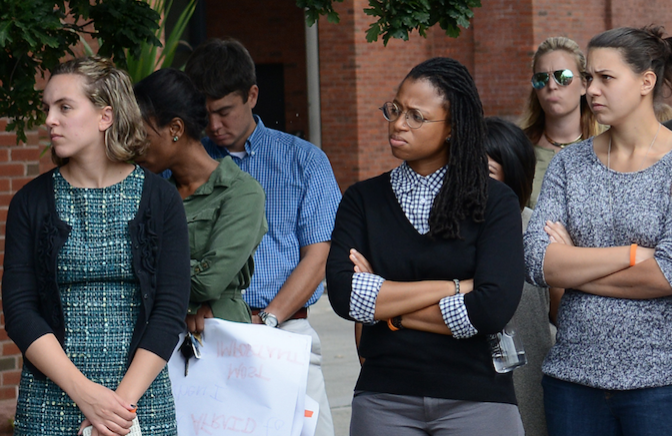 The University held a solidarity gathering on Tuesday, Sept. 27 at noon in the Huss Courtyard outside Usdan. Organized primarily by Vice President of Student Affairs Mike Whaley, the event held a moment of silence for those lost to police brutality and systemic racism.

Lasting just under five minutes, the moment of silence brought almost all action around Usdan and North College to a halt until the South College bells began to play “We Shall Overcome.”

The event was well attended, and a little more than half of those present were faculty and administrators. Tracey Stanley, Administrative Assistant to the Chief of Staff in the registrar’s office, felt that something needed to be done on campus by the administration after the Tulsa shooting of Terrence Crutcher.

“Over the past couple of weeks, especially with the Tulsa shooting, we’ve been outraged at other events, but this one just felt like the nail in the coffin,” she said. “I felt like we needed to do something, but what that something was, we didn’t know what it was.”

Stanley was glad that the highest levels of the University’s administration wanted to organize an event for the entire community. Standing at the front of the crowd, she could be heard singing “We Shall Overcome” when the bells chimed in, eventually being joined by other faculty members and administrators as well as some students.

“When I got the email from President Roth about the solidarity, that made me feel like it was a step,” she said. “So coming here and doing the moment of silence, for me, I went into prayer, but I said to my colleagues, ‘I feel like we should sing “We Shall Overcome,” but I can’t sing!’ So then the bells started to ring, and it was the song and I was like, ‘I can’t sing anyway, so I’m just going to sing,’ so that was kind of like a soothing tone for me to just feel like, my prayer was that peace surround this nation, and our country.”

Along with the heavy faculty and administration presence, many students joined in the solidarity gathering, including several first-years. Though they acknowledged that they have much to learn about the University’s social environment and history of racism, Afrah Boateng ’20 and King Emeka ’20 both carried lived experiences with racism to the moment of silence, coupled with their initial perceptions of the University, that informed their opinions on the effectiveness of the event.

“I just strolled by and decided to stay,” Emeka said. “It’s obviously symbolic, but it’s good to take time out of the day to think about these things.”

Emeka noted that a general lack of empathy and support for students of color is one of the things many upperclassmen at the University see as one of the greatest challenges facing the community, but he was hesitant to draw any firm conclusions this early in his college career.

Boateng, who lives in 200 Church, talked about the support she feels among her peers in a dorm that focuses on issues surrounding social justice.

“I honestly do feel support, but maybe that’s because I surround myself with like-minded people who I feel…are supportive,” she said. “I live in the social justice dorm, and we’re always talking about good things. I’m also taking [a Feminist, Gender, & Sexuality Studies] course on intersectionality and feminism, so I feel supported there, and I haven’t put myself into any super-duper conservative spaces yet.”

Boateng added that the University environment can be more supportive than home for her.

“I feel more support here than I do back home, and I live in Newark, [New Jersey], a mostly black city, but I feel like there’s just a lot of ignorance,” she said. “I feel like people are more woke here.”

Students have organized events to call attention to issues of systemic racism and police brutality in the past without the help of the administration, and this year was no different. Last week, a student-led rally was held in Usdan in which students wore all black to call attention to the most recent wave of shootings and issues facing people of color more broadly.

Whaley was aware of the event, but he still felt the need to plan a solidarity gathering.

Whaley also said that the event was organized to not conflict with the national boycott day that took place on Monday.

As the crowd dispersed, Whaley wanted to look toward the future in the administration’s role in raising awareness for issues facing people of color and supporting students of color.

“I’m glad that the people who were able to come today were able to come, and we’ll work on distributing the rest of these and getting folks to pause and consider what they can do,” he said.