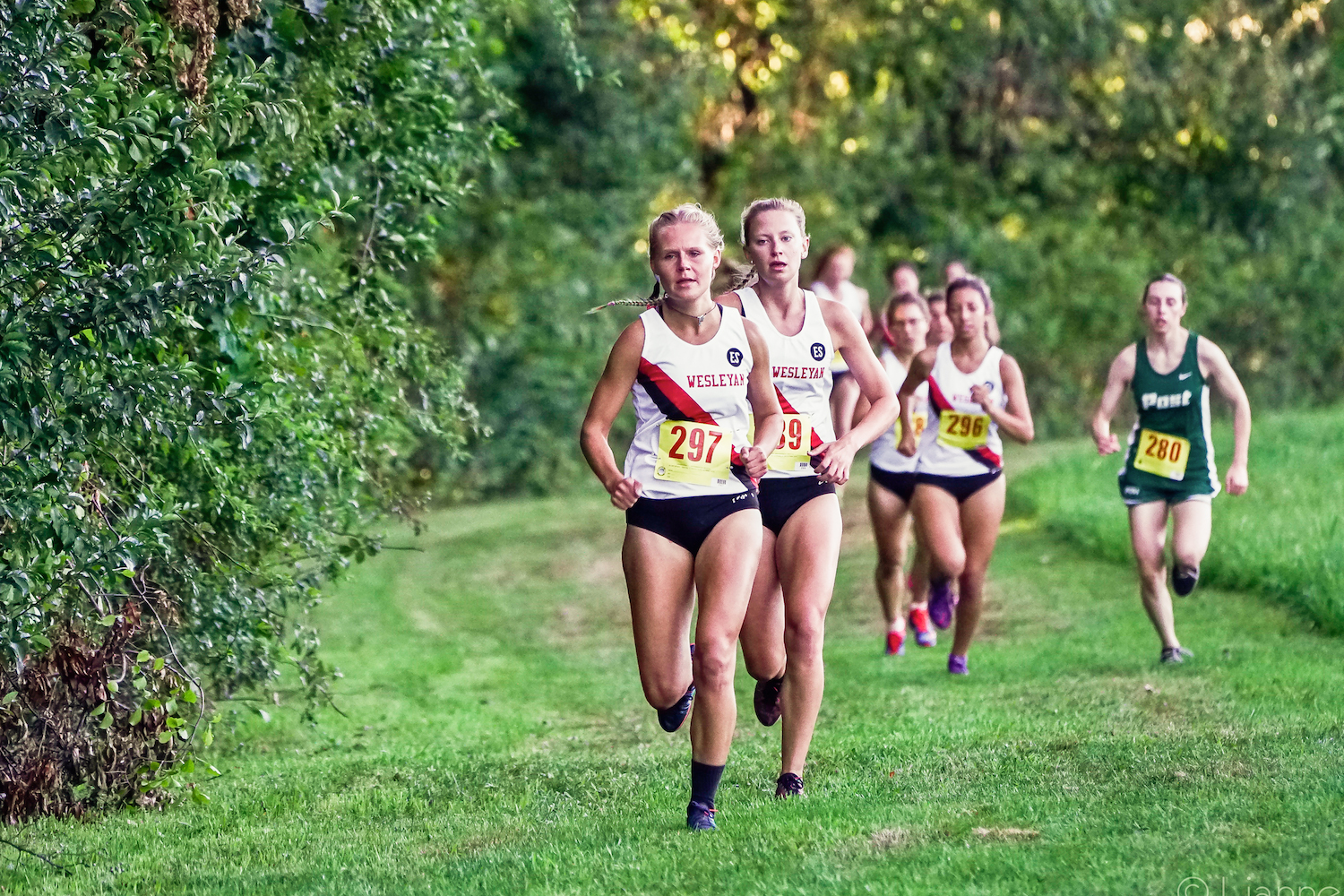 “It was nice to work all summer and see it come to a good place,” Pinsonault said.

For Wesleyan, the race served less as a competition and more as a diagnostic to better gage the state of the team.

“We can compare our times to previous years, so even if we’re not competing against other people, we’re competing against the clock,” Elmendorf said. “The team results from this race are exciting because our average time for the top seven is faster than last year, so we’re looking to improve on our NESCACs and NCAA regionals performances from last year.”

The improvement that Schassberger described is stark. Last year, the average scoring Cardinal ran 19:15.21, while this year the average scoring runner ran 18:57.68, more than 17.5 seconds shaved off the time for each runner compared to the same point last year.

“There were a lot of people who did better this year than they did last year,” Pinsonault said.

Wesleyan is one of the smaller teams in the NESCAC. For example, Amherst has 22 female runners compared to Wesleyan’s 15. Elmendorf highlighted this as a strength, however, rather than a weakness.

“The fact that our team is small compared to our competition is an advantage to us,” she said “It means that we can have more personalized training plans and also that we can know all of our teammates really well and work together and support each other better.”

However, this poses a danger in removing some depth from the team. A season of intense mileage can take a toll on anyone’s body, and if some key runners succumb to injury the Cardinals have fewer replacements waiting in the wings.

The meet also marked the team’s transition to the competing portion of the season, when competition within the team can be damaging to the group dynamic. Elmendorf says this is not a concern for the Cards.

“For most of the team there isn’t much of a conflict,” said Elmendorf. “Our competitiveness with each other is left on the course. None of us want our teammates to do badly so that we can beat them; we always want everyone to have the best race possible, and so we don’t focus on our finishing order.”

The race also marks the formal introduction of throwback jerseys to be worn only this year, in honor of Elmer J. Swanson, who previously coached the team and passed away this spring. The jerseys are in a style reminiscent of those worn when he began coaching the team in 1963. Swanson served as President of the New England Division III Track and Field Coaches Association. In 1993 he was named NCAA District I Division III Cross Country Coach of the Year, before being inducted into the Wesleyan, Middletown, and Portland Sports Halls of Fame.

The runners on both the men’s and women’s teams continue to prepare for the Paul Short Run on Saturday, Oct. 1 at Lehigh University’s Goodman Campus. 48 Division III teams will compete, including NESCAC competitors Tufts, Williams, Middlebury, Trinity, and Conn. College. Williams won the NESCAC for both men and women last fall, and enters the season as the favorite to retain its place atop each leaderboard. The Wesleyan men are hoping to move closer toward the top of the division after their sixth-place finish at the NESCAC championships last year, while the ninth-place women hope to leapfrog teams like Bowdoin and Colby, who are well within their sights.