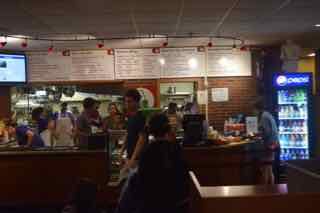 WesWings has recently been named a “Top Breakfast Spot for College Students” by ExtraCrispy.com, but the campus hub does far more than serve up Breakfast Pails.

The review on the underground food site gave a brief overview of the University’s beloved ’Swings.

“Though the main menu item is wings, the infamous Breakfast Pail has been curing Middletown hangovers for 25 years,” the listicle read. “The Breakfast Pail is a true-to-its-word pail layered with hash browns, cheddar, eggs, and a choice of sausage, bacon, or avocado. It’s almost worth getting hungover, if only to justify the order.”

Although the kind folks over at ExtraCrispy focused primarily on the Breakfast Pail, the novelty itself is relatively new.

“The breakfast pail started about seven years ago,” said Ed Thorndike ’89, longtime owner of WesWings and the Red & Black Café. “And that really came out of our student workers. The way it started was, our staff is always too busy, and they’re always kind of snacking in the back. They would take a small soup cup, and they would put together a little dish for themselves. They would grab a little bit of potatoes, and egg, and maybe if there’s some bacon around or whatever, and it was a little dish for them to have.”

What started as a behind-the-scenes way to stay fed on the job quickly turned into a campus sensation.

“It got to the point where everyone was always having it and everyone was always eating that, and we said, ‘That’s actually a pretty good idea,’” Thorndike said. “Then I had the idea of what if we put it in a Chinese food container and really made it a big full breakfast and everything, and we started doing it and it did fairly well, but I would say in the last couple years, it’s really taken off.”

Thorndike attributed the precipitous rise in the popularity of the Breakfast Pail to its uniqueness.

“I think it’s just the novelty of it,” he said. “I mean, in the end, the ingredients aren’t necessarily anything spectacular. Although I think you could say that with a good breakfast, we took our time to select the right kind of potatoes and try to tell people what makes more sense in terms of over-easy eggs versus scrambled depending on how you like it, but in the last two years it’s gone from 100 or 125 on a typical Saturday or Sunday, now we’re doing 250 or 300 a day.”

The sheer scale of those kind of numbers for a privately owned campus dining spot is significant at a school the size of the University.

“If you think about it, I mean, that’s 10 percent of the campus,” Thorndike said. “It’s just getting that one dish from a couple of guys who are making it in the back.”

Logistically, WesWings is not as complicated of an endeavor as one may think a private restaurant that accepts campus points would be. After being around for 25 years, WesWings negotiates a contract with the University separate from official services like Bon Appétit.

Thorndike then talked about the student workers at WesWings and why he chooses to employ them, what they learn on the job, and why their time at Swings is important.

“When we first opened a little over 25 years ago, we had no full-time employees,” he said. “My business partner Karen Polascik and I were the only full-time people. For the first two or three years, it was just us and part-time students. As we got busier, we realized that we needed more help than just graduating part-time students.”

Yet even after hiring full-time staff, Thorndike believes that having a number of student workers is key for both his restaurant and the students themselves.

“Having a healthy amount of students working is key,” Thorndike said. “One, I think it helps business. People want to go where they know people. Our workers are some of our best customers because they’re around the food and they know the food. It helps the atmosphere.”

He went on to explain what the student workers learn from their full-time coworkers.

“I think they learn a lot in this job,” he said. “But I don’t think it’s until after they’ve graduated until they realize how valuable the job really was. No, it’s not a job where it’s important to cook wings or make a sandwich—later in life they’re probably not going to be doing that—but we do a lot of references for people who are getting jobs in restaurants after graduation, but we also give out references for lots of other jobs. We give out tons. I’ve given out some for people who graduated 10 years ago.”

For former WesWings employees, a recommendation from Thorndike can be more helpful than some would think.

“Employers recognize that, yes, you were in college and you may not have the experience for the job you’re applying for, but it still was a job, and they want to know, ‘How did you interact with people?’” Thorndike said. “We had someone who graduated eight years ago and she told Karen, ‘This was the best job I ever had.’”

As student workers and customers graduate, WesWings will likely remain a staple of the University’s social fabric and culture, no matter what any food blog says.