Chef Gets Cookin’ at Reopened Psi U 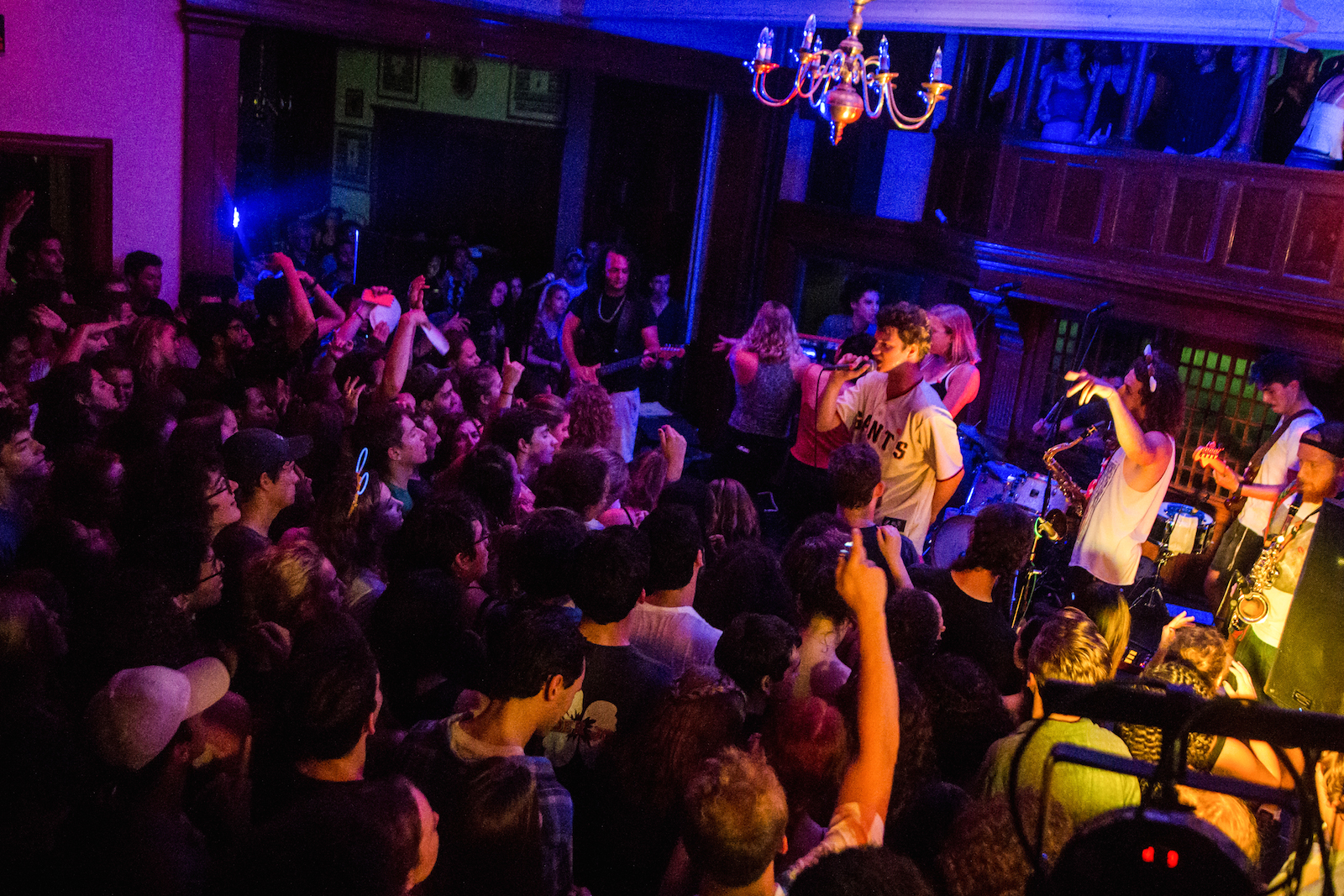 Three years after they formed in and around WestCo, the members of Chef—Wesleyan’s genre-defying, 10-piece band that sticks with something close to jazz fusion—began to get hyped for their first primetime show in months. Their hosts, however, felt increasingly anxious.

While Chef’s show at Psi Upsilon officially ended their nine-month hiatus, it was also the first show at Psi U since the house was vacated last year after its program housing status was revoked amid a drug bust in the parking lot behind the house off College Street.

With scores of members on hand to handle the event, along with University event staff and even the house manager—a stipulation resulting from the drug bust that sources close to the matter confirmed under the condition of anonymity—the concert was logistically daunting.

The crowd reached capacity before the show even began. Reinforcements were sent to the door, and back entrances were patrolled as scores of students began to pour down College Row, crowding the entrance of the oldest house on campus.

Thankfully for Chef, members of Psi U, and the greater Wesleyan community, the show went off without a hitch. Public Safety confirmed that there were no incidents stemming from the event, and event staff kept the concert at capacity. For a few hours on a balmy Saturday night, concertgoers could forget everything from the constant existential crisis of college to the draconian Office of Residential Life policies that seek to restrict shows just like this one at the University.

As for the music, Chef performed an enhanced live version of their newly released album, Ten, along with a few other songs and covers to make things interesting. Those with a set list could consult a margin of more conventional spelling for tracks such as “Wuzzgüd” (What’s Good), “For-in-zix” (Forensics), and “Eeeeeeeego” (Ego).

After senior rap duo Jack Graylin and Jonah Toussaint exited the stage to an energetic crowd, all 10 members of Chef proceeded from the back of the room banging on pots and pans—get it?—building up to a crescendo before opening with their instrumental track “Kangaroo Court.”

Featuring seniors Willie Molski and Max Luton on the alto and tenor saxophones, respectively, Adam Rochelle on keys, Anthony Dean on bass, Henry Kinder on drums, and Isaac Butler-Brown on guitar, Chef deployed a veritable arsenal of musical talent in every song. More impressive is how the band found cohesion amid a seemingly chaotic mix of instruments and sounds.

Most of Chef’s music also features a wide array of vocal talent, with Butler-Brown also providing lead or backup vocals on several tracks, along with Miles McLeod rapping, and the all-star singing triplet of seniors Lydia Elmer, Mimi Goldstein, and Annie Flom complementing each other’s voices along with the sound of the rest of the band.

In case that wasn’t enough to impress music buffs, Luton, Dean, and McLeod also play the synthesizer for certain songs, and Butler-Brown can play just about anything, from the trumpet to a skillet that would have otherwise been collecting dust in Psi U’s kitchen.

A band like this does not create music in a vacuum. For Chef, musical influences come from everywhere, including from each other.

“I like D’Angelo, Snarky Puppy, Hiatus Kaiyote, and Anderson Paak for sure,” Kinder said.

Although the band has no front person despite their array of standout performers—from Butler-Brown’s versatility to the commanding presence of Elmer, Goldstein, and Flom—the band is rather Kinder-centric at times. One example in their social media presence is the so-called “Kinder Cam,” where members not playing during a song will take a video of Henry Kinder’s face while he plays, slowly and awkwardly zooming in on his concentrated face.

“We love to watch Henry do his thing and drum,” Flom said. “He gets really into it and makes a lot of faces. So it just started in rehearsal one day: I was taking a video snap of him just zooming in.”

“It’s disarming,” Kinder said. “I never know what to think about it.”

Kinder kept the beat going while glistening shirtless under the lights at Psi U halfway through the set as the crowd began to sing along to songs they just learned. Butler-Brown shined in several guitar solos, while on the opposite side of the stage, Molski and Luton threw the vibe back to the ’70s with their own riffs on the sax. Dean made the room even funkier with a whirling display on the bass that kept the lengthy set list churning along without a worry.

Front and center, McLeod’s rapping paired with vocals by Elmer, Goldstein, and Flom captivated onlookers, who could be seen with their jaws dropped at times from the box above the stage. Chef’s singing trio and rapper explained how their vocals fit into the band’s gargantuan sound.

“We actually have quite different voice types,” Goldstein said.

Elmer agreed with her bandmate.

“We generally split low, medium, high, because of the way our voices are,” she said. “I would say my favorite is when we’re all singing together rather than when we’re singing separately.”

“I think that’s a big part of our sound too as a band,” Flom said. “As a band, we have a very big sound, and I think a huge part of that is having a three-part harmony vocally rather than just one lead vocalist.”

For McLeod, rap is also a crucial part of Chef.

“I take pride in my lyricism and my vocabulary, and I really respect the art,” he said. “I feel like anyone who can respect the art of it can find a place in whatever ensemble they’re working in.”

Along with Rochelle, Luton, Dean, and Butler-Brown, McLeod is working on a senior thesis for the Music Department outside of his duties with Chef.

Although most concertgoers would say something along the lines of how Chef “killed it” at Psi U, they really engaged in an act of creation. With an album now out on Bandcamp and imminently streaming on Spotify and iTunes, Chef could see an ascendance to fame outside of Middletown should their album fall before the right set of ears. Cutting their teeth in WestCo and Psi U, Chef may need a bigger kitchen after Saturday’s show.