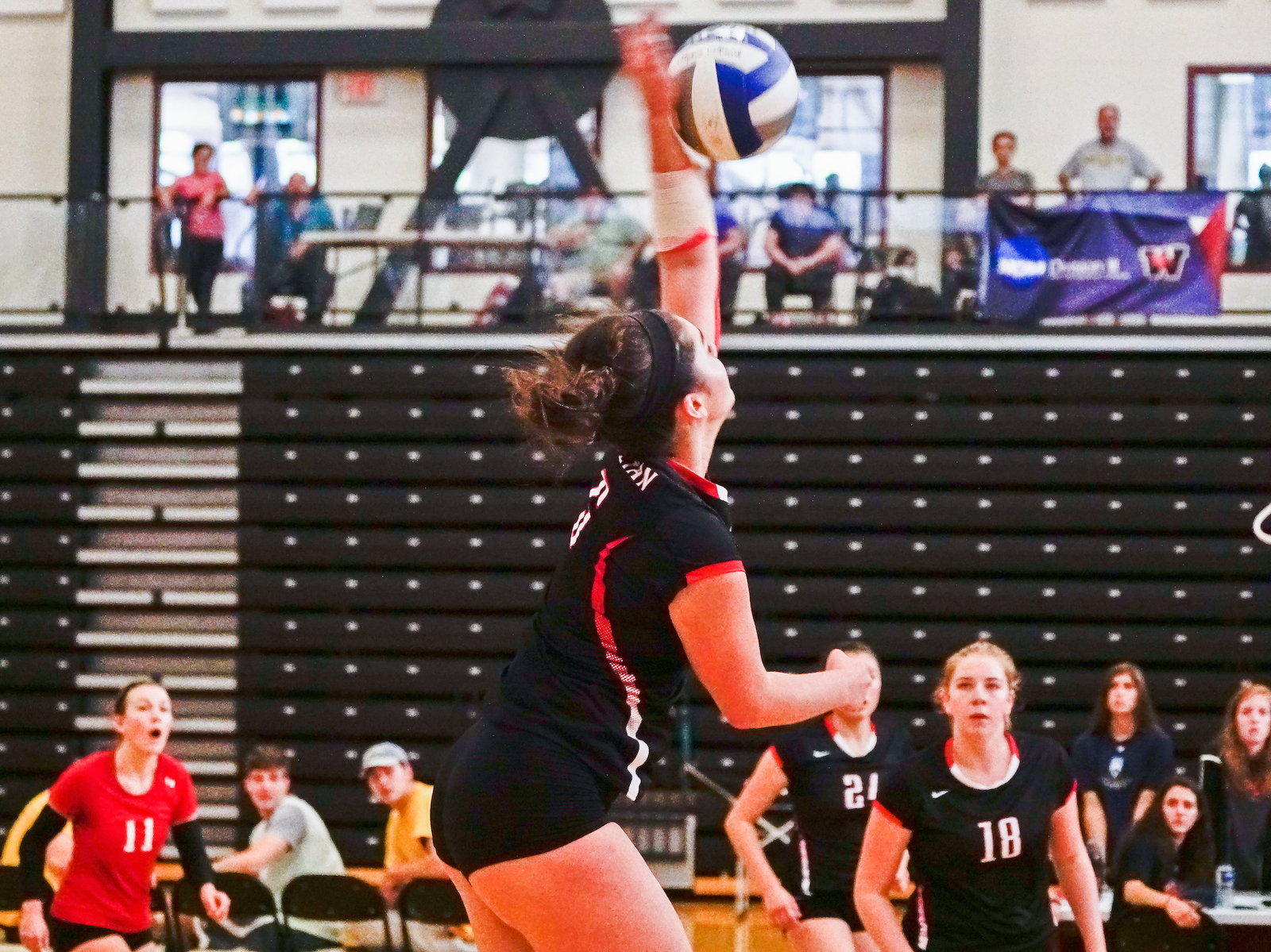 Chanting Wesleyan students filled the stands at Silloway Stadium on Friday, Sept. 9 for volleyball’s opener against Worcester State University. The Cards easily dispatched the Lancers in three sets to start their season on a strong note. The next day, Wes fell to Western Connecticut State University in a tight match, but rebounded with an easy win over Mitchell College later in the afternoon.

In a reflection of Coach Ben Somera’s strong offseason recruiting this past year, three first-years started for the Cards: Olivia Guidotti ’20, Gabby Bennett ’20, and Mia Hogan ’20. Other starters were Rachel Savage ’17, Madeleine Lundberg ’19, and Kelsey Tam ’19.

Wesleyan came out with an aggressive play style but could not maintain consistency. Various unforced errors gave Worcester an early lead. In response, Somera wasted no time in subbing in another rookie, Nicole Hilton ’20. Hilton has a powerful offensive skill set that put the Worcester defense back on their heels. Bennett entered soon after, also proving a versatile offensive player and a strong blocker at net.

After an uneven start in the first set, the young team found its footing on offense. A booming spike by Sarah Swenson ’18 tied the score at 18-18, but Worcester quickly went up another three points.

The Cards responded with a barrage of kills to even out the score at 25 all. With clever offense and a solid defense, Wes managed to pull the set out 27-25.

The Cards carried this momentum into the second set, going up 12-2 against the Lancers. This early part of the set was the first time the team really seemed to connect as a unit.

However, the tide turned once again and Worcester resurged to make the score 23-22 with the Cards leading by one. Somera scrambled for a timeout to stop the opponent’s momentum. Superb defensive dives by Savage allowed Wesleyan to pull out the set, 25-22.

Hilton slammed a massive spike and followed with a service ace to set the tone for the third set. Savage continued her diving spectacles to give her team’s offensive powerhouses, such as Bennett and Swenson, the opportunities for killer spikes that led Wesleyan to an easy 25-13 win in the final set.

This year’s shut-out of Worcester marked an improvement over last year’s performance against the team, when the Cards dropped one set.

On Saturday, Sept. 10, the team played a doubleheader against Western Connecticut State at 11 a.m. and then against Mitchell College at 1:35 p.m.

Against Western Connecticut State, the Cards continued the volatile play of the first match. The team dropped the first two sets 25-20 and 25-18, but through strong defense it rallied to win the next two sets 25-13 and 26-24, respectively. The team came up just short in the fifth set, however, losing 15-8 to a sturdy Warriors squad. This loss is the team’s second year in a row falling to Western Connecticut in five sets.

Despite the tough loss, players on the Cards were excited by their defensive game.

“We have a really strong defense,” Emma Robin ’19 said.  “We have been working really hard on that and I think that we have been doing well with that.”

“Rachel [Savage] did a really good job of digging their strong outside attacks on defense,” Hilton said.

This aggressive brand of defense stressed by Robin is key, because it gives Wesleyan’s offensive the opportunity to get kills and gain confidence.

The second match of the day went much better for the team. Wesleyan rolled over Mitchell College in straight sets, 25-8, 25-9, 25-7. The Mariners had no answer for the Cards’ opportunistic offense and staunch defense.

Ultimately, the team had a shaky but positive start to the season this weekend. The Cards’ potential revealed itself in spurts of excellence, such as early in the second set against Worcester University. But they must avoid the cold streaks, which often dropped them in hot water.

Somera’s goal of a well-rounded team appears to be progressing, as the team’s young offensive talent complimented the experienced defense of Savage and others.

Pressure, such as the fifth set against Western Connecticut State, gave the Cards some trouble and appeared to influence the team’s composure. Hopefully, this problem will subside as the younger players ease into their positions. If the Cards are able to keep a functioning dynamic under the pressure of the game, and take advantage of the serious promise of their net players, they could very well emerge as a top-tier program in the NESCAC and Little Three.