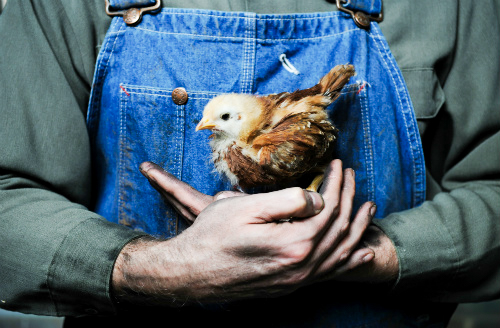 Assistant Director Rachel Sobelsohn ’17 posted on behalf of Director Kim Weild, a Wesleyan Theater Department Professor and Founding Artistic Director of Our Voices, a multicultural theater group. I took my seat for the New Ohio’s Ice Factory, a New-York-City-based festival for cutting edge new works, with little to no expectations for Weild’s brilliant interpretations of the experimental and American-Sign-Language-translated Charles Mee script titled “soot and spit” set before us.

The Our Voices Project, a one-act musical and work-in-progress, offered a glimpse into the inspiration and drive of one of America’s most famous outsider artists of the 20th century. Artist James Castle, born profoundly deaf and thought to have suffered from a learning disability (though this is still debated), was unable to sign, write, read, or speak, though he created an estimated 20,000 drawings over the course of his lifetime. Weild delivered an assumed underlying desire to communicate thoughts and emotions on Castle’s behalf through the personification of his artwork by the Our Voices cast, which occurs in the second half of the piece.

Weild’s design team included sets by Mathew Imhoff, who notably worked on West Side Story at Carnegie Hall, costumes by Haley Peterson, media design by Boyd Branch, lighting by Broadway veteran Paul Miller, and music direction by Douglas Waterbury-Tieman, who most recently was seen in the off-Broadway musical “The Robber Bridegroom.” With a set made entirely of paper, the action stayed consistent in the Castle family’s icehouse (circa early to mid 1900s), which was also Castle’s studio. The main action occurs around Castle’s desk station, accompanied by a series of constantly shifting projections, appearing on several vertical makeshift walls cut with windows that stand in the form of a fragmented house. Mee’s script, threaded with John Hartford folk songs and monologues in English and on several occasions accompanied by ASL translations, delivers an innovative blend of genres and media that left me teary-eyed and wondering out loud as the lights came up at the end: “That was only a work-in-progress?”

After witnessing such an experimental yet accessible piece of theater in terms of broader audience capabilities, I needed to know more. I had the pleasure of sitting down with Weild and Sobelsohn the following week to discuss project specifics.

Weild, a storied director and choreographer, opened up and shared personal connections to the piece and its subject matter.

“I have a profoundly deaf brother,” Weild said. “For the first several years of his life until he was about five years old, he communicated through drawings.”

Weild also discussed how and why she chose Sobelsohn to assist her.

“Part of how I work is I watch who shows up,” Weild said. “I’m interested in working with people who not only want to be there, but have a need to be there. I know the kind of work Rachel’s interested in…and I was prepared to give it a go….She’s been the best [Assistant Director] I’ve ever had.”

Sobelsohn, who plans to author a playwriting thesis at the University that incorporates disability and able-bodied actors playing roles reflective of ability, shared both her appraisals and aspirations in theater.

“There’s an issue in theater where a lot of roles…are created…[in which] the characters with disabilities are played by able-bodied actors and as a playwright I feel that it’s my responsibility to change that,” Sobelsohn said. “[Charles Mee] does that in an amazing way, and I was really inspired by how firm he stands to that.”

Mee, known for writing the popular play “Big Love,” has been working closely with Weild on this show. They have collaborated on a number of others in the past including “Fêtes de la Nuit,” a culturally prevalent romantic piece set in Paris that earned Weild a Drama Desk nomination.

“One of the things about [Charles Mee’s] work [is that] even with pieces with a lot of text, his writing is theatrical,” Weild said. “It’s heightened. It’s visual, and he demands that a director, the actors, and the audience be co-authors with him.”

After asking both Weild and Sobelsohn to share stories of their most hectic tech weeks in memory, they both laughed and immediately agreed that the Our Voices Project was by far the most stressful.

“I think we teched the show in less than 16 hours,” Weild chuckled. “And that’s a big show to tech. Then again, we had no choice given the constraints of the festival. But that’s about being prepared and…[my creative team] was just so on top of it….A couple of the actors remarked that they couldn’t understand how I could be so calm. Truth is, they didn’t know what was going on on the inside.”

Weild discussed her creative intentions in developing the show.

“As a theater artist, you need to find ways that you are able to experiment and try things out of the glare of critics,” Weild said. “And it’s tough with theater because not only do you need other people in order to make it, you need an audience to complete it….I’m aware that this is a piece that people are either going to love or hate because it’s so different….We’re asking the audience to let go of potentially what they think theater is supposed to be, to let go of straight narrative, to allow and receive something disorienting, to give in to what you’re seeing and hearing and feeling.”

Kori Rushton, Producing Artistic Director of the IRT, an independent theater group that works with artists in development of new works, offered her thoughts on the Our Voices Project.

“Kim is pushing the boundaries of what it means to create accessible non-linear theater,” Rushton wrote in an email to The Argus. “It’s thrilling, disorienting, beautiful and transcendent. In that way she’s giving us the opportunity to gain an understanding of what Castle might have been experiencing as someone who was born profoundly deaf, possibly autistic and was an outsider….[Weild is] actively investigating what it means to bridge deaf and hearing worlds, to make theater that is fully accessible….James Castle needed to make art, it was his way of making sense out of the world around him….In addition, the kind of love Castle received from his family, makes the impossible possible.”

In 2015, Weild was awarded the Archival Residency from Greenwich Village’s IRT and the New Ohio Theatre, which allows her to develop a piece over the course of nearly two years. With one month of practice space available on a yearly basis at IRT’s studio for project development, Weild has been able to investigate and work out the kinks with Mee as they enter the home stretch with hopes of hosting a monthlong run of the piece in May or June of 2017. Weild and Mee, however, still have their fair share of revisions and additions ahead.

“There’s a whole other layer to this piece that wasn’t in the show,” Weild said. “There are four to six performers with Down syndrome…and they’ll be added in February. There’s more writing that Chuck and I are talking about adding as well. There’s also a live band, so we’re deciding whether it’s a three- or five-piece band. There’s a lot of moving parts.”

The show will begin rehearsing for the planned May run starting in April. But they don’t plan to end the production there.

“Our eye is on…the BAM [Brooklyn Academy of Music] Fisher,” Weild said. “Because [it was] Dick Fisher, who was Chuck’s patron…and had shown Chuck a Castle drawing and then told Chuck a little bit about James Castle. It feels right that the piece should ultimately be done at the BAM Fisher or at Bard Fisher. In a certain way, it feels like a coming home.”

After speaking with these two members of the University community who offered their time and dedication to a cause that inspires them, I had to ask if they had any advice for the class of 2020.

“Freshman year, I was really hesitant to join the theater world,” Sobelsohn said. “The way that I started was by putting my plays up through Anystage, which is the Second Stage program for student playwrights, and that’s been amazing. They are so supportive, and it’s really wonderful to see a reading or a staged reading…with your work in a semester.”

“Follow your interests,” she said. “It’s very cliché-sounding, but the next four years are unlike any four years ever in your life, and I think in some ways you don’t fully…understand that until years after you’ve graduated from college, but it’s an opportunity to follow your interests, forge relationships….Seek out those who are different from you. Engage in dialogue.”