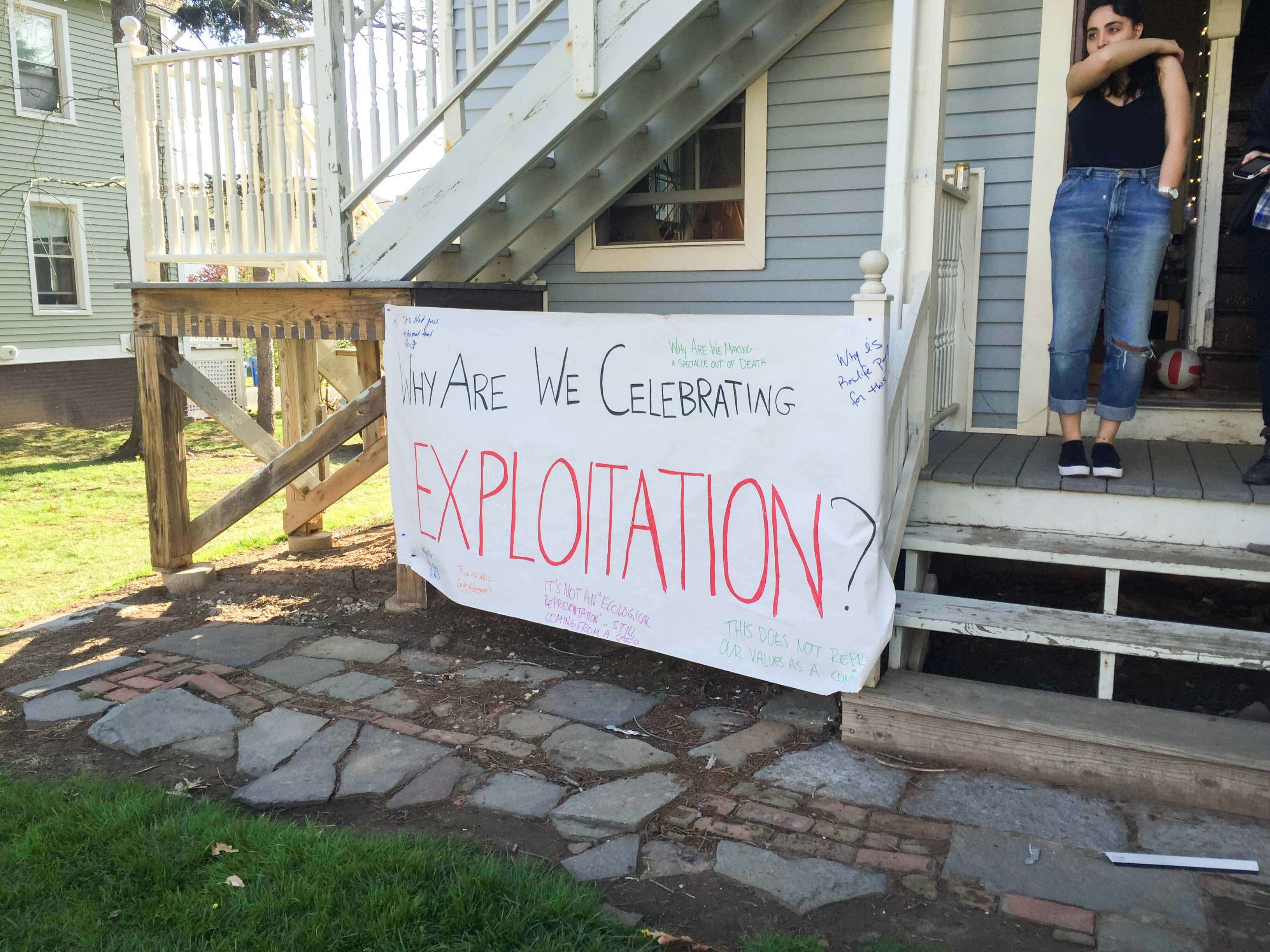 On Sunday, April 24, students protested a school-sponsored barbecue in which a whole pig was roasted in the Fountain Ave. backyards. Red Wolf Dining, a student-run restaurant spearheaded by Wolfgang Jorde ’16 and Abby Gruppuso ’16, partnered with senior CAs to hold the event for seniors. The protest, organized in part by members of PHARAL Wes, an animal rights student group, aimed to educate event-goers about the meat industry and call into question the use of student funds to pay for the barbecue.

“I know that many of you have contacted the organizers of the event, urging its cancellation, but this insensitive celebration of death will still take place,” a student wrote in an email to the members of PHARAL Wes on Saturday. “So tomorrow…we will be peacefully protesting the event, holding signs, and standing in solidarity with one another, and with the voiceless animals oppressed by animal agriculture.”

The event was first advertised via email on April 20, in which it was called “The Great Pig Roast.” However, on April 24, in another email sent to advertise the event, it had been renamed “Spring Picnic on Fountain.”

The protestors emphasized that they were not protesting the barbecue itself, but more specifically the choice of roasting a pig in the senior backyards.

“We view it as a celebration of the exploitation of the animal that was involved, the people that were involved, [such as those] in factory farms, or the environment,” Brooke Burns ’18 said.

Similarly, they were protesting the fact that the rights of the animal had not been considered when planning an event for the senior class. A student spoke to the difference between society’s treatment of farm animals and domesticated animals.

“[We wanted to] address the fact that this animal whose death is being celebrated was a living being with desires and feelings and…was completely sentient, and that did not want to die,” he said. “[We wanted to] potentially try to point out the cognitive dissonance that many people have in their relations to animals where they love the cats and dogs in their homes but are willing to consume a different species that has been exposed to wanton suffering for all its life and then slaughtered.”

The protest also occurred around other issues regarding the planning of the event itself. Some students said that it did not represent community values, especially in the initial naming of the event.

“We don’t think it’s reflective of our community values to be using our community funds to fund an event like this,” Rebecca Winkler ’16 said. “Specifically the rhetoric about the event: it was called the ‘Great Pig Roast,’ [and] in the event description, [they] wrote about coming by throughout the day to watch the pig roast. It really trivialized what went into the pig dying and being transported here from Iowa, and being killed when it was five months old, just to be made into a giant spectacle for all of us to enjoy.”

Another issue around the organization of the event was that it excluded a large part of the community.

“This event does exclude people who don’t want to be involved either for religious reasons or for dietary reasons…this is not inclusive of everybody,” Cassia Patel ’17 said.

The protest brought up the issue of how public spaces are used at the University. Patel cited that Earth Fest, a celebration of the Earth and its conservation, was not allowed to be held in the Fountain backyards because it would not interest everyone. She said that this was hypocritical.

Winkler, who lives on Fountain, also noted that seniors were not given enough notice to the event to provide input. The event was announced only a few days before it occurred, and there was no poll given to Fountain residents. Because the pig roast happened in her backyard, she felt that she was forced to engage in the event despite her reservations.

“As a neighbor [to the event], [I’ve] had, throughout the day, to see this pig roasting,” Winkler said. “There was no inquiry to the residents of the houses in this specific area, whether they wanted it to happen or their opinions at all in the planning process.”

The protestors also questioned the role of Residential Life and SALD in endorsing the event, as it was paid for by these two University entities.

“Doing this with the endorsement of ResLife and SALD, this is not representative of our community values in any way, and that’s just not appropriate,” Patel said.

The protestors held up a sign and also held a speak-out, stating the reasons why they objected to the event. This included encouraging everyone in attendance to ask questions.

“We’ve hung up the sign, and it’s just more of a way…to pose questions to the community who are participating in the pig roast,” Burns said. “Why exactly are we celebrating this form of exploitation?”

Jorde and Gruppuso organized the event because they believed it would be a good way to bring seniors together to spend time outside and enjoy food in the Fountain backyards. As chefs, they also wanted to push their cooking skills even further than the dinners that they run every week.

“Our intent was not to upset anyone or celebrate death, but only to try and challenge ourselves and get seniors to congregate in the good weather to relax on a Sunday,” Jorde and Gruppuso wrote in an email to The Argus. “We provided vegetarian, vegan, and gluten-free options to try to be as inclusive as possible in regards to senior dietary choices and restrictions.”

Their statement includes the fact that they understand the frustrations of the protestors.

“We did not think about how the image of the roasting pig could be disturbing to some and apologize to those who felt uncomfortable,” Jorde and Gruppuso wrote. “We respect the protesters’ decision not to associate themselves with an event they do not morally agree with.”

Jorde and Gruppuso added that they were thankful for the feedback and to all those who participated in the event.

“Despite the controversy surrounding the event, we are extremely appreciative to all of the seniors who attended the event and supported our culinary passion,” Jorde and Gruppuso wrote.