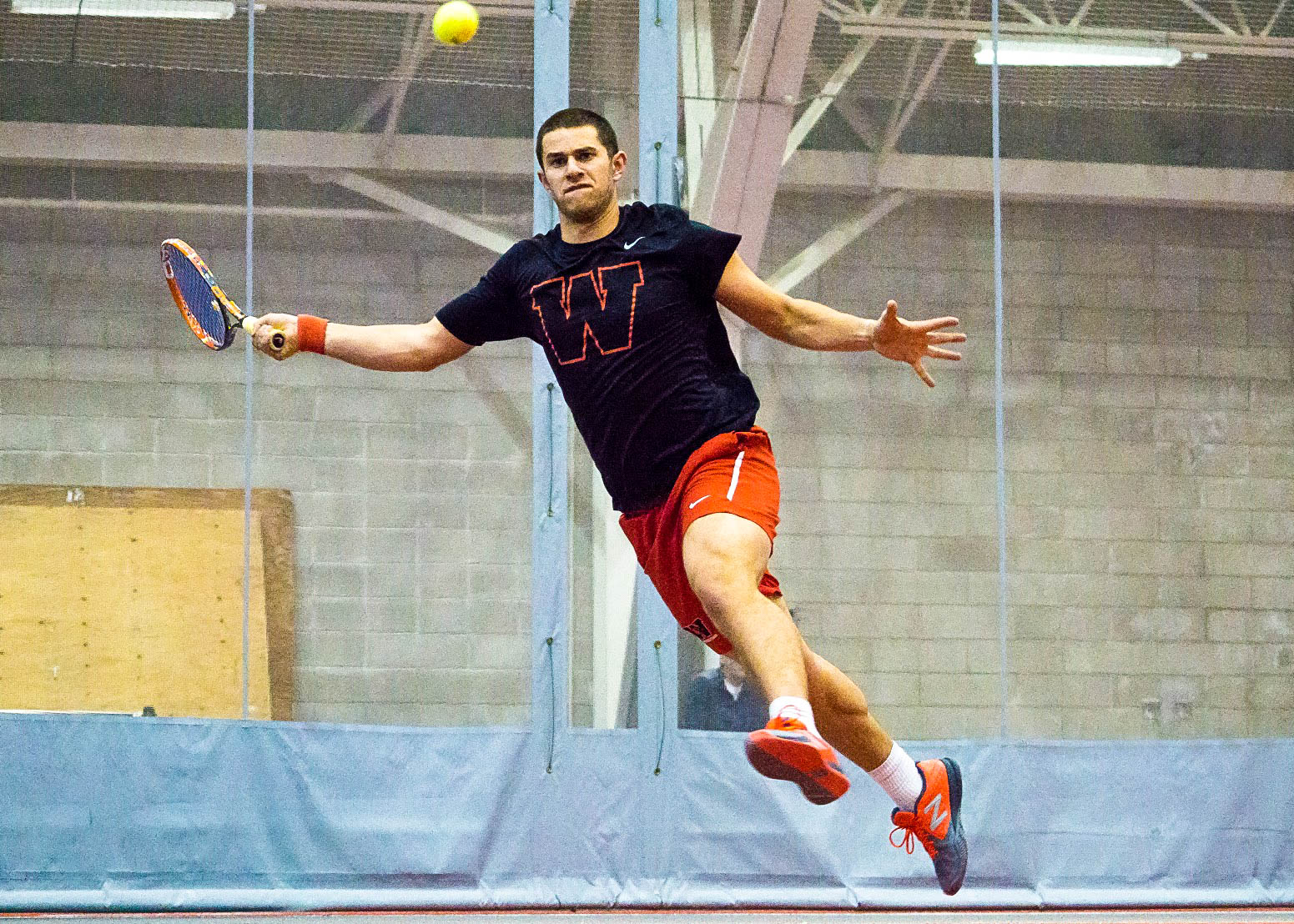 The men’s tennis team had an emotional and physical roller coaster of a match on Sunday, April 3. The Cardinals faced off against the number two team in the nation, the Bowdoin Polar Bears. After both teams had a very successful spring break campaign, the match was geared up to be one for the ages. The Polar Bears had a perfect spring break trip, with their biggest win coming against the reigning national champion, Claremont-Mudd-Scripps, in a 7-2 upset. The Cardinals racked up a few big wins of their own during their trip to California, including a win against the number five team in the nation, Trinity (TX), 6-2.

With a home court advantage, the Cards started off with a 2-1 lead after doubles play. The duo of Zacko Brint ’16 and Greg Lyon ’17 edged Luke Trinka and Luke Tercek, 9-8 at the top position. It was a battle of the fittest and most clutch. Brint and Lyon were not only down multiple breaks at one point in the match, but also trailing 7-6 with Bowdoin serving for the match. Brint and Lyon came back in blistering fashion, with multiple diving shots and volley kills. With nerves of steel, the duo was able to finish off their competitors, 9-8. A Brint scream heard all throughout Bacon Field House signaled the second Cardinal win of the afternoon.

“I thought that I served great and our returns got better and more confident throughout the match,” Lyon said. “Zacko did a great job at net of putting balls away and just being a great presence in general. As it went on we just got more and more confident.”

His doubles partner and captain of the team, Brint, had different ideas on the result of the match.

“I give the credit to Mr. Lyon,” Brint said. “He looked at me and said, ‘we have to get to a higher level.’ He told me to get my energy up and to rip the ball, and I did. This goes back to the question of understanding the level at which we can play. At a certain point, we had enough momentum and belief that executing was easy.”

“I think that the way that we competed in doubles was extremely promising,” Liu said. “Doubles used to be our major weakness, but I feel like we’re starting to see our work pay off. The team’s strength in doubles has been made very apparent in light of this result as well as their 2-1 doubles win against Middlebury two weeks ago. Looking to the future, this asset should serve them well, especially in matches against highly-ranked opposition.”

The singles matches, sadly, edged in the favor of Bowdoin. The Cards were, however, able to pick up a couple of big wins from the number two and four positions. Chen at the number two position won a nail-biting three-set match. After losing the first set closely at 6-4, the sophomore responded with wins of 6-2 and 6-3 to secure the match. This was Chen’s 5th win of the season and 15th in his two-year career. In addition to winning the first doubles match of the day, Samson claimed a definitive sweep at the fourth singles position. He beat Yangeng Jiang, 6-3, 6-4 with ease. The first-year has proved to be a rock at the number four position, making it very hard for opponents to keep up with his hard hitting style.

After this grueling and close loss, the team can only be proud of how they played and fought against the second highest ranked team in the nation. Brint took away only positives from the match.

“Our team can better grasp our true potential,” he said. “My teammates are exceptional tennis players and as a team we have started to recognize that we can compete with and beat the top teams in the country. We are a top team in the country. I’m so proud of the advances that our team has made in the past four years.”

The Cardinals have another in-conference match this coming weekend. They host the No. 17 ranked team in the nation, Tufts, at 1 p.m. in Bacon Field House. Once again, the match promises to be very close and competitive. The team looks to continue their impressive spring campaign with a NESCAC win.