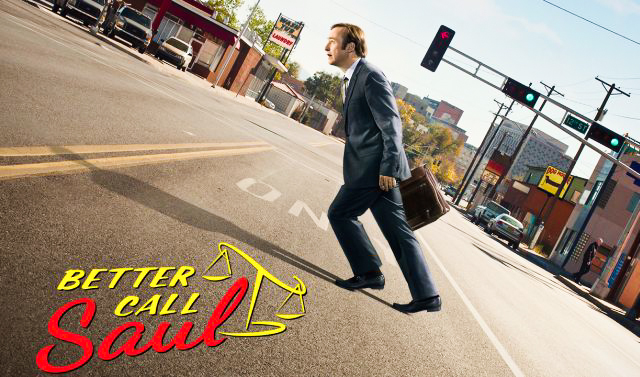 Sharing the same color coordination aesthetic and symbolism as “Breaking Bad,” Vince Gilligan’s “Better Call Saul” is back for a second season, and things are starting to get interesting. That’s not to say that the show was boring before. In fact, shockingly enough, the show has managed to flourish autonomously despite being a spinoff to one of the most successful shows of all time, “Breaking Bad.”

However, neither Season 1 of “Better Call Saul,” nor the six episodes so far featured in Season 2, feature anyone named Saul, save for a few brief film noir glimpses of “Breaking Bad’s” sleazy lawyer. After the show’s conclusion, he works in exile as the manager of a Cinnabon in a cavernous mall in Nebraska.

Everything that’s in color in “Better Call Saul” takes place before “Breaking Bad.” For those unfamiliar with “Breaking Bad,” there is really nothing you need to know about it to enjoy the spinoff, other than the fact that its main character, Saul Goodman, is the lawyer that the protagonist of “Breaking Bad” hires after seeing a hammy ad on TV that ends with the flashy tagline “Better Call Saul!” Goodman is played brilliantly enough for a spinoff by “Saturday Night Live” alumnus Bob Odenkirk.

It doesn’t take a genius to guess that Saul Goodman, a cheap homophone for the saying “It’s all good, man,” is not in fact this lawyer’s real name. This is affirmed right off the bat in the prequel’s first season, which takes place about a decade prior to the imminent modern chaos of “Breaking Bad.” Here, our hero is named James “Jimmy” McGill, and at this point, he has not yet decided to break bad.

Surrounding Jimmy and his sleazy showmanship are Kim Wexler, played by the standout yet lesser-known actress Rhea Seehorn, and Chuck McGill (Michael McKean), who is a partner at the law firm Hamlin, Hamlin & McGill. Jimmy despises the law firm and, by Season 2, is barely on speaking terms with his brother, who he once cared for in illness. Chuck suffers from Electromagnetic Hypersensitivity Syndrome (EHS), which prevents him from going to the office and forces him to wear a tinfoil blanket in his electricity and cell phone-free home, a place he almost never leaves until Season 2. As for Kim, she and Jimmy now share an on-again-off-again romance that seems to flourish and then collapse every other episode. In a way, Kim has become the moral center of the show in her resistance to Jimmy’s rather fluid interpretation of the rules set forth by the New Mexico Bar Association, coupled with her attraction to his free spirit.

Season 2 also features the surprising darling of “Breaking Bad,” Mike Ehrmantraut (Jonathan Banks), who is trying to care for his daughter and granddaughter as a parking lot attendant by day and hit man by night after leaving his job as a police officer in Philadelphia. Tuco Salamanca (Raymond Cruz) and his iconic grandfather Tio Salamanca (Mark Margolis) reappear in Season 2 as powerful and dangerous cartel members who have just begun to envelop Mr. Ehrmantraut in their devious schemes, which not yet reach “Breaking Bad” levels of terror.

Season 2 takes an interesting turn when Jimmy, by the grace of Kim Wexler, gets an upgrade from his private practice in the back of a nail salon to a fourth year associate gig at the prestigious firm Davis & Main. There, the law partners admire Jimmy’s freelance work on a class action lawsuit against one of the biggest retirement home chains in the South West United States. This move befuddled many loyal fans of Gilligan, who were used to “Breaking Bad’s” tendency to plunge its characters into a Dante’s Inferno-esque descent into evil. However, just last week, the first hints of the Saul Goodman persona were revealed in Jimmy’s colorful wardrobe change, a step in his methodical effort to get fired from Davis & Main without losing his hefty signing bonus.

Meanwhile, Kim has become more than displeased with Hamlin, Hamlin & McGill due to poor and even sexist treatment from her boss, Howard Hamlin (Patrick Fabian). Although she’s received a partner track offer from another firm, Kim may break bad by joining Jimmy in a private practice. Given these two turns of character, combined with Mike begrudgingly coming into contact with the cartel, it appears as if the three main characters of “Better Call Saul” are ready to begin their regression into the cesspool of sin that the show’s predecessor cherished so dearly.

Rhea Seehorn’s portrayal of Kim Wexler has been the standout of the show so far, which is quite significant given the masterful cinematographic language and consistent performances that surround her in Jonathan Banks and Bob Odenkirk. Nonetheless, Seehorn steals each week with her strut along the moral trapeze that Jimmy has left in his wake. She commands each scene, either with her assertion of her legal expertise or in her vulnerability upon finding herself in a tight-knit hierarchy at Hamlin, Hamlin & McGill that prevents her from succeeding. Her relationship with Jimmy exists on her own terms, and she is perhaps the character who succeeds most in calling Jimmy out and peering through his façade of showmanship.

“Better Call Saul” may not have the ratings or critical acclaim of “Breaking Bad,” and it most certainly lacks the pandemonium of its predecessor, but it is still an effective show that is managing to succeed on its own terms. Its vivid color scheme, gorgeous Southwestern landscapes, and intimate character portrayals make it one of the best shows on television and a valuable second act in Vince Gilligan’s oeuvre. So before you settle for Netflix’s latest data driven show custom tailored to your viewing history, or one of the major network’s kitsch clones, tune into AMC on Monday nights for “Better Call Saul” and let yourself descend into moral ambiguity and subsequent decay with Mr. Goodman.