From Chef to Grad Student: Merton Champagne Is Why 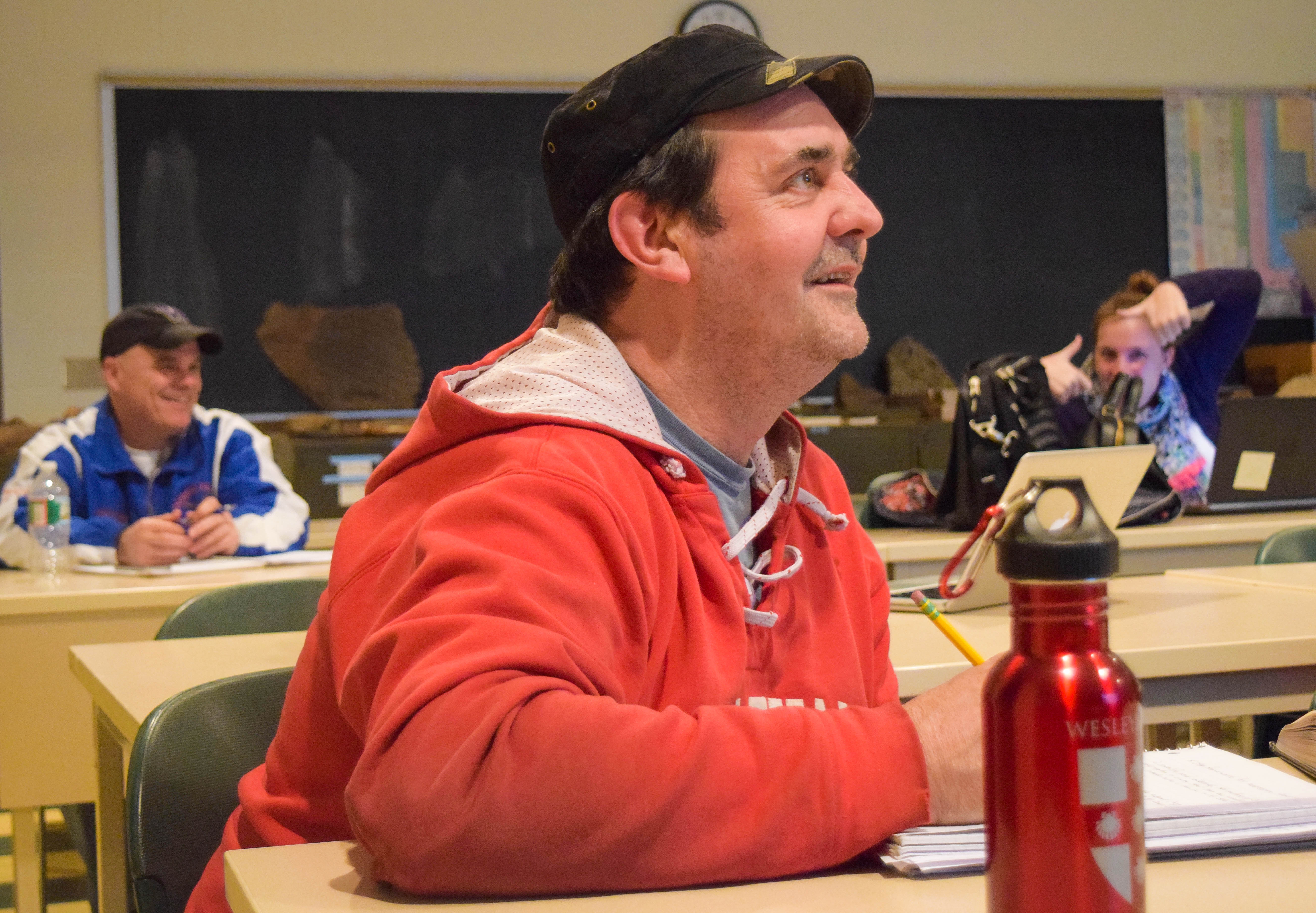 Merton Champagne’s versatility makes him one of the most interesting members of the Wesleyan community. Known to most students as the gregarious man in white making pizzas in Usdan, Champagne also studies as a graduate student in the University’s Graduate Liberal Studies (GLS) program, where he takes classes at night. Over the weekend, he can be found serving as the Sacristan at St. Timothy’s in West Hartford, where Champagne resides with his girlfriend Wendy, who works at Weshop. When he’s not making pizzas for nearly 3,000 students, hitting the books, or preparing mass, Champagne likes to mountain bike in his spare time—that is, if he has time to spare.

“[My average day is] pretty full,” Champagne said. “I’m [at Usdan] until two, I go home, and I’m usually, you know, I’m usually in the books between 3 and 9 or 10 at night. It’s not constantly, but I love school. This semester I’m taking forensic anthropology. I’m in the social science program, because I got a B.A. in public history from Central [Connecticut University], and they don’t have a public history course per se here, but I’m taking courses that would fall under it.”

Champagne’s academic trajectory is remarkable in that he has earned his GED, B.A., and now his Master’s degree all while working full time at the University, where he has been employed for 20 years. This trajectory was by no means easy for Champagne. In fact, he has overcome adversity at each turn in his life, including with his own union while taking graduate level courses at the University.

“When I graduated from [Central Connecticut], I decided that I wanted to do more,” Champagne said. “I decided I would take one class here, and see if I liked it, and I talked to Sara-Jane [Ripa], she explained to me the things that had to get done, and I would’ve been probably two classes further in my studies, but my union was fighting me, because, I guess there’s a clause in our contract that we can only hire x amount of student workers. After 20 years, I was a student worker. I put it off on hold, and I said, ‘You know what, if I have to get a lawyer, I will,’ because this is what I wanted to do. But, that has since been dropped, and I’ve just been taking courses and I just love it.”

Another example of Champagne’s resilience was when he began to battle alcoholism as a young man.

“When I was 16, I started drinking, and I quit school,” Champagne said. “I’ve been sober now for 23 years, and when I quit drinking, the first thing I did was [go] back to high school. The guidance counselor said I should probably go get my GED because I was short so many credits, and I opted to go to school at night for four years so I can graduate properly. And then I went to Central, and I graduated there, and I said, ‘You know, it just feels like I gotta finish,’ because this is something I should have done in my youth, and I just gotta finish. And I [have loved] school ever since, because since I quit and went back as an adult, I really love it so much. I can’t get enough of it.”

In his professional role at the University, Champagne carries with him two decades of institutional history. Starting out in the Summerfields dining hall and then later switching to Usdan, Champagne has moved from line cook, to line server, to his current role as Wesleyan’s renowned pizza chef. When asked about any previous experience he had with making pizza, Champagne revealed his sense of humor that has made him so beloved within the Wesleyan community.

“Just eating,” Champagne quipped. “That was it, man!”

The conversation then moved to how the University has changed culturally since Champagne began working here in 1996.

“I think it’s gotten more outspoken,” Champagne said. “I love the student body here. I mean, I feel like we’re all family for four years, you know, and I care so much for them. It’s really hard when the students are on break. It really is, it really is. I’m here in the summer for when the camps come in, but after a while I’m ready for the older kids to come back.”

When asked to clarify what he meant by outspoken, Champagne elaborated.

“Not outspoken, but more open,” Champagne clarified. “It’s easier to approach the students. When I first started here there was a different clique, and there were different cliques amongst them, and it was kinda hard to get into them. They were not so much inviting in if you were an outsider.”

Champagne was referring to members of the College of Letters, whose classes were based in the Butterfield colleges at the time before moving to 41 Wyllys, soon to be called Boger Hall, in 2012.

“Granted, when I was at Summerfields I was in the kitchen, so maybe being out front helps, I don’t know,” Champagne said.

However, once Champagne broke through and began to establish connections with members of the University community, he was ecstatic.

“I freaking loved it, man,” Champagne said. “It’s like, I can’t get enough of it. It’s like wow, I’m actually a part of the community. And that’s all I ever wanted to be.”