Not Just Comical: Club Gets Serious With Design

On a Friday evening, six students sat at a roundtable, each staring at a blank piece of paper with a pen in one hand. Malcolm Phillips ’19, seated at the head of the table, had a timer set up on his phone. He pressed “start.” Everyone in the room had four minutes to draw a picture—of anything. 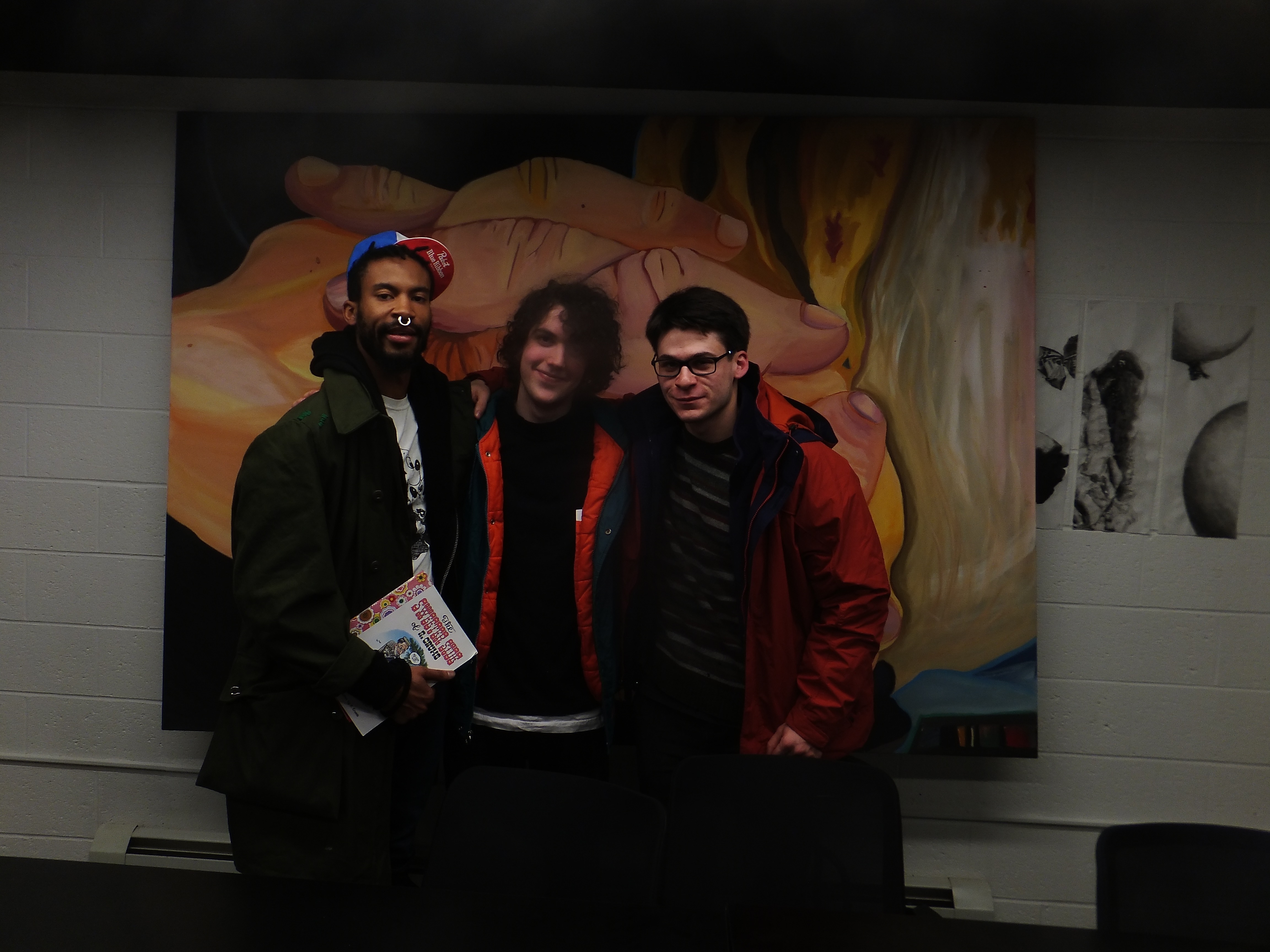 As their pens struck the paper, they each looked serious and attentive. To me, it looked like they were hard at work. To them, it probably felt like play.

The six were there for the second meeting of the Wesleyan Comix and Graphix Club, a new student organization that is intended, according to its co-founders, Phillips, Ezra Scott-Henning ’18, Aryeh Lieber ’18, and Lucia Hernandez ’19, to create a comics community within the University.

“We felt like there were people who were interested in [comics,]” Lieber said. “But there hadn’t been a big enough community.…There are a lot of people who like comics, but they were all kind of on their own.”

The group intends to change that by bringing together people who like comics,

“[We want] to create a community,” Scott-Henning said. “A space where people who care about it can just come. Even if they’re not artists, they can come and just talk about it.”

When I visited the group, the six members spent the whole time drawing comics. They began with the timed drawing—what Phillips called the “Eight Minute Drawing Challenge”—where each student draws a picture six times: first, for four minutes; then, two minutes; then, one minute; then, 30 seconds; then, 15 seconds; and finally, 5 seconds. (The exercise doesn’t quite take up the whole eight minutes, but I guess the name “Seven Minute, 50 Second Challenge” doesn’t have quite the same ring to it.) Then, they drew a collaborative comic, each drawing one panel.

The co-founders brought about five comic books to the room. One of the participants, Emma Davis ’17, even returned a book she had borrowed from Phillips. The two talked about the book, while the others drew.

The fact that everyone at this meeting was drawing comics may have had to do with the people who came to this meeting. According to Scott-Henning, there were people at the first meeting who expressed interest in writing, but not in drawing, comics; everyone at the second meeting, however, appeared to be interested in drawing.

“A couple of people showed up [at the first meeting] who were interested really in writing comics, but didn’t feel they could draw,” Scott-Henning said. “And there were people who felt they could draw but didn’t have the writing ability or didn’t feel like they were confident enough to create a married story. So people like that, that’s amazing.”

Much of the purpose of the Wesleyan Comix and Graphix Club is to create comics. The group recently received official student group recognition from the Student Budget Committee, which Scott-Henning said could fund the printing of student-created zines.

Other things point to the club’s focus on creating comics. The group meets at the Workshop, a new student art space located in Hewitt 8.

“We want to make sure that the Workshop, the student space, is being utilized,” Phillips said. “It’s perfect that it came at the same time that we did. It’s like we have this whole brand new space we can take advantage of.”

Aside from its creative goals, the club is also interested simply in having discussions about existing comics. If they are to ask for student group funding, Scott-Henning said the group might spend some of its money on buying books, in order to create a comics library.

Having such a space, Scott-Henning said, is important. Comics are serious work, he said, and there should be a place and a community for them on a campus that is as arts-friendly as Wesleyan.

Above all else, the co-founders of the Wesleyan Comix and Graphix Club  want to create a community for comics lovers—a place where, for a little over an hour each week, students can draw, write, and discuss comics. In doing so, they hope to bring comics into the canon.

“I consider Chris Ware’s book, ‘Jimmy Corrigan, the Smartest Kid on Earth’ up there with ‘The Brothers Karamazov,’ any Dickens book, all of canon literature,” Scott-Henning said. “There needs to be comics up in there. Because it has that kind of power.”