End Of Hong Kong Discusses Relations with China and Beyond

Alvin Y. H. Cheung came to the University to speak on Hong Kong and its relations with China. 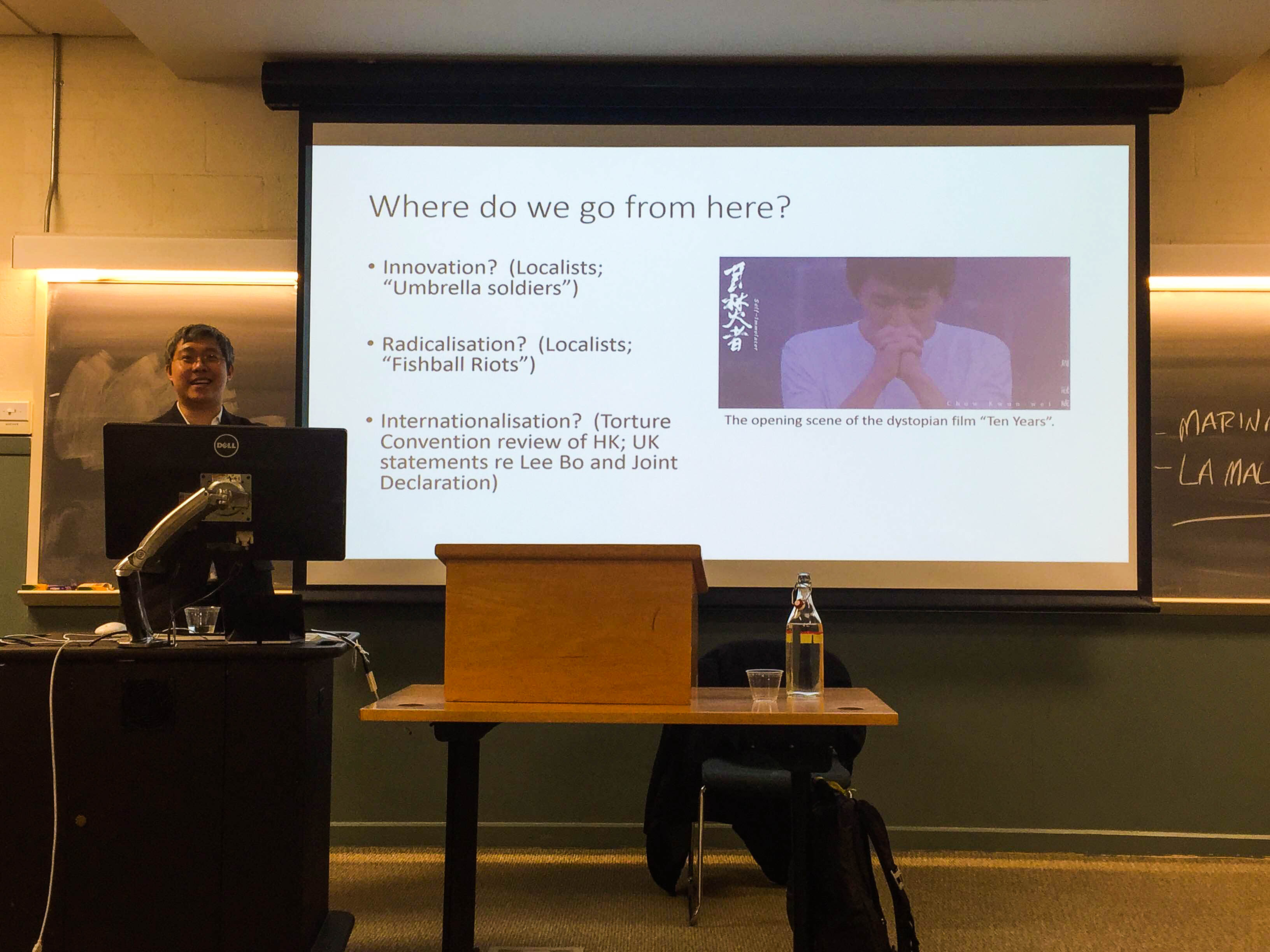 On Wednesday, Feb. 24, Alvin Y. H. Cheung, a prominent scholar in the field of international law, came to the University to speak on Hong Kong and its relations with China. Organized by Nina Stender ’16, the talk was titled “The End of Hong Kong?” and discussed Hong Kong’s implementation of the “One Country, Two Systems” concept.

Stender, who grew up in Hong Kong, reached out to Cheung last semester in hopes of getting him to speak at a series of events she hosted regarding the Umbrella Movement. Cheung was unavailable at the time, but contacted her about holding an event this semester.

“I was researching expert scholars who taught in the area, and [Cheung] teaches at NYU, and so I reached out to him,” Stender said.

Cheung’s area of expertise is the implementation of the “One Country, Two Systems” in Hong Kong and Macau. The “One Country, Two Systems” principle is the idea that there is one China, but there are other regions like Hong Kong and Macau that retain their capitalist economic and political systems. His expertise is also on China’s approach to international law and on the relationship between trade and intellectual policy.

The talk was organized around the currently tense political climate in Hong Kong.

“I feel like a lot of people are unsure about what the future holds for Hong Kong,” Stender said. “I know people are feeling more and more insecure about Hong Kong’s future, but not very many people have an actual prediction on what’s going to happen, and whether China’s grip is going to continually strengthen when it comes to Hong Kong.”

Cheung began his talk by speaking to the four systemic threats that the city’s autonomy faces, namely its democracy, rule of law, the role of mainland China, and the protection of fundamental rights.

When speaking about the election of the executive council, Cheung mentioned how the autonomy in electing this council is supposedly not withheld.

“Broadly representative and democratic procedures are interesting terms, and these are terms Beijing has consistently exploited in order to first delay, and then to deny any meaningful democratic reforms,” Cheung said.

He also spoke about how Hong Kong’s rule of law comes from the top in China. The Chinese persistently speak about how there should be love for the country in all governance. He discussed the White Paper, issued by the state council in Beijing in 2014.

“[The White Paper], among other things, declared that judges and judicial personnel are among those who administrate Hong Kong, and are required to love the country as a basic political requirement,” Cheung said. “Now that is a problem, if you believe in things like judicial review, because if judges have a responsibility to love the country, why would we have judicial review at all?”

According to Cheung, in retaliation to the White Paper, about 1,700 lawyers participated in a silent march. Current judges on Hong Kong’s Court of Final Appeal made statements about judicial independence.

Cheung also discussed the Lee Bo incident, in which bookseller Lee Bo disappeared. Lee Bo is one of five booksellers to have vanished since October, and they all specialized in books criticizing the Communist Party. There is speculation in Hong Kong that Lee Bo has been abducted by Chinese security forces.

“In terms of mainland authorities staying within their legal limits in Hong Kong, it’s a pretty dire picture,” Cheung said.

In the question and answer session, a student asked about what has been done to help Hong Kong internationally, especially with the United Kingdom’s role in the Sino-British Joint Declaration.

“The UK’s foreign and commonwealth office has to date done a terrible job of monitoring implementation of the Joint Declaration,” Cheung said. “If you look at the report issued every six months, the vast majority of them, until recently, essentially said that everything is just fine. Only in the most recent report, after the abduction of Lee Bo, did they even mention that [there] was a serious problem…so a lot more could be done, certainly by the U.K.”

Cheung also fielded questions about the future of the Hong Kong political situation and what can be done about it. One student asked whether or not he thinks it is possible for Chinese and Hong Kong relations to improve.

“The short answer is that in an infinite future, anything is possible,” Cheung said. “The slightly longer answer is that relationships are a two-way street, they always are, and the localism which I addressed before, has an appeal…it could happen, but don’t hold your breath.”

Kush Sharma ’18, an attendee of the event, found the talk interesting and brought a concrete perspective to the situation in Hong Kong.

“I thought the talk was very insightful, but I found it a little depressing [and] frustrating,” Sharma said. “Just because, as someone who’s lived in Hong Kong all his life, seeing stuff that the Chinese government, the Communist Party, has done and is willing to do just to keep pro-democratic people in Hong Kong at bay is kind of scary.”