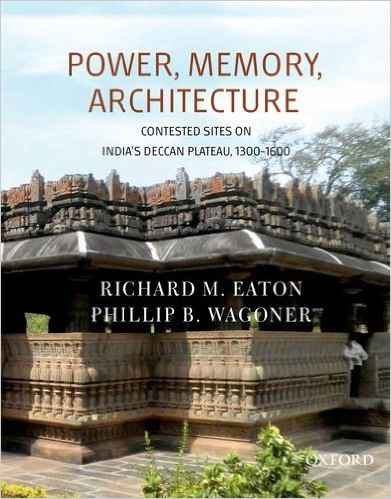 Professor of the Archaeology Program and Professor of Art History Phillip Wagoner was recently awarded the Ananda Kentish Coomaraswamy Book Prize for his book entitled “Power, Memory, Architecture: Contested Sites on India’s Deccan Plateau, 1300-1600.” Co-written by Professor of History at the University of Arizona Richard Eaton, the work focuses on the relationship between history and archaeology on the plateau that is one of the most prominent topographical features of southern India.

The prize is awarded by the Association for Asian Studies (AAS) and is given to breakthrough works relating to South Asia. The AAS is both non-political and non-profit, boasting membership numbers of over 8,000 worldwide. It consists of scholars and individuals who find pleasure in the study of the continent.

“The committee particularly seeks nominations of broad scholarly works with innovative approaches that may concern any topic in any discipline or may cross disciplinary lines,” the AAS website reads.

Wagoner described how he and Eaton had known each other previously and how they came to collaborate on the work.

“Eaton and I have known each other for years, and collaborated in a very general sense (doing conference panels together, etc.),” Wagoner wrote in an email to The Argus. “In the early 2000s, he was working on a book on the social history of the Deccan (the upland plateau of the Indian peninsula), and I was working on the architecture of capital cities in the same region. Coming from our separate vantage points, we both happened to notice that the sixteenth century witnessed a revival of interest in a dynasty that had ruled over the region some five centuries earlier.”

Since they were both specializing in specific and distinct aspects of the region, they decided they would be best served by amalgamating their respective areas of expertise.

“It was clear that neither one of us could get at what this was all about working on our own, so we decided to collaborate,” Wagoner wrote. “In 2004, we applied for a collaborative grant from the Getty foundation and were fortunate enough to receive it.”

During the summers of 2005 and 2006, Eaton and Wagoner carried out their fieldwork on the Deccan Plateau. Focusing on the 16th-century period, the two visited 48 Indian sites corresponding with the era, focusing on three principal sites while documenting others simultaneously.

“We focused on three primary study sites, for which we did extensive survey and mapping, and the rest of the sites we explored and documented in a preliminary fashion,” Wagoner wrote. “We photographed and recorded historical inscriptions, and documented many different kinds of buildings, from temples and mosques to palaces and granaries and city gates.”

Wagoner emphasized the importance of equal involvement between Eaton and himself as they undertook the exhaustive endeavor.

“We’re convinced that the key to the project’s success was that we both went to every site and worked through them together, explaining to each other our distinct disciplinary perspectives and reframing our questions as necessary,” he wrote.

Not including their fieldwork, “Power, Memory, Architecture” took six years for the pair to write. During this period, Eaton and Wagoner synthesized data, determined how they might interpret and analyze it, wrote up the content, and organized the structure of the book. Altogether, the process of researching and writing took 10 years to complete.

“[10] years from start to finish may seem like a long time, but it was an enjoyable and rewarding experience for both of us,” Wagoner wrote.

Professor of Religion and of Science and Society Peter Gottschalk commented on the importance of the work with respect to Indian study.

“The fact that Professor Wagoner and his co-author Richard Eaton won this award…is really a reflection of the overwhelming significance of their latest work, but also reflects their imminence in the field itself,” Gottschalk said. “Both are renowned scholars of Deccan history, in the case of Richard Eaton of the religious and political history of the Deccan, and Professor Wagoner of the art historical background of the Deccan. That’s a reputation that’s very prominent both in the United States as well as in India itself.”

“[The book] does relate in some ways to what I study because one thing that both of these authors have done and which they have been pathfinders for is to challenge notions that there is a stark divide…between Hindu and Muslim cultures, or societies, or art forms,” Gottschalk said. “What [Eaton and Wagoner] have demonstrated repeatedly is that in fact these distinctions very often break down, and that we have to look at things in a much more complicated way to appreciate the incredible overlaps and intermingling of Hindus and Muslims in the Deccan that characterize a great part of its history.”

Wagoner is currently on sabbatical in rural India, where he is exploring the fiscal characteristics of the area by observation and analysis.

“What I’m doing in India at the moment is a new project for me, except that the region and period focus are the same as those of the book,” Wagoner wrote. “I’m working on writing a monetary history of the region—trying to figure out how people used money and for what purposes, what kinds of money they used, and how different currencies interacted in the region. There are very few contemporary written sources on these questions, so the project is based primarily on the physical evidence of the money itself—mostly in the form of coins—which survive in vast numbers.”

In early April, the AAS will award Eaton and Wagoner the prize during its yearly conference in Seattle. Wagoner will also be giving the 2016 Deccan Heritage Foundation lectures, which are led annually by eminent scholars of Deccan history, art, and culture. His talk is entitled “‘Cities of Victory’: The Afterlife of Chalukya Architecture at Vijayanagara and Bijapur.”