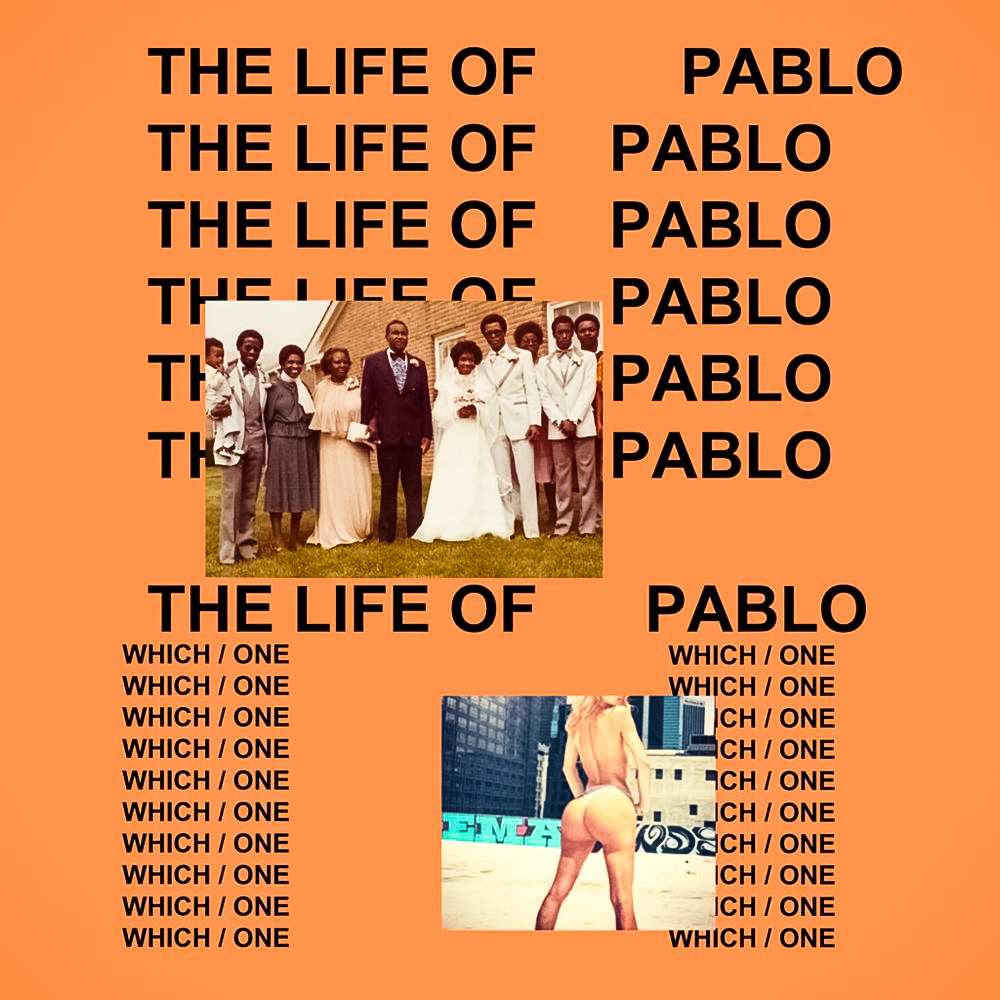 “Can I talk my shit again?” Kanye West asked on “Glory,” one of the highlights of his magnificent third album, Graduation. And after every tiresome and transparently desperate Twitter rant (see “Bill Cosby is innocent”) or self-aggrandizing magazine profile, we collectively ask for more from Mr. West. For Kanye, the gap between art and real life, always delightfully tenuous in his music, has progressively narrowed. However, on his seventh studio album, The Life of Pablo (TLoP), he seems to lose his narrative focus. A kaleidoscopic collage that fuses Kanyes of past and present, the album has the feel of a Jackson Pollock splatter painting–but it lacks the vibrant substance that once possessed his earlier work.

West is famous for his meticulously obsessive creative process—he once made 75 mixdowns of “Stronger” alone—but he now seems to have abandoned this approach on an album that feels more like a first draft than the brilliantly cohesive works for which West is known. TLoP seemingly came together in a matter of weeks, illustrated by a now infamous notepad uploaded to Twitter that showcased its constantly evolving tracklist. It’s only available for streaming on Tidal, and may not even be officially completed, as Kanye made clear when he tweeted, “ima fix wolves,” several days ago, in reference to the track he performed with Vic Mensa and Sia on “Saturday Night Live” last year. The album version swapped out these guests’ contributions for an extra verse from West and a surprise outro from Frank Ocean (nice to know he’s not dead).

With that being said, TLoP is not without its highlights, which offer fleeting yet brilliant case studies into what could have been. Album opener “Ultralight Beam” is the standout track and one of West’s most impressive takes on salvation since “Jesus Walks.” Complete with a full choir and verses from gospel legends Kirk Franklin and Kelly Price, this is church music at its finest. Stripped down to its basic elements, “Ultralight Beam,” is a confessional and a deeply personal song: “I’m tryna keep my faith, but I’m looking for more.” Chance the Rapper—a member of the Kanye School of hip-hop who is probably not exempt from Kanye’s observation, “now I look around and there’s so many Kanyes”—offers the verse he’s been waiting to deliver his entire life. Paying homage to one of hip-hop’s most innovative figures with lines like “I made Sunday Candy, I’m never going to hell/I met Kanye West, I’m never going to fail,” “Ultralight Beam” is a passing-of-the-torch moment.

Always a risk taker, doubtless Kanye could have benefitted greatly from a Rick Rubin-esque editor taking the reigns on TLoP with a good dose of objective analysis. Going gospel was a good move for West, and a return to his soul-ed out roots is the perfect backdrop for his attempt at distilling all the unique sounds of his career into a single cohesive thesis. The unapologetically brash “Feedback” compares favorably with any of Yeezus’ best. “No More Parties in L.A.” showcases Kanye’s most technically impressive verse since the My Beautiful Dark Twisted Fantasy days (“my psychiatrist got kids that I inspired”), and benefits from titillating Madlib production that would have any hip-hop head nodding in approval. “30 Hours” may be one of the most everyman tracks of West’s career, and is a refreshing look back at his pre-College Dropout lifestyle.

Yet, while Kanye tries to deliver what he called in a 2014 interview his “Born in the U.S.A,” on an album even more devoid of quality verses than any of his previous releases, someone needed to tell him to leave bars like this on the cutting room floor: “Black Chyna fuckin’ Rob, help him with the weight/I wish my trainer would tell me what I overate.” While West’s arbitrary asides used to be fascinating and often deeply complex, it seems that his current state of mind doesn’t stray far beyond the pages of Us Weekly. It’s not clear how much Kanye really has to say anymore, or whether he’s really willing to risk everything to make his voice heard rather than obscure it behind a web of heavy concept and aesthetic.

But don’t be fooled. Beyond TLoP’s brilliant run of opening songs (“Ultralight Beam” and “Father Stretch My Hands Pt. 1 & 2.”), West’s shtick becomes unimpressive for the first time. “Facts” is a Jumpman/Future-ripoff and possibly Kanye’s worst song ever, up there with Graduation’s cringeworthy “Drunk and Hot Girls.” For an artist who built a career out of inspiring a cult of copycats, West has never sounded so derivative.

The Vic Mensa and Sia omission almost fatally diminishes “Wolves.” Instead, we get two more Kardashian-inspired verses that Kanye tries to pull off with half-baked metaphors comparing himself and Mrs. Kardashian West to Joseph and Mary. “Freestyle 4” sounds like the rough sketch of something more compelling on an album full of songs that feel like near misses. Even when his disparate and shallow quips are hidden beneath the shimmering beats and sweeping choruses of a track like “Waves,” you can’t help but feel that a more fleshed-out version of West’s vision was easily within reach. It’s frustrating because from Young Thug’s bubbly vocals on “Highlights” to the Sister Nancy sample on “Famous,” TLoP has a lot going for it, possessing all the makings of the triumphant victory lap West meant it to be.

But maybe that’s precisely the point. Kanye’s vision was never to prove that he was the greatest rapper or musician of all time; it was to become a creative force rivaled by only the Walt Disneys and Picassos of the world (the latter of which is rumored to be an inspiration behind the album title). West has joked about his fans missing “the old Kanye” since his verse on “Forever” in 2010, and it’s potentially reductive—and certainly futile—to wish for him to return to that form. Still, while TLoP is a reversion to Kanye’s core elements in some respects, upon close inspection, it’s perhaps his most vapid and soulless album to date. TLoP is a true house of cards, and beneath West’s typically immaculate production and unconventional song structure, there’s little substance in the way of true introspection or bold statement-making. As longtime Kanye collaborator and ghostwriter Rhymefest said of West in an interview with The Daily Beast last October; “I think sometimes people get to a point where they’re so busy—‘I’m doing fashion, I’m doing this, I’m doing that’—that you lose focus with the foundation of what it is. I think sometimes we…we have so many things, that we’re just trying to keep our things, so we lose track of the fact that it wasn’t about the things. You shouldn’t be trying to keep the things, you should be trying to make new things.”

While TLoP may not be a truly regressive effort for West, it offers little in the realm of new insights or experiences. The next time Kanye pleads to be heard, we won’t be able to automatically assume that what he has to say is truly significant.