Jonathan has made it her mission to help her family's village in South Sudan in the midst of a civil war. 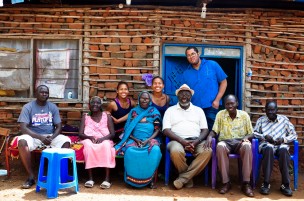 Geneva Jonathan ’15 had her winter break plans in place as early as May. She was going to travel to Juba, the capital of South Sudan; visit with government officials; and spend nine hours in a Land Rover, driving off-road much of the way, to meet with relatives and local health professionals in the small village of Buagji. It would have been her first time visiting the village where her father was born.

Now, she expects to be in her home in New Hampshire, hoping to hear that her cousins and uncles haven’t been killed in the ongoing civil war.

During the summer, Jonathan went to South Sudan with three other people—her sister, Orelia Jonathan ’15, and two students from the University of Vermont—in order to plan a women’s health clinic in Buagji. The group had received about $15 thousand as funding for the project. 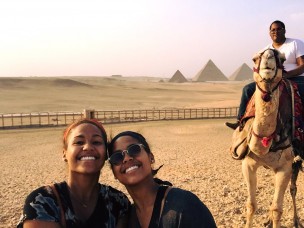 During their visit, Jonathan and the three others went to Juba and met with members of the Ministry of Health and with an architect to create plans for the building and to receive approval from the government for the project.

“[Orelia and I have] had a longstanding relationship with the village,” Jonathan said. “And so I really wanted to take it to the next level in a way that would support women, because women are sort of the center of the family in South Sudan.”

The project is crucial, Jonathan said, because of the poor state of health care in South Sudan. The midwife in Buagji provides services to people living within a 16-mile radius. According to Jonathan, women in the area often give birth in Ford trucks or on the backs of motorcycles.

Jonathan hopes that the new health care facility will help women give birth more safely and will lower the high childhood mortality rates that exist in South Sudan. The facility is also intended to provide mental health and sexual health services to women.

“[It’s] just insane, if you’re having a baby and you have nowhere to go,” Jonathan said. “But also nowhere to go when you’re experiencing trauma from a civil war. So, for all the women who now lost their homes to men who burned their village to the ground, obviously that has a mental health impact.”

Jonathan had hoped to see people building the facility in the near future. But soon after Jonathan’s group left South Sudan, their plans derailed. In September, she heard that Buagji had been burned to the ground by the government army. Members of her family were hiding in the mountains, with some sneaking into the village at night to grab food. The soldiers also burned down the local cellphone tower, preventing Jonathan from hearing from her family.

The attacks are part of an escalating conflict in South Sudan between government forces, loyal to the country’s president, Salva Kiir, and rebel forces, loyal to Riek Machar, the former vice president of South Sudan. Kiir sacked Machar in 2013 and accused him of having orchestrated a coup attempt in December of the previous year. Machar has denied the accusation, saying that Kiir made him a scapegoat in order to rid his ruling party of rivals.

According to Jonathan, Buagji was burned by Sudan People’s Liberation Army—the army controlled by Kiir—after its residents resisted against armed Dinka herdsmen entering the village. On Dec. 2, she reported on a GoFundMe page, one of her cousins, trying to flee by swimming across a river, had drowned as a result of the attack.

Other people from Buagji, meanwhile, continue to hide in the mountains, despite claims from the South Sudanese government that it is no longer launching attacks. There is a sense, Jonathan suggested on her Dec. 2 GoFundMe update, that the unrest in the area will not end for a long time.

“It has been difficult to write or provide updates because of the lack of change in my family and friends’ situation,” she wrote.

Her interest and involvement in South Sudan, she said, are just a side project—something she does after work and during the weekend, in her “downtime.” But it is time-consuming work and work that she and her sister care deeply about. Following the attacks, she created a GoFundMe page and has also sold jewelry made by South Sudanese women to help fund the reconstruction of the village.

She remains hopeful that the health center will be built eventually.

“If I don’t have hope, then who’s to say that this village can have hope, or that any of the women and children that we promised this center [to, can have hope]?” she said.

This winter, however, she will be far from South Sudan. There is still no timeline for the health center. It’s something, she said, that she struggles to accept.

“I come into my office every day and I come home to a safe bed at night,” she said. “And thinking about all of the people that I’ve promised—for this health care center to happen and for [someone] to rebuild the village—it’s a really heavy weight to carry.”