Heading into conference play, the Cards remain winless on the season. 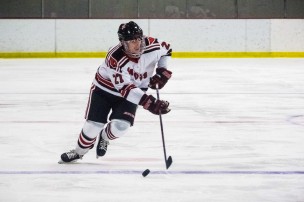 While most Wesleyan students were recovering from a week of tense political conversations with family, the men’s hockey team was back on campus over break to take on the Salve Regina University Seahawks and the stubborn Stonehill College Skyhawks, resulting in a 5-4 loss and a 1-1 tie, respectively, and bringing the Cardinals’ record to 0-1-3 so far this season. Although a crucial first win has eluded Wesleyan, there were positives to be taken from each performance.

“We were playing pretty well in the first [period],” said Robby Harbison ’17, a defenseman, about the loss to Salve. “Then they really started to dominate the game. And they went up, and then we were fighting to get a couple of goals late in the game.”

Starting with a late first period goal from Peter Gintoli, Salve Regina took an early lead, but the game was tight with the Cardinals staying relatively even in shots on goal and possession. Then came two quick goals in the second period from Alex Pompeo and Pat Thompson, who scored on the power play in what appeared to be a back-breaker for the Cardinals. However, Wesleyan rallied remarkably quickly, with a goal from Alex Carlacci ’16 a little over a minute after Salve Regina’s power play goal, proving that the Cardinals could go toe to toe with Salve as long as they were at full strength. Then, less than a minute later, James Kline ’17 powered through to bring the margin to only one goal in favor of Salve Regina.

In the third period, Salve scored twice before the halfway mark, forcing the Cardinals to shorten the bench to have any chance at getting back in the game.

“As far as shortening the bench goes, I think we have four solid forward lines, three really good [defense] pairings, that are capable of playing throughout the entire game,” said Harbison. “I think in the third period we shortened the bench, which happens especially in the tighter games and especially when we get into in-conference games when it really comes down to the wire. But as far as physically and how that’s wearing on us, as far as the whole team collectively goes, I think we’re in really good shape. We’ve been skating since we got to school in the fall, and everyone’s feeling good. I know that there’s one forward line [Jay Matthews ’16-Kline-Vince Lima ’19] that was out there every other shift for the last 12 minutes of the game.”

Coach Potter’s tactical calculation nearly paid off, with two late goals coming from Jordan Jancze ’18 and Matthews, who scored with just over a minute left in the game. Unfortunately, the Cardinals couldn’t force the game into overtime with an empty net, but their persistence in the comeback will hopefully yield better results in coming games.

Although Salve Regina is not a NESCAC opponent, they are proving to be one of the great surprises of DIII hockey this season as they knocked off reigning national champions Trinity the following night in another high scoring game that ended 6-4. Losing by a smaller margin than their powerhouse arch rivals, Wesleyan proved in the Salve Regina game that they can play with the best teams in the country after coming off of their worst season in recent memory. How both Trinity and Wesleyan progress from their losses to Salve Regina will add an extra level of intrigue to their season ending tilt on Friday, Feb. 19.

“A positive was one of our backup goalies, Danny Weiss, was playing and he played well,” said Harbison. “It was his first college start, so it was good to see him get in there and get some confidence under his belt.”

Unfortunately the Cardinals weren’t able to fully rebound the next night against Stonehill after their loss to Salve Regina, which ended in a 1-1 tie, the third of the season for the Cardinals. The Cardinals face off at Amherst this Saturday, Dec. 5, followed by a lengthy road trip to western New York to face Hamilton on Sunday, Dec. 6 in two crucial in-conference tilts.