Regen Routman ’16 sat down with The Argus to discuss her comedy inspirations, her love for TV, and the perils of social media. 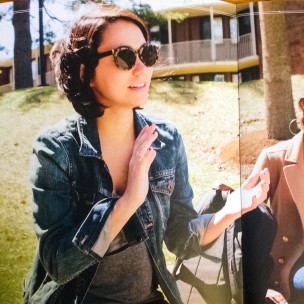 Regen Routman ’16 is widely known on campus for her work in film and comedy. She sat down with The Argus to discuss her lack of an accent, productive procrastination, and why she can never return to the Penn Station Walmart.

Regen Routman: Well, I know I’m nominated because one of my housemates literally went and nominated me. Aside from that, I’m around campus a lot and I’ve been involved in visible projects; people recognize my face occasionally. “Oh, that girl, I’ve seen her somewhere around here.”

A: What clubs are you involved in on campus?

RR: I’m a member of Punchline!, which is Wesleyan’s only standup comedy collective. I do a little bit of student theater, student film stuff. I’m a tour guide. I’m on the Film Board, which no one knows about. [Laughs] We run the Film Series and we make the calendars. They write our names in small print at the bottom—I didn’t know to look for it until I was on the Film Board.

A: How did you get involved in comedy in general?

RR: Well, in high school, I did a lot of improv and theater and stuff. Two activities I enjoy are talking—talking about myself—and comedy. This interview just made my whole month. I tried out for a couple of improv groups on campus, but I didn’t make the cut. Then decided to try stand-up. I was a freshman and I had never done stand-up before, but I decided to give it a try and they let me in the group.

A: Do you write your own jokes?

RR: I do! I write my own; they’re not very good, but I write them anyways. I try to stick to things that have happened to me, real life events. I talk a lot about my dating life, my sex life, hobos. There really isn’t a common thread running through my jokes. I don’t even remember what else… I’ve been working on my thesis, so I haven’t been writing a lot of jokes. I write things down on my phone sometimes, and I’ll come back to them and wonder what I was even talking about.

A: Where do you draw your inspirations?

RR: Things that happen to me, different situations I’ve been in. I’m not unusual here because I’m a vaguely Jewish girl that writes comedy. I’m from Texas, which is a little bit unique at Wesleyan, and I went to an all girls’ school for 13 years. I have these other experiences that may not be that unique to the world, but a weird combination of things. People ask a lot of weird questions about Texas. People will ask, “Where’s your accent?” Every time I give a tour, I tell people I’m from Texas and they’ll notice I don’t have an accent. Well, no. I’m from a big city and it’s the year 2015; I don’t need to have a Texas accent. But I do say “ya’ll.” One time, at a summer camp, this kid asked me if I ride horses to school. No. Does anyone ride a horse to school?

A: Does your thesis have anything to do with comedy?

RR: Yeah. I’m writing a thesis in American Studies about women in sitcoms and the role they play in these sitcoms. I don’t have a thesis for my thesis yet, but it’s mostly going to be able how woman are portrayed in women-driven sitcoms, like “I Love Lucy” or “Broad City” or “30 Rock,” where women are really in the center of the story universe. I’m going to write about how portrayals of women have changed, how TV fits into that, what women’s positions on these shows say about society at the time; I’m not being very articulate.

A: Do you enjoy watching these shows?

RR: Yes. I love TV. I just watched this week’s “Mindy Project.” I’m a huge slacker, so writing my thesis on TV gives me an excuse to watch these shows. If I procrastinate and watch this show, it’s really me working on my thesis. So I could watch three hours of “Roseanne” and say that was really beneficial.

A: What TV shows are you watching now?

RR: Oh man, what am I not watching? I just finished up “Master of None.” It’s cool and modern; it’s great. I’m going back and watching all of the “X-Files.” People forget about how good it is. And also, “American Horror Story,” which is embarrassing.

A: No, it’s great! I just started on the “Freak Show” season. Any plans for the summer?

RR: I don’t have any yet, but I’m looking for a job. So if an employer finds this article on Google, please hire me. I’m very hire-able. Don’t look up my Twitter, but not that I do horrible things on my Twitter. My mom says I talk about sex way too much. Like, “You’re so inappropriate; you shouldn’t swear on Twitter.” My family is very active on social media. Everyone on my mom’s side of the family has an Instagram, like everyone. My mom basically just follows me, my sister, and Huffington Post. She’s very supportive and favorites a lot of my tweets. I don’t know who would follow my mom. So employers, please hire me and add me on LinkedIn.

A: Where did you intern last summer?

RR: I interned with MTV2. MTV2 does a lot of reruns of shows that have previously been on MTV. Their target audience is young men, 18-25. They do a lot more comedy stuff, hip-hop specifically, and live things. We did a show this summer called “Joking Off,” which kind of a hip-hop version of “Whose Line is it Anyway.” They were also shooting this show called “Uncommon Sense,” with Charlemagne and the God, who is a radio personality. He’s very opinionated. I worked with four to five other interns. I was a Production and Development Intern. What that realistically meant was that we bought the snacks and arranged the snacks. We also run other errands.

I remember this other week, when we were shooting “Uncommon Sense,” and there was all this controversy with the Confederate flag. So that day I came into work and my boss told everyone there to try to find a flag because it was for the show. We needed to find a flag in New York that day, so we called and called. People stopped selling them or they had never sold them. Sometimes the VPs and executives would have us watch things in development and pitch ideas to them, with us as millennials, essentially. #young #engaged #millennial #content. So it was a pretty cool job. I’m very familiar with the snack section in Walmart in Penn Station, just because I bought snacks there every day. Never going back.”

The article has been edited to reflect minor transcription errors.