Eric Asimov '80, Chief Wine Critic at The New York Times, reflects on his American Studies background and his affinity for a good Bordeaux. 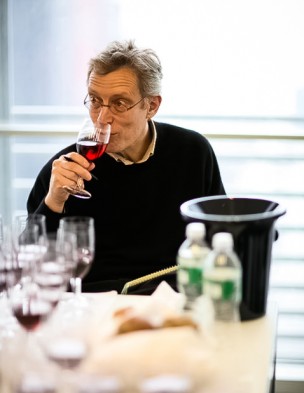 Eric Asimov ’80 has a job that many University students, and certainly any frequenter of a WestCo Wine & Cheese, must dream of: Chief Wine Critic for The New York Times. But how did the American Studies and history major fuse his professional ambitions with an affinity for a good Bordeaux?

“I don’t think there’s any straight path,” Asimov said. “There was a lot of serendipity and there was not so much intention involved. The critical part of the Wesleyan education for me was simply learning how to think skeptically and critically and understanding the importance of history by trying to look at the past and see how it plays into the present. I think those are skills and attitudes that you can apply to any sort of profession.”

“[They] taught you not to accept whatever you’re told, but to think for yourself,” he said.

It wasn’t just Asimov’s professors who inspired him to forgo a narrow academic path in favor of something more eclectic, but his classmates as well, one of whom in particular who would go on to play a critical role in managing Wesleyan’s inquisitive ethos.

“I was in a Philosophy of History class in COL and Michael Roth was in that seminar and I remember him as being like the single fucking smartest person I’d ever met in my life,” Asimov said. “The kind of intelligent people who are drawn to Wesleyan are independent thinkers, culturally aware, curious, and are not afraid to take risks either intellectually, socially, personally.”

While Wesleyan was a haven for Asimov to explore his intellectual curiosities, he knows firsthand that the world beyond college often values a very different type of currency. As technology changes and the newspaper industry continually struggles to reinvent itself in the digital age, even a standard-bearer like The New York Times has had to justify the need for the seemingly niche spheres and culturally quirky columns that fill out the margins of the paper. How do you go about doing your job when the very institution you work for is being forced to question the need for its own existence?

“I will confess that I felt fear as to whether my job would continue to exist,” Asimov said. “There was a really scary couple of years for The Times from 2008 to 2010 where there were layoffs and buyouts and sort of a reshaping of the organization. And if you look around the country at newspapers, what is the first thing that goes? It’s the thing that they regard as luxuries or not essential to their core mission, which for most newspapers is probably covering their local government and civic organizations. In my mind, I was thinking, ‘Well, if they have a limited amount of money, are they going to spend it on a wine critic or are they going to spend it to cover the war in Iraq?’”

Fortunately, Asimov’s fears proved to not be grounded.

“At The Times, almost alone in American newspapers, both because of the philosophy of the publisher and the family that owns it, and because of where we are geographically, cultural coverage is really part of the core,” he said. “I sort of knew this, but I wasn’t completely confident I would be included in that.”

While nobody can know whether The Times was able to survive the restructuring without compromise because of its commitment to covering New York’s dynamic culture, or merely because of its financial prowess, one thing is for sure: the values that Asimov identified as being central to The Times cannot realistically be extended to the rest of the industry.

“If I weren’t at The Times, I would be scared shitless because it’s just not a great time to be an ambitious journalist,” Asimov said. “There are many more venues than when I was young for getting writing published, but there are just far fewer places that pay you. That’s a formula that’s going to have to change. A lot of very talented, smart people are going to choose to do something else because they don’t see a future in it.”

Ironically, then, journalism was initially Asimov’s safe fallback option, something he could do while he chased the dream he left Wesleyan intending to pursue: becoming a professor of American Studies.

“I started graduate school [at the University of Texas at Austin], but then I chickened out,” Asimov said, laughing. “I learned about myself that I didn’t think I would be in the absolute top echelon of creative historians or American Studies people. I thought it seemed like everything I was doing was somehow derivative and that I would always be struggling to get a job somewhere I didn’t want to live. So, rather then devote myself to the prospect that scared me, I switched and went into journalism, which seemed like a place-holding thing for me to earn some money while I figured out what I really wanted to do in life.”

However, before Asimov could leave journalism to chase other ambitions, he was presented with the chance to satisfy his aspirations to write about culture in a truly creative and unique fashion.

“It just so happens that while I was figuring out what I wanted to do, opportunities were presented to me where I could actually do what I wanted to do at The New York Times, which was to write about food and wine in some way,” Asimov said. “So once I got that opportunity, I never looked back and I never really thought about doing something else. And, if for some reason my job at The Times disappeared tomorrow, I would look to continue writing about wine in whatever form I could find because right now I feel like I haven’t come close to running out of things I want to write about.”

As Asimov will be the first to suggest, sometimes you have to craft opportunities for yourself by creatively exploiting the areas where even The New York Times may be lacking. In 1992, Asimov devised a new column for the Times, called “$25 and Under,” which focused on exploring inexpensive and offbeat restaurants in New York. He began publishing his findings in a series of compilations from 1995 to 1998, and also co-authored the annual New York Times Guide to Restaurants in New York City from 2000 to 2004. Eventually, in 2004, Asimov’s time had come: he was named chief wine critic at the Times, and he now writes two columns, titled “The Pour” and “Wines of the Times.”

“I was in a position where I saw that a column like that would be really necessary, I made a case for it, and it just so happens that at that time [1991] there was a lot of competition among newspapers in New York City, and that was an area where The Times was lacking,” Asimov said. “It’s not always easy or obvious, and there have definitely been times of really acute frustration at not being able to do exactly what I wanted to do, as well as a sort of desperation in trying to figure out how I could get there.”

Asimov reflected on how he handled doubt as a young writer attempting to break into an ever-narrowing field, and what he had to do to distinguish himself.

“I know [self-doubt] is what people who are in their 20s and 30s struggle with all the time,” Asimov said. “And it’s not just self doubt or lack of confidence, it’s the question of whether you will get the opportunity to do what you crave doing.”

In Asimov’s case, he had to push to create such an opportunity.

“In my case I was doing a job when I was first hired at The Times in 1984 as an editor in national news that I kind of imagined as a placeholder,” he said. “I worked from 7:30 at night until 3:00 in the morning, and that job came with a built-in free couple of hours. So I spent the extra time working for the food section. I obviously didn’t have to do it; it wasn’t my job, but it was something I was desperate to do. I tried writing freelance pieces for national news. I tried writing about cars. Wherever they would have me I would try and pitch stories. In retrospect, I was probably just a pushy kid who was trying to take advantage of my surroundings.”

Growing up in a family of writers (his uncle was acclaimed science fiction author Isaac Asimov and his father worked for Newsday), Asimov connected the drive to chronicle his interests and his ability to write adroitly to the lessons his father taught him about writing’s importance no matter the profession.

“I think my father, if he was alive today, would be shocked to see me writing about wine,” Asimov said. “He probably hoped I was going to become a lawyer. And I guess I could see other paths I may have taken at some point. When I was younger, I was more fascinated with covering politics, but I also think I foresaw the frustrations of doing that. I may have wanted to become a sports writer. Regardless of what my job was going to be, what my dad did counsel me was that whatever field I was going into, I had to know how to write clearly and evocatively.”

Although Asimov’s creative journey from Wesleyan to The New York Times may have been fruitful because of his relentless intellectual curiosity and impressive versatility as a writer, the path to succeeding in a niche industry such as wine and food criticism seems to also have a lot to do with a different quality he identified: competence.

“I found one time as an editor who was put in the position of finding stories and looking for people who could do jobs, simple capability is maybe the hardest thing to find,” Asimov said. “People who can do a job and do it well. I think I demonstrated over time just a capability and a discipline, which is something that’s really required in my job, and that combined with being in a place where I could critically assess particular opportunities all worked to my advantage.”

If Asimov graduated from Wesleyan with the intention to succeed in writing about culture in an original and critical fashion, it’s easy to understand why he’s so content with exploring the offbeat and quirky restaurants of one of the nation’s most culturally vibrant metropolises and writing about the role that wine plays in influencing the social and cultural norms of everyday society. But there is something deeper to Asimov’s decision to choose journalism as his literary mode of expression and the manner in which he regards the profession, and institutions like The New York Times, as vital.

“We learn again and again and again that American society depends upon on a vibrant group of journalists to play watchdog,” Asimov said. “And, if nobody does that, we’ve seen what happens.”