Who Wore it Wes: Gabby Arias ’17 Goes Back to Basics

Gabby Arias ’17 is the first to admit that she wears too much black. But for Arias, neutrals are where it’s at, and the effect is elegant and clean. Arias sat down with The Argus to talk about investing in fewer, more expensive pieces, looking to Parisian Instagram for inspiration, and ironing. 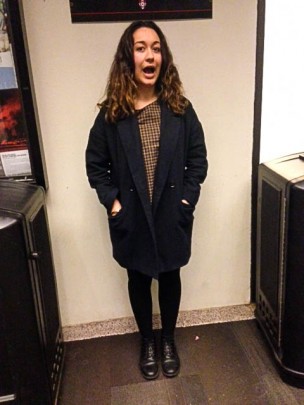 The Argus: Describe your personal style in three to five words.

A: To what extent are you interested in fashion?

GA: I think I was a lot more interested in high school. I feel like every high school girl kind of has a Tumblr phase, and as embarrassing as it is to admit, I definitely had that. But now I feel like it’s less so, but it’s still really easy to be surrounded by it, because I feel like people at Wesleyan dress up a lot [more] than most schools. So I guess as much as your average Wesleyan person.

A: Do you have any favorite designers?

GA: I really like Rachel Comey. She’s from New York. What I like about it is that it’s all about material, not print or color. I wear a lot of black, but she’s all about textures. There’s this one pink coat… and it’s fuzzy, wool or something. And she just has really awesome stuff.

A: Do you own any of her things? Or are they astronomically expensive?

GA: They’re astronomically expensive. But I think it’s really easy to look at designers that you like and either find it on sale or just kind of emulate it. When you look through a catalogue or something, I’ve tried on expensive shit and it just doesn’t look good on me—it doesn’t work. But I think that if you pick and choose what you like about a picture and then find a way that looks for you, that’s what makes personal style really interesting.

A: What are some of your favorite lower-end places to look for things that might look designer?

GA: Well, I do a lot of shopping on sale. There’s this website—they have a boutique in Virginia. It’s called Need Supply Company. Some of the stuff is expensive. But a lot of the stuff is more reasonable, like 50 to one hundred [dollars], which is still ridiculously expensive for clothing, but it lasts a really long time. For me, that’s what important. I’d rather have three pieces that are expensive than 20 that are way cheaper. But Need Supply Company’s a really good starting point, because everything is a neutral color, which I like, and they have clean cuts that are edgy, but probably won’t go out of style.

A: What are your thoughts on in-person versus online shopping?

GA: I really like shopping, but I don’t do it that often. Shopping in-person is more effective, because you can try things on and mix and match. And depending on the store that you go to, salespeople can be really, really helpful. I shop at Aritzia a lot. The salespeople are all basically models—like, they look amazing. But they’re really helpful; I’m not a size two, so they’ll find pieces that work for my body and I feel comfortable in. Online shopping is a really good jumping-point to get inspiration, I think.

A: Where do you go for inspiration online?

A: How did going to Paris influence your sense of style?

GA: Again, it sounds really cliché, but a lot. Just because I already wear mostly black, not very many colors, which is very French. But also, just in being abroad, I didn’t want to stand out at all and be an American. On the metro, everybody has a beautiful coat. It’s all about the coat, and just wearing black jeans and a button-down, or something. Really simple. And I think that’s a good way to describe my sense of style. I think it’s really simple, but just again, the mentality is to invest in your pieces and not have a lot, something that I think I have been able to build upon more since going there.

A: Is there something you’re saving up for right now?

GA: I really want a scarf. Like, a camel-color, wool scarf with fringe at the bottom. My mom had one when she was working in the ’80s, and she lost it, or something, but I’ve seen pictures of her in this really soft-looking, big scarf. I just want something simple like that.

A: Are you into vintage?

GA: Theoretically yes, but I get so fed up shopping at vintage stores. A lot of people at Wesleyan wear vintage things, and it looks really awesome on them, but I hate when I ask them where they got it, and they say, “Oh, it’s vintage.” Because you just can’t try to emulate that, really. But I think it works great for other people, for sure.

A: What’s the article of clothing you couldn’t live without?

GA: I really like shoes, but maybe my blue coat that I’m wearing now. I got it in Paris during sale season. I got it for 80 percent off, which is really awesome. It’s navy blue, which I like because it’s not black—I already wear too much black. It’s decently warm, and I wear it all season.

A: How has your style changed since coming to Wesleyan?

GA: I think I wear a lot more dresses. I never wore a lot of dresses in high school. I always wore, like, an oversized sweater that I would take from my dad, and plain jeans, and a cool pair of shoes. But one, all my dad’s stuff is obviously at home, and two, dresses are really comfortable, and it’s funny, because people say, “You look so put-together.” But the only reason I’m wearing a dress is that I can’t fathom the idea of putting on pants.

A: Would you rather look super put-together, like you put a lot of thought into something, or effortless, like you just threw it on?

GA: Ideally, effortless, but it’s kind of the same way that people try to be really chill here. Everyone tries to be the most chill, but that takes a lot of effort. It’s kind of just bullshit. So ideally effortless, but there’s definitely thought behind it.

A: How would you define style at Wesleyan?

GA: Blundstones. Everyone has them. Just, like, kind of edgy. Yeah. I guess if I had to describe a typical Wesleyan girl, it would be Blundstones, black tights, and a vintage sweater or dress or something.

A: Where do you draw inspiration from on campus? Any icons that go here?

GA: I feel like that’s changed, just because I’ve been abroad. There was someone—a senior—I never knew her name, but she looked so put-together. And it was really loud, too, which is the total opposite of me. I love Solange Knowles’s style, but I would never wear a hot-pink, satin pantsuit. It would look awful, honestly, but the people whose style I like is often the complete opposite of me, and I think I admire that. But I would rather stick to basics, personally.

A: What do you think of the concept of dressing “for your body”?

GA: I think it depends. If you dissect that idea and say, “Dress for what you feel comfortable in,” then by all means, do it. The dresses that I wear, they’re, like, A-line, shift dresses, which literally look like a potato sack on me. They’re probably the least flattering thing. But it’s what I feel most comfortable in. But if someone told me to dress for my body, it would probably be kind of tight-fitting, and really accentuate my waist, and maybe a little more sexed-up, but it’s something I don’t really feel comfortable doing. I’d just say dress for whatever you feel comfortable in and you like.

A: What’s your favorite season to dress for?

GA: Fall. I love fall. There’s sun out, so you can wear sunglasses. You can wear high-heeled boots, whatever, and layer. I like to layer a lot. I feel like a marshmallow in the winter, because it’s so cold in Connecticut, so drab. So everybody looks really frumpy.

A: Are there any rules that you follow absolutely?