The 2013 presidential inaugural poet shares his work and life with Wesleyan students.

What obsesses Richard Blanco, and informs the soul of his poetry, can be summed up in one word: home.

“Every poet is writing the same poem their whole life,” Blanco said at his reading. “What that means, of course, is you have to figure that a writer always has a central obsession, something at the core of everything they touch.” 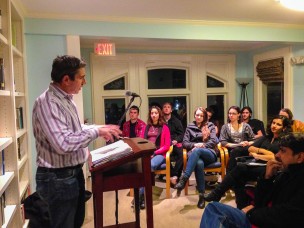 Last Wednesday at the Shapiro Creative Writing Center, Blanco advised a room filled with aspiring writers of many stripes to be keenly aware of one’s obsessions. For Blanco, the space art takes up is occupied by the things that do not have neat answers and the subjects that we just can’t shake.

It is clear that Blanco’s approach has led him to success. The award-winning author of “Directions to the Beach of the Dead,” and former city planner and civil engineer, Mr. Blanco was chosen to be President Obama’s inaugural poet in 2013. The first immigrant, Latino, and openly gay U.S. inaugural poet, not to mention the youngest person to fill the role, Blanco is no stranger to being an outsider and penetrating spaces usually reserved for a selective few.

Tracing his immigrant story in his own words, Blanco reports that he was “made in Cuba, assembled in Spain, and imported to the United States,” and recently moved to Maine for the “diversity,” he said, grinning slyly. But while Blanco has an effortless humor about him, with the turn of a phrase he reveals that he is dead serious: Everyone he grew up with was Cuban, and Maine really did represent an entirely new frontier for him. Before reading his first poem, on ode to navigating between the two worlds of the mythical American and the sanguine promise of mother Cuba, Mr. Blanco spoke about the dichotomous sense of longing that lay beneath the surface of his childhood.

“There was a hope in the community to eventually go back to the nostalgia of the home of our ancestors, where everything was sweeter,” Blanco said. “But also, there was a hope for what America would be like; even though we were here in Miami, we believed we just hadn’t really reached [America] yet.”

In “Betting on America,” Blanco recounts the hours he used to spend watching and betting on the Miss America beauty pageant with his family, grappling with the idea that he is just as American as any of the contestants, even if he could only identify with the wider aspects of Americana that relates to commodities or linguistics. He demonstrates that he knows how to pronounce Connecticut correctly. He proudly identifies that Wisconsin was where cheese came from. But when his mother simply asks where on the map the new “queen of our country, our land of the free,” a native Ohioan, comes from, no one is able to answer.

Blanco elaborates on this sense of loss and longing he felt as a child, which he believes originated from the courageous experiences of his mother, who had to suddenly leave Cuba, and her entire family, behind when she was young. His second poem was mesmerizing, firmly placing the listener in the shoes of a girl who is only given twelve hours to pack a suitcase and leave forever. Its tone is unsparing, daring the audience to imagine leaving home, challenging them with the thought that “it isn’t where you’re born that matters, it is where you chose to die.” Throughout the poem, he repeats the phrase “to love a country as if you’ve lost one,” a mantra that could not have been more fitting.

While Blanco’s heritage informs the content of his work, the writing process itself is deeply influenced by the professional background he pursued before he became a poet. Blanco criticized the highly specialized nature of professional life in the 21st century, where a civil engineer-turned-poet like himself gets confused questions and odd comments wondering how it is possible to succeed in two professions that seem diametrically opposed.

In reality, Blanco believed that all the writing of proposals and plans he executed as an engineer taught him about what he calls the “malleable” nature of language, where pitch, tone and connotation are crucial in persuading agencies like the EPA to adopt certain strategies. The left brain is an ever-present force in Blanco’s work, where the rigorous logic and pattern recognition of city planning assist in the breaking and reconstructing of logic in the editing process.

In “Papa’s Bridge,” Blanco uses architecture, specifically the “slabs of concrete and steel that bent into a bridge, arcing with all its parabolic Y-squared splendor,” as the conduit to explore his warm and loving relationship with his father, who promised Blanco that one day he would be able to build a bridge just like that.

Another element of his character that Blanco explores in his writing is sexuality and its relationship to home. For Blanco, home is a “safe space, where you can live without shame or fear.” In a manner similar to how his relatives longed for the true paradise of America, Blanco spoke about his struggle with overcoming the machismo that inhabits the cultural sexuality of the Cuban experience, yearning to reach a place of comfort. Homophobia and homosexuality are complex phenomena in Blanco’s world, where a myriad of conflicting emotions tint his relationship with his more traditional relatives.

The fourth poem Blanco read depicts the hilarious—and often cringeworthy—details of Blanco’s relationship growing up with his homophobic grandmother. Her “queer theory” included a big list of don’ts for young Blanco: no straws, no perfume bottles, no cats (only dogs), and no drawing rainbows, flowers, or sunsets. While Blanco was encouraged to eat whatever he wanted, Blow Pops and deviled eggs were out. Bagels? That was a maybe. The poem explored the deeper layers of his grandmother’s psyche. While she could be a cruel and unforgiving woman, she was trying to protect Blanco not by trying to change his sexuality, but instead trying to “butch him up” so he could pass as the type of man who would not be ostracized in the old world. While homophobia often holds a religious connotation in the Christian world, Blanco’s experience with prejudice clearly came from a very different place.

The inauguration was a whirlwind period for Blanco. He was tasked by the President (who he can do an admirable impression of) with writing three poems in three weeks, each of which were supposed to be about his American experience. Blanco’s talent as an orator is stirring, and he emphasized the distinct type of preparation for his inaugural address, knowing that the first time anybody would hear it would be live in front of forty million people. As soaring and sweeping in scope as Blanco’s inaugural poem is, it stays close to the recurring themes of home he finds in his family, sexuality, and immigration experience. While writing poetry is one of the “silliest, most arrogant, and most selfish things you can do,” according to Blanco, “it’s also one of the most gregarious and beautiful.”

The questions that plagued Blanco during the period in which he wrote his inaugural poem were broad: What is America, and how do we identify with it? What is home, and in what manner do we quantify the feeling it gives us?

“Does Beyonce have something to do with home?” he posited, smiling broadly. “I’m not sure. I probably should have asked her.”