After demands for greater inclusion on campus, Terp Core released a statement on cultural appropriation. 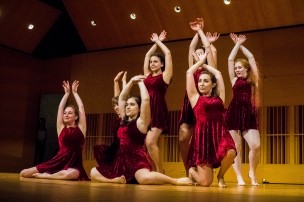 In light of current events and recent demands for greater racial inclusion and sensitivity on campus, the leaders of the dance group Terpsichore released a statement to the University community on Friday, Nov. 20. Following a dress rehearsal on Nov. 19, Terp Core held an unexpected meeting to discuss its relationship with the student body.

Terp Core is a group of seven students that produces and organizes the Terpsichore (Terp) dance show each semester. Its members are Cara Bendich ’19, Luisa Donovan ’18, Emily Freedman ’16, Sarah Greizer ’16, Sonya Levine ’17, Sarah Mininsohn ’17, and Caroline Shadle ’16. These students authored the statement that was posted on their Facebook page on the day of the show.

“Terp’s mission is to provide a dance and performance space at Wesleyan,” the statement reads. “We recognize that we routinely present a show with predominantly white participants, which does not align with our mission of inclusivity. We also realize that there have been instances of cultural appropriation and insensitivity throughout Terp’s history, including dance moves, costumes, and music choices.”

Some members of Terp Core also sent an email to the student choreographers explaining the circumstances and encouraging them to spread the word by forwarding the email to their respective dancers.

“Throughout the Terp process, we have been aware of instances of cultural appropriation in dance moves, costumes, and music choices but have mistakenly remained silent,” the Terp Core organizers wrote in the email.

The Terp Core members explained that they are engaging in a learning process to address issues of racial inequality at the University. This includes using resources on campus to better inform their decisions moving forward, reaching out to the Office of Equity & Inclusion, and holding an open forum in the near future to receive feedback.

“[We] have the responsibility to foster a respectful and inclusive experience and environment,” the statement reads. “We apologize that we have not taken ample steps to create this sort of space and vow to actively develop solutions from this point forward. It is essential that we take responsibility for making Terp more welcoming to students of color.”

In the email to their choreographers, Terp Core addressed the fact that some dances in the performance are offensive to some students’ cultures. 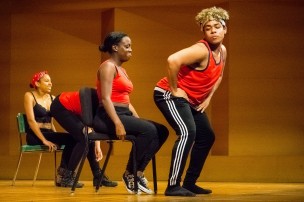 “We recommend you ask yourself where your dance moves, music, and costumes are culturally coming from in relation to the racial makeup of your dancers,” the email reads. “As we are a racially homogenous group of women, Terp Core does not have the knowledge or ability to tell you which specific aspects you can and cannot include. Please use your own discretion to respectfully edit your pieces if you deem necessary.”

However, some choreographers and dancers in Terp argued that it was unfair of Terp Core to speak on behalf of the student of color community. Specifically, some participants were upset when, after Thursday night’s dress rehearsal, some members of Terp Core suggested that choreographers cut part of one dance that had been choreographed to Silentó’s “Watch Me (Whip/Nae Nae)”, citing it as cultural appropriation.

“They spoke on behalf of the dancers of color without consulting us, and Terp Core, as such a removed and unrepresentative group of people, had no right to assert their authority like that and paint the show in a bad light for all of the audience members,” a student of color dancer wrote in a message to The Argus.

Emily Freedman ’16, one of the directors of Terp Core, agreed with the dancer, stating that the organization’s response failed to take into account the views of its members.

“My main concern was that, the way we responded, we didn’t consider the rest of the Terp community in our decision,” Freedman said. “In any organization it’s important to have directors and leaders because otherwise it can’t function but any governing body needs to be representative of the rest of the community and not act independently. Terp Core is not necessarily representative of the rest of the Terp community just in the way we are composed. My co-director Sonya Levine [’17] and I have been trying to make big changes to Terp this year, and this has helped to really bring this to our attention.”

Following this decision, choreographers of the “Watch Me (Whip/Nae Nae)” dance held a meeting on Friday, Nov. 20 to teach a backup choreography. They also held an open dialogue, and, after being told by members of Terp Core that they would support them regardless of their decision, ultimately decided not to change the choreography of the dance.

“Changing [three] moves shouldn’t be the difference between being culturally offensive and not; I think it would be a symbolic gesture with not very much meaning in relation to the scope of the larger issue,” wrote the choreographers in an email to their dancers. “Accepting that we have been running this dance in front of others for [three] months is us accepting responsibility for whatever the reaction is going to be is better in my opinion.”

The choreographers further added that conversations are more productive and worthwhile than simply cutting the dance. 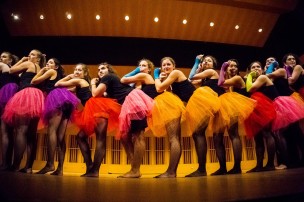 Following these conversations, both Terp Core and the choreographers expressed the desire to make the organization a positive experience for all.

“What we really want to come out of this issue is to start an open dialogue about the nature of Terp and of dancing in general that is inclusive of all members of the Wesleyan community,” said one of the choreographers of the dance. “Including more voices in this conversation will help us learn a lot about what positive changes the entire Terp community can make in future semesters.”

Freedman echoed this sentiment, explaining that the group plans to work toward increased inclusivity in a number of ways, including reaching out to other dance groups on campus to perform in the Terp showcase next semester, an idea that Terp Core has been discussing since the beginning of the semester.

“The primary way that we feel that we can extend our reach within the community is to invite all the different dance groups on campus to perform in the show,” Freedman said. “That would give the show much more dimension…. To give other dance groups the opportunity to perform with such a big audience would be great [for them], and would also be great for us because the show would be comprised of [many] more styles of dance. We’re definitely going to plan on extending that invitation to any dance group on campus that would like to perform in the show.”

This article has been edited to correct inaccuracies.