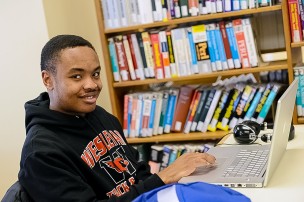 Chando Mapoma ’16, known as much for his CSS prowess as for his Zambian accent, sat down with The Argus to talk about interviewing prospective students, global refugee politics, and his upcoming thesis on the Négritude movement.

The Argus: In our email correspondence, you said it was an honor to be nominated as a WesCeleb. Why is that?

Chando Mapoma: Yeah! I know a couple of people you’ve interviewed before, and it’s really cool company. I have humongous friend crushes on some of those people.

CM: You know, when I first came to Wesleyan, a week [after] I arrived, I emailed my pastor back home in Zambia and I was like, “I’m not supposed to be here. It’s not for people like me.” So I’ve always been in awe and super appreciative of being at Wesleyan and of the opportunities it has given me. And so, I think the passion with which I throw myself at things I’m interested in, people notice that. I also try my best to make really, really full relationships because I believe relationships are the stuff of life. That maybe has to do with why [I was nominated].

A: That was so beautifully put. I also wonder if WesCelebs prepare for that answer because it’s conventionally the first question in the interview.

CM: [Laughs] No, I didn’t think about that beforehand.

A: What do you do on campus?

CM: I’m going to start from the most recent. Right now, I’m a senior interviewer, which is the most fun I’ve had at any job on campus. I interview these awesome kids who are trying to come to Wesleyan—really smart. Then afterwards, I write a one-page blurb about them. The best part about this job, quite honestly, is the community of other senior interviewers. Literally, 14 new friends that I made my senior year, just great company to be with. I also sit on the Student Judicial Board, and I like the community there as well. It’s an interesting perspective to sit somewhere in between an administration and the student body and see these things from both perspectives and analyze issues that way. I’m also the President of the African Student Association, which is a special post for me, just because this association was a family for me when I first got to Wesleyan. I had 40 peer advisors surrounding me; everyone was so invested in me doing well. I want to maintain this great community for the incoming students.

A: Were there any specific obstacles you had to overcome when you arrived at Wesleyan?

CM: Probably writing. It’s something I love to do and want to do it well. Writing papers at an American college was something I had to really work through. One thing that I think a lot of domestic students take for granted is that they’ve been prepped throughout their academic years and the transition into college writing seemed seamless.

A: What drew your attention to the CSS major?

CM: I kind of stumbled upon it, quite honestly. My father is an economist and my grandfather was an economist, so I thought econ was in my blood. Turns out, I don’t like econ at all. I was attracted to CSS because it didn’t require me to pick one social science to study; I could study all of them in a way because they were married really well. It’s been a great intellectual foundation for me. I was attracted to how smart the CSS students sounded, acted, and are. If there’s one thing I would change about CSS, is the very nature of the type of people CSS attracts. A lot of people I talk to, who I think would thrive in the CSS major, seem to have this perception that CSS is for a certain type of person. [There] ends up being very little diversity of thought.

CM:  Law school is somewhere in the horizon. I feel like a lot of CSS people feel like it’s the natural progression of things. I actually know why I want to go to law school. I’m really interested in international law, immigration policy, and human rights advocacy. I’ve applied to a couple of fellowships, like the Watson. The application I put forward was to study alternative forms of refugee detention in different countries. What tends to happen in the majority of these countries is that refugees arrive, and they are incarcerated for, like, two years while their papers are being processed. I want to look alternative forms of dealing with this, like, do we really have to incarcerate them? Are there other ways we can deal with this issue? I think a degree in law, especially from an American university, will help me deal with these issues on an international level.

A: Is this the topic for your thesis as well?

CM: Um, no. My thesis is about literary movement called Négritude in the interwar periods. Three black students in France propagated it. They were fighting against this idea that Africa had no culture and European culture was superior. They wrote some iconic literary works in this movement. I want to see if the ideas of Négritude can speak to multiculturalism and immigration in France today. It’s such a rich topic; I just hope I can do justice to it.