Squash Eager to Enter the Cube

While the men's team returns eight of last year's top ten, the women welcome five new faces to the squad 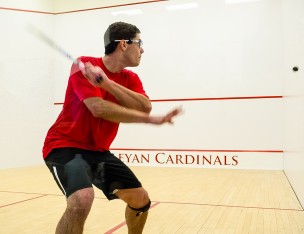 Men’s and women’s squash will hit the cube this Saturday in Cambridge, Mass. for their first competition of the 2015-16 season. Both teams will compete in round robin-style play at Harvard University. At 11:00 a.m., Wesleyan forces will do battle with The University of Virginia. Last season, the women bested the Cavaliers 8-1 in the final match of the season. Virginia, despite being ranked 39th on the men’s side and 31st on the women’s side, is a massively improving squash program that experienced major turnover from last year to this year. It will prove a competitive litmus test for both squads, whose rosters have undergone big shifts as well. Then at 2:00 p.m., the Birds face off against NESCAC foe Bates, who are ranked handily above both squads—14th on the men’s side and 15th on the women’s side. Both matches will prove extremely tough openers for the Cardinals’ outfits.

Two new assistants join 10-year head coach Shona Kerr: Tim Bacon, who formerly coached the Canadian national team, specializes in strength and conditioning and sports psychology; and Steven Milo, who was a successful collegiate tennis player at Brandeis University, brings intensity and motivation to practice. With more coaches, each member of the team will receive more specific instruction and in more specialized ways, which will undoubtedly improve the squad’s performance.

The women’s team enters the season ranked 22nd nationally after posting an 8-12 mark last season. Theirs was an up-and-down season of competition, with highlights including NESCAC victories against UConn and Tufts. The squad underwent massive turnover between last season and this season, though, as only six players (two of whom are abroad this semester) return to the lineup. Graduating five players and losing one to transfer, the squad had to get creative to field a lineup. In addition to recruiting three first-years who will bring youth and energy to the team, Coach Shona Kerr reached out to two non-squash athletes on campus who have joined the squad and are fast learning (and re-learning) the ways of Wesleyan squash. The converts are Ellen Paik ’16, a former rower, and Tessa Hill ’16. Captains Liza Bayless ’16 and Bridget Doherty ’16 are currently the only other upperclassmen on the squad, with juniors Abigail Smith and Annie Ferreira studying abroad during the fall semester. They, of course, will be back and ready for action come January, when the squads return early for winter break.

“We definitely have a smaller team this year so it’s been a little bit of an adjustment figuring out how to pull together a full team, but preseason was really good,” she said. “The freshmen are super enthusiastic. It’s been fun to have a lot of new energy on the team.”

It constitutes a big change from her previous experience with Wesleyan squash, one that she and the rest of the team are readily embracing.

“It is new because we had like 14 girls my freshman year,” she said. “It is really new, which is both good and bad. There’s just a lot more of a new level on our team than we had in the past, so it feels really different, but it’s also really exciting. The small team has allowed us to get to know the freshmen really well, and I think they feel a lot more comfortable on the team than probably I did my freshman year, when I was more intimidated by the huge team. So in that way it’s been really cool.”

Paik elaborated on what it’s been like to join the team as a senior.

“It’s been awkward at times being a new senior to the team, but I’ve had an absolutely incredible time so far,” she said. “I’m so grateful for the opportunity to be part of this team, even if it’s only for a year. There is a lot of excited, fresh energy within this group and we’re so excited to kick off the season by playing our first matches against UVA and Bates this weekend in Boston.”

Bayless stressed how productive preseason has been.

“We saw a big change when we were doing fitness tests,” she said. “By the end of preseason we were all within a similar margin of each other. Everyone was just a lot closer together time-wise and that’s really helpful as a team to be within the same fitness range because everyone can push each other.”

Laila Samy ’18 returns to the squad after posting a 17-0 regular season record at the number one spot for the Cards. A serious contender for the individual national championship, ranked 9th nationally, Samy’s dominating skill will prove a major asset for her squad. The Cards should never lose at one.

Bayless, who will likely play in the two spot on the team, commented on Samy’s influence on her and on the team.

“I’m excited because I’ll probably be reffing for her and seeing her play, and it will force me to really pull it together when I’m out there,” she said.

Indeed, brilliance at the top, returners ready to step up in the middle of the ladder, and new squash players at the bottom will prove three compelling storylines for this year’s women’s team.

The men’s team comes into the season ranked 20th nationally. In last year’s nationals, the Cards finished 4th, on seed, in the C division of the national tournament. After beating Colby in perhaps the most exciting possible fashion—a thrilling five-game victory by Chris Hart ’17 to tip the scales 5-4 in the Cardinals’ direction—the team fell to Middlebury in the semifinals, and then to Brown University in the third place match to finish fourth.

Despite missing mainstay Alex Kamisher ’17, who also traveled abroad this semester, and a preseason injury to captain and top-seeded player Guy Davidson ’16, the squad anticipates a strong opening to the season. But, as always, it will be aiming to peak by the time regional and national competitions roll around in February.

“We had a really productive preseason,” Zachary Roach ’17 said. “Everyone came into the year fit, and it was our most intense one in the last three years.”

“The way we’re getting along right now is awesome,” added David Sneed ’17. “Last year we didn’t have any freshmen, but this year there’s four new players so there’s a lot of new energy and it’s really rejuvenating the older players. There’s no complacency.”

Four first-years revitalize the squad, which also has eight of last year’s top ten players returning to the team. Kevin Le ’19, a new player, expressed his excitement for the season ahead.

“What’s exciting is that over preseason everyone’s been on top of their game,” Le said. “And it easily translated over to the actual season. Everyone’s playing really well, and I think we have a really deep ladder this year so I’m really excited for our first match, to see what’s to come.”