Hunger Banquet Promotes Hunger Awareness in Middletown and Beyond

Two student groups, the Interfaith Council and Hunger and Homelessness, hosted the annual Hunger Banquet to raise awareness of hunger on a local and global scale . 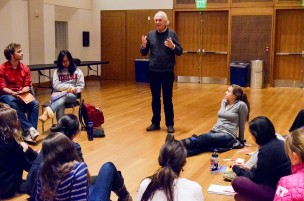 The Interfaith Council and Hunger and Homelessness Program hosted a Hunger Banquet in Beckham Hall on Tuesday, Nov. 17, with the goal of promoting awareness of hunger and economic inequality both in Middletown and in a broader global context. Upon purchasing tickets at the door, attendees were given colored tickets that indicated their meal and seating arrangements. First, facts on hunger were presented, with discussion following the presentation and the meal, which in turn was followed by a question session with Vice President for Equity and Inclusion Antonio Farias, the master of ceremonies.

President of the Interfaith Council and Coordinator for the Hunger and Homelessness Program Lydia Ottaviano ’17 gave a history of the banquet at the University.

“Previously it was run by the Muslim Student Association, and basically took this notion, the fact that fasting is this big part of this religious and spiritual endeavor that a lot of people try and do at least once, and kind of bring that to the broader interfaith Wesleyan community to get the whole community involved,” Ottaviano said.

Ottaviano discussed the fundraising goals of the banquet, stating that the donated dollars and points would go a local food pantry, where those in need could then redeem them at local grocery stores or Weshop.

“I was not here when the last fast-a-thon happened, but it raised a lot of money towards a specific cause,” Ottaviano said. “This year we’re putting money towards the Amazing Grace Food Pantry… so through our cash donations where students will buy tickets for cash… or they can donate points at the door of the event, all of that will go to the Amazing Grace Food Pantry, and they can go to Weshop and elsewhere with the points and they can use the cash to buy food to stock their pantry.”

Alicia Strong ’18 was in attendance, and discussed the format of the event, stating that the event’s structure was thought-provoking and nuanced.

“What they did was, they had different meals for the different incomes,” Strong said. “So the high-income people got the best meals, got the most meals, and the low income people just got rice. So we kind of split up that way, and even to add more nuance to it, they had the male-identifying people get food before the females, because in middle and low income situations, the males will typically be the ones working, and so they need the most nutrients, so they eat first. It really put a lot into perspective, and afterwards we reconvened and talked about how that made us feel, and how that felt to see high-income people eating at the table with really great food and low-income people eating on the floor, and I think it was a really great dialogue, and it really put things into perspective…. It makes me want to go out and do more for hunger and homelessness.”

Fred Ayres ’17, Coordinator of the Hunger and Homelessness Program and fellow event organizer, commented on the event and compared it to similar events in years past, stating that this year felt more solemn, yet also more intimate, with the keynote speaker Farias often responding off-script.

“This year’s event felt far more solemn, possibly a result of having the event in the somewhat austere Beckham Hall,” Ayres wrote in an email to The Argus. “The subject matter of the event, already quite serious, further set the tone for the event. Although we had a smaller group than our event last year, it appeared that the more intimate setting allowed more people to open up and share their feelings and thoughts. A cool sort of dialectic was formed regarding how best to address poverty and world hunger and what our roles as Wesleyan students could be. Farias often went off script to discuss inequities caused by climate change and globalization, which really brought the point home for attendees.”

Ayres elaborated further, stating although turnout was lower than expected, the discussion was powerful.

“The turnout was markedly less than what we were planning for,” Ayres wrote. “A last minute date change might have kept a lot of people away…. Antonio Farias facilitated some very powerful conversations about the inequality that exists in the United States as well as on a global scale. Additionally, the Executive Director of Saint Vincent de Paul, Ron Krom, spoke about the solutions that currently exist in the city of Middletown…. It’s a strange hope, but I hope the event was visceral for the attendees. What they learned and what they felt should serve as the impetus for meaningful service.”