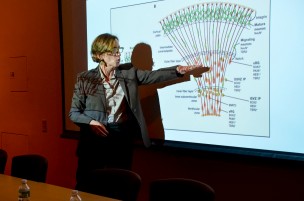 This year, the Philosophy Department’s annual Faust Lecture in Ethics, titled “Neuro-Ethics: Questions and Controversies,” delved into the topics of deep brain stimulation, memory modification techniques, and human-mouse chimeras. Held on Thursday, Nov. 12, the event featured Adina Roskies, Professor of Philosophy at Dartmouth College; S. Matthew Liao, Director of the Center for Bioethics at NYU; and Laura Grabel, Professor of Biology and Lauren B. Dachs Chair of Science and Society.

The Faust Lecture in Ethics is endowed by Halley Faust ’05 and addresses issues at the intersection of bioethics and medical ethics. Previous topics have included egg donation and the Global Health Fund. Lori Gruen, William Griffin Professor of Philosophy and Chair of the Philosophy Department, convened this year’s lecture.

Roskies spoke first on the subject of brain interventions and agency, using deep brain stimulation as a case study. Deep brain stimulation (DBS) is an FDA-approved treatment for Parkinson’s Disease and Obsessive Compulsive Disorder, in which a surgically implanted pulse generator delivers stimulation to electrodes in the brain.

“It almost sounds sort of futuristic, like there are these cyborgs running around that have computerized stuff integrated with their biology, but it is in fact true,” Roskies said. “There are about 125 thousand people right now walking around in the world that have electrodes stuck deep into their brain and a stimulator stuck under their skin that can be remote-controlled.”

To highlight the benefits of this type of brain intervention, Roskies shared videos of a man with Parkinson’s Disease and a woman with severe depression who had experienced relief from their symptoms through DBS.

“I want you to be very conscious of the positive sides [of DBS], like why we would want this kind of thing at all,” Roskies said. “There are very good things that these types of therapeutic techniques can do.”

Roskies acknowledged, however, that DBS is often a last resort for patients suffering from debilitating disease.

“When you think about [DBS patients] in terms of agency, you have to think about how the disease affects their agency,” Roskies said. “So what you care about is, ‘Are these people better than they were without this treatment?’”

Roskies predicted that DBS research will continue to expand the knowledge of agency at a neurological level. She then clarified that locating agency in the brain and discovering its limits under DBS doesn’t exclude self-determination.

“It doesn’t mean that agency is an illusion, but maybe our conception of agency is incorrect,” Roskies said. “Agency is probably not this unilateral dimension, where people just fall along a single line with more or less.”

Liao followed with a presentation on memory modification techniques. He began by discussing current experimental procedures to selectively erase or neutralize traumatic memories and suggested that with a decade, we will rely on these advances to improve our wellbeing.

“We are on the cusp of developing a certain kind of technology… that will give us an unprecedented ability to peer into our minds and to influence specific neural processes,” Liao said.

Although these technologies could help victims of abuse or soldiers with post-traumatic stress disorder (PTSD), Liao cautioned that they also have the power to distort our self-perception and restrict our moral agency.

“Memories are evidence for events that have taken place. Modifying our memories could therefore alter what we believe to be true about certain events and cause us to live in falsehood,” Liao said.

Liao then addressed the military’s development of “DBS Plus,” which could preempt PTSD or increase soldiers’ adrenaline to make them less fearful.

“What DARPA [the federal Defense Advanced Research Projects Agency] wants to do is come up with the next generation of devices that do not require user input and that can read and monitor the brain’s activity in real time and automatically intervene in these activities,” Liao said.

Comparing the use of the DBS Plus in battle to doping in sports, Liao questioned the ethical impact of these devices.

“The point of banning doping in sports is to ensure fairness. But do soldiers care about fairness? Would they voluntarily give up Apache helicopters and night vision goggles just to level the playing field?” Liao asked. “Soldiers may want to have DBS Plus precisely because it confers combat advantage.”

Lastly, Liao explored the implications of the extended brain hypothesis on privacy and personal identity. According to this model, devices whose functions resemble cognitive processes—for example, information storage —should be considered part of the mind.

Ultimately, Liao refused to condemn the use of memory modification technologies as a whole.

“It’s worth recognizing that our identities are amazingly fluid and inconsistent,” Liao said. “So I think it does not have to be morally problematic to use neuro-technologies to shape our identities.”

As the final speaker, Grabel discussed her research on temporal lobe epilepsy. Her lab has derived interneurons from human pluripotent stem cells and transplanted them into mouse brains, producing human-mouse chimeras.

“Our goal here is to create models that are going to take us towards stem cell therapies to treat various neurological disorders,” Grabel explained.“[The] experiments that we’re doing now are looking at whether these cells can, in a mouse model of epilepsy, suppress seizures and restore behavioral deficits like memory problems.”

She next probed the neuro-ethical consequences of human-mouse chimeras, particularly in relation to higher cognitive function.

“Will this somehow give the animal human consciousness, human mental capabilities?” Grabel asked.

As a case study, Grabel cited the work of Dr. Steven A. Goldman, a professor at the University of Rochester Medical Center who has inserted human glial progenitors into mouse brains.

“It looked like the human-derived glia took over the mouse brain,” Grabel said. “[The researchers] also noticed that in a number of behavioral tests, the mice appeared to get smarter.”

Grabel noted that as of this September, the National Institutes of Health (NIH) has introduced a moratorium on the transplantation of human pluripotent stem cells into all vertebrate embryos, including mice. This could limit the ability of labs receiving federal funding to study human tissue development and the generation of human organs for transplant within animal hosts.

Carolyn Dundes ’17, a Biology and College of Integrative Sciences major, attended the panel as a member of Grabel’s lab. Dundes said she enjoyed getting a fresh perspective on her chosen field.

“It’s really easy to get caught up in the science when you’re so interested in your field… and you kind of have to take a step back sometimes and think about the broader implications of your work,” Dundes said. “It helps to think about your research in a very different way.”