Trump's appearance on “SNL” reminded audiences of just how neutered the show has become. 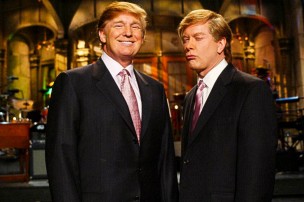 Larry David’s Bernie Sanders wants your vacuum pennies, and Donald Trump wants your love and undivided attention. In a desperate attempt to garner ratings, which in fact, succeeded with a 47% increase in ratings from the previously most watched “SNL” this season, NBC invited Donald Trump to host “Saturday Night Live” last Saturday night–despite protests outside 30 Rock calling for NBC to cancel the xenophobe’s appearance. One political action group went as far as offering a $5,000 “bounty” to anyone willing to heckle Trump, which was met by none other than Larry David mock-heckling the host, calling him a racist. Despite all this, the show was an underwhelming flop, with Trump acting more like a hall monitor than a funny host.

Just a few months ago, Trump was railing against NBC for pulling the plug on his “Miss Universe” pageant and for canceling “The Apprentice,” and yet he found himself back in 30 Rock for Saturday night’s show. This was part of a larger effort by executives at NBC and staffers in the Trump camp to mend severed ties between the network and the mogul, and the result was one of the worst “SNL”  shows in its constantly scrutinized modern history.

Starting with a cold open that mocked MSNBC’s Democratic Candidates Forum hosted by Rachel Maddow, who was played unconvincingly by the normally standout performer Cecily Strong, Trump’s “SNL” was filled with potential to be the best political satire of the 2016 race thus far. It ultimately could not live up to such potential, but this was more the fault of Trump than it was that of the cast. Kate McKinnon remains one of the show’s top performers, with her impression of Hillary Clinton becoming more hilarious and frightening with each passing week. Taran Killam plays a great Trump, and would have been funnier if it weren’t for the stiff presence of the real Donald Trump during the opening monologue.

“SNL” also has former writers and cast members in its arsenal that keep the show funny. Larry David’s impersonation of Bernie Sanders remains incredibly entertaining and accurate, showing the neuroses of the democratic socialist. Darryl Hammond remains a presence with his convincing impressions of Bill Clinton and even Donald Trump, which were featured in the opening monologue next to Killam and Trump himself.

On the bench, “SNL” has talent that unfortunately was not featured enough in the Trump show. Staten Island’s Pete Davidson has the potential to be the best millennial on the show, but he was only included as a teenage son in a family dinner skit that featured Trump as a sleazy music agent. Jay Pharoah gave an excellent impression of Drake only for it to be ruined by Trump dancing to “Hotline Bling,” which, unfortunately for Trump, was the best part of his performance. Vanessa Bayer could have been great if Lorne Michaels had let her play someone other than a pre-pubescent boy.

Conveniently missing from the show was the man responsible for this comedic atrocity: Lorne Michaels. One has to question his decision making at the helm of “SNL” after this episode. According to The Guardian, Trump even vetoed sketches that he thought were “too risqué” for his high poll numbers. Although Michaels has discovered and cultivated some of the best talent in American comedy, he also bears the blame for the current show’s series of flops that culminated in Trump’s show.

One example would be the horrendous Trump cabinet meeting sketch, which ran on the premise that in 2018 President Trump will have delivered on all of his baseless campaign promises, such as making Mexico pay for a multibillion dollar wall and for America to start “winning again.” Every single performance in the sketch was profoundly disappointing, mainly because there is little left to mock about Trump’s campaign platform, or lack thereof.

Kyle Mooney, best known for his viral performance in the YouTube series “420 Disasters,” a crucial part of the cannabis canon for many millennials, remained unconvincing as an economist in the Trump cabinet, or anyone other than a San Diego stoner, for that matter.

One bright spot in Saturday night’s show was the Weekend Update, hosted by writers Colin Jost and Michael Ché, who rarely appear in other sketches. Ché in particular was impressive, with his biting commentary on Trump’s racism and his consistent satirizing of race relations in America more broadly. Assisting in this effort was Jost, who frequently exemplified white fragility and ignorance in his interactions with Ché and frequent guest Leslie Jones. Jones, another underutilized bench player on “SNL”, has delivered stellar performances on Update as of late.

Another highlight of Weekend Update was Bobby Moynihan’s now established Drunk Uncle character, who exemplified the xenophobia of some Trump supporters who are nostalgic for an era that never existed. As Ché pointed out, Trump’s belief that America was once great should be a cause of great concern for anyone who is not a well-off white male.

Although Trump’s “SNL” was an incredible flop, there remains hope in Lorne Michaels’ cast of young comedians with great potential. As the brilliant statistician Nate Silver tweeted with his Trump hat meme, it is time to make “SNL” great again.