Last Thursday, the CIR held a discussion on the management of the University's endowment.

The University Committee for Investor Responsibility (CIR) hosted a lively conversation on the University’s endowment on the evening of Thursday, Nov. 5. The event was a way to inform and discuss with the University community the implications of certain changes in investment practices and the fact that most of the University’s investments are managed externally, all within the context of social responsibility.  The event also served to explain of the purpose of an endowment and how it is managed, specifically the way external managers are selected in different spaces and how their actions are monitored.

The CIR is an independent body that is tasked with advising the University on the ethical aspects of the endowment.

“We are tasked with voting [on] the university’s direct shares (as opposed to assets managed externally by outside managers) in corporate elections; these are called proxy votes, Joel Michaels ’18, the CIR member who moderated the conversation,” wrote in an email to The Argus.

“The investment office, run by Anne Martin, runs the endowment and the oversight of managers on a day-to-day basis, but ultimately bigger investment decisions are made by the Investment Committee of the Board of Trustees, which has sole fiduciary responsibility over the school’s assets,” Michaels wrote.

The panelists discussed internal versus external management and, more broadly, the ways in which environmental, social, and governance (ESG) factors play a part in the decisions to invest in different corporations. Overall, the panelists reached the consensus that considering ESG when making financial decisions benefits the endowment financially. 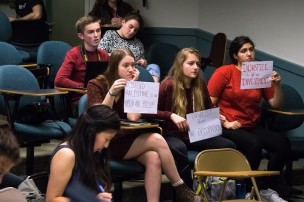 “Essentially, the purpose of the event was to better inform students and the rest of the Wesleyan community about how the endowment is actually managed—which isn’t often talked about, except in overly-broad generalizations—and spark a genuine dialogue,” Michaels wrote.

Mira Klein ’17, co-chair of the CIR, felt that the event reflected a high level of student interest.

“I thought the high attendance at the event itself demonstrated broad student interest in how the endowment works and opening up lines of communication between the students and those who work in the investment office,” wrote Klein in an email to The Argus. “It is an opportunity for students to directly engage with administrative actors like [Chief Investment Officer] Anne Martin to let her know where they stand as more than just passive learners, but as active members of the Wesleyan community.”

The audience members were handed the Investment Policy Statement, published February 26, 2015, the purpose of which was to guide the Wesleyan Board of Trustees, Investment Committee and investment staff in effectively managing, monitoring, and evaluating the investment of Wesleyan’s endowment portfolio. This document also outlines the University’s incentive to grow the endowment as it is a function of its investment rate of return, withdrawals, and additions.

“[This is a] chance to give you an idea of how we do things, what issues we think of and how we manage the endowment,” Martin said.

Attendees were provided with a thorough account of the University’s what endowment is, what it is used for, how it is spent, and the way it is managed. 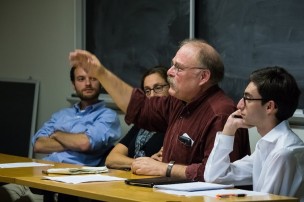 “The endowment helps to support the academic mission of the University,” Martin said.

Professor of Economics Gil Skillman spoke on a variety of topics surrounding the endowment, such as the notion of a mission-sustaining budget and of endowment pursuit, as well as where the University stands in terms of its academic peers.

“[Your] coming to Wesleyan should not be a result of the accident of your family income,” said Skillman.

Noah Markman ’13, an advocate for sustainable business practices, spoke on ESG practices and how to integrate them with financial decisions.

A question was raised to regarding ethical questions. Namely, it was asked how one defines an ethical investment, when they are made, and when corporate practices become so egregious that they need to be addressed.

In response, Markman discussed how people often create a tension that does not exist between responsible investments and returns.

He further added that better business practices are usually associated with ESG goals.

“We are all under the obligation of do-no-harm,” Martin said. “We don’t feel good about investing money in something like tobacco…. The ESG policy is really just articulating an investment process that is clear and ethical.”

Skillman added that is important to take moral guidelines into account, but they may have costs.

The panelists were asked to identify the end goal for the University’s endowment.

“If you have a clear sense of what you need to do, we’re good,” Skillman said. “What is the point of trying to stockpile money if we have the money to support what the Wesleyan education is all about? However, we have a long time before that will be a main concern…. We [are not] there yet.”

Markman discussed how proxies and shareholder resolutions can bring information to the public light and curb egregious corporate practices.

“This is one of the things that the CIR is charged with doing,” he said.

As the formal portion of the panel, which lasted about an hour and a half, wrapped up, members of student group Wesleyan Coalition for Divestment and Transparency (WesCoDivest) held up handmade signs voicing their opposition to certain investment decisions the University has made.

WesCoDivest represent members of the University community who believe that the University’s investment activities are not transparent or ethical enough due to their refusal to divest from sources that contribute to the prison-industrial complex, fossil fuels, and those they believe have a stake in the occupation of Palestine. Investments in these entities are considered unethical due to the profits that are made from the exploitation of people and natural resources.

In response to the signs and evidence of student concern, Martin addressed the current unfeasibility of divesting from fossil fuels, as it would cause a sharp decrease in the endowment in the near future. The conversation continued informally between Martin and interested students.

“The demonstration was held at this event to draw attention to the discord between Wesleyan’s investment practices and the moral values Wesleyan claims to represent,” Klein wrote. “Although the conversation held throughout the event revealed many of the nuances in how Wesleyan approaches ethical investing, the push by those demonstrating is to do more than make these ethical decisions in closed door meetings. It is to turn the endowment into a political tool that reaches beyond the University to affect change. I think many of the students in the audience wanted to show Anne Martin that following ethical guidelines internally is not enough. Not only that, but students too are stakeholders in the University whose voices on these issues deserve to be heard.”

This article has been updated and corrected to more accurately explain the specific roles of the CIR, the Investment Office, and students’ perceptions of the investment practices of the University.