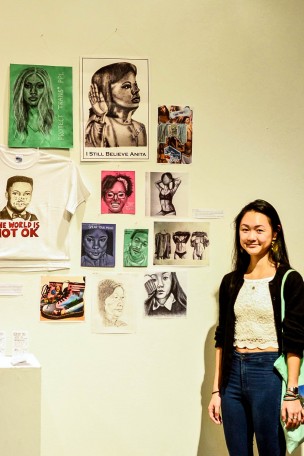 From now until Nov. 13, the walls of Zilkha South Gallery will be strewn with works from students featured in the University’s first Asian American Arts Festival, which took place last Friday. Titled “Orient, Disorient, Reorient,” after Barbara J. Reyes’ collection of identity-centric poetry, the festival consisted of the gallery opening event, followed by a performance art showcase, which took place later the same evening in Crowell Concert Hall.

Works featured in the visual arts exhibit were wide-ranging: From documentary photography, to drawings, to zines, each artist brought distinct personal touches to their work. Most artists drew upon individual experiences to comment on the concept of identity amid racial politics in contemporary America.

Oceann Gao ’19 incorporated an eclectic mix of her past projects to be presented at the festival. An Eric Garner-inspired t-shirt design, drawings, and a politically minded zine conveyed the grim events in the recent history of our country’s race relations.

In the zine titled “How to Be a (Better) White Ally,” Gao provides a comprehensive and digestible overview of institutionalized racism, along with advice for those interested in social justice and supporting people of color. Printed pocket-sized and accordion-style, the booklet goes to define “social justice as both elevating oppressed groups and simultaneously unpacking the privilege of dominant groups.” Much of the zine’s content highlights the importance of respect and thoughtfulness that can be forgotten when using certain words such as “sassy” and “exotic”—ones that have entered everyday vernacular in spite of their specific racial implications. Another topic of focus throughout the zine involves encouraging those with white privilege to use it as an instrument of empowerment for people of color.

The performance portion of the festival kicked off at 7 p.m. in Crowell Concert Hall. Though the size of the audience was modest at the start of the evening, the seats began to fill with students, parents, and faculty members as the presentations continued. University President Michael Roth was among those who made an appearance.

Just like the pieces displayed at the visual arts component of the festival, the performance pieces also covered a lot of ground in both subject matter and artistic medium. Spoken word was a popular genre throughout the evening, with most pieces centered on themes and ideas that are prominent throughout Asian American literature and experiences. Students voiced their feelings on being a part of an “invisible” culture, one whose history often knows no beginnings and whose stories are untraceable.

Drawing on personal experiences characterized by discrimination and otherness, students expressed their anger at the internalized exotification that often makes its way into the worldview of Asian Americans. Sarah Small ’18 performed a spoken word piece titled “Safe.” In it, she referred to her experiences growing up as mixed race, recounting the many instances in which she was made to feel hopelessly out of place.

“Asian enough to be exotic, white enough to be safe,” said Small as she recited her poem. The line was in reference to the way someone had once described her. As her piece developed, she listed the many instances where being mixed raced actually had the opposite effect. From receiving comments about being “too Asian” or “not Asian enough,” Small relayed the unrelenting worry of not belonging to any one group.

Grace Wong ’18, performed another spoken word piece that focused upon the need for an augmented ethnic studies program at the University. Honing in on Asian American studies in particular, she spoke passionately about the erased histories of Asians in America. In her piece, she likened the denial of ethnic studies to the denial of culture, a line that was met with affirmative “mmms” and snaps from the audience.

Instances such as these were characteristic of the many moments that seemed to unify the entirety of the space throughout the show. It was clear that the students in the audience, many of whom are of Asian American descent, were invigorated by the words that they heard from the stage–viewpoints and shared experiences that are not spoken of nearly enough in classrooms and everyday life.

“Watching my AAPI [Asian American/Pacific Islander] peers and friends speak truth to power made me feel alive again,” said Michele Ko ’16. “Their courageous and moving stories and performances about fetishization, domestic violence, exoticization, cultural erasure or generational trauma, etc., themes all too relevant in our communities and lived realities in and out of Wesleyan, empowered and inspired me to reflect on my own experiences and share my story.”

And though the spoken word pieces flooded the space with energy and palpable emotion, a variety of talents were showcased throughout the evening. Numerous students danced, played instruments, and exhibited other creations within the performing arts. For over two hours, acts followed one another on the Crowell stage, evoking powerful emotions and a sense of solidarity within the Wesleyan Asian American community.

The headlining act was LA-based Asian American hip-hop artist Jason Chu, whose work centers around the struggles and hopes of individuals close to him. In an industry where Asian Americans are not well represented, Chu takes hip-hop out of its conventional form. Straddling the line between hip-hop and spoken word, his work is demonstrative of his talent as an artist. However, Chu pursues a different route than most popular hip-hop artists, rapping about ordinary people and their experiences with grief, disorientation, and hope–themes that were central to the nature of the festival.

Closing out the show was student rock band “Dark Circles” a self-described project of the Fall Out Boy variety. Among the band members was Harim Jung ’16, who spearheaded the idea for the festival. After playing a number of head bobbing, danceable tunes, the band concluded their set with a cover of Japanese American artist Mitski’s indie ballad, “I Will,” which Jung dedicated to his mother.

Though the performance arts component of the festival ran for nearly half an hour over its scheduled time slot, the diversity of the works presented throughout the show provided a production that did not grow stale. The very first of its kind at Wesleyan, “Orient, Disorient, Reorient” provided a platform for Asian American students to share their experiences and engage them within a supportive and open community.

“The showcase all at once felt like a safe, loving place for an AAPI creative spirit,” said Ko. “It was a declaration of our existence and place on this campus, and a demand for action and change.”