Multimedia and multiform dance theses remind audiences of the art form's power and range of expression.

Lights flood the stage as seven clustered dancers are seen half-pivoting in complete and utter unison. They direct their gaze coolly to the audience, becoming a stoic fourteen-eyed beast. For a few moments, the performers are as quiet as the audience–the room’s energy derived only from the minimalist movement on stage. The rest of the theater remains entranced, and the mood for the entirety of the production has promptly been set. 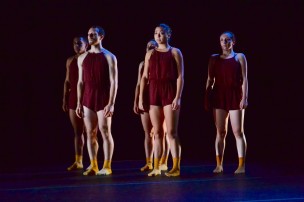 Set in the Patricelli ’92 Theater, the program featured five longer form dance pieces that were performed Thursday, Friday, and Saturday evening. The entirety of the show lasted about an hour.

Clara Pinsky’s “con•junc•tion” opened the show, a piece that adeptly commanded the attention of the audience, seizing the reserve of energy in the room before being able to manipulate it to an appropriate level of focused mellowness. This was in part attributed to the simplicity and repetition behind the piece’s movements, but also to the focus directed at the dancers’ facial expressions and performance techniques. Each dancer’s stoic gaze was simultaneously captivating and intriguing, a sure factor that moved the piece along developmentally.

As the rhythmic pivoting continued, elements of pattern in the choreography began to appear. Some of Pinsky’s dancers broke away from the cluster of synchronized movement and went on to travel expansively across the stage in a flurry of jumps and turns. The piece concluded with the dancers returning to the cluster as they had begun, and then slowly engaging in a routine gestural movement that involved one dancer gingerly laying another down on to the stage. The assisting dancer would then be helped down by another, a chain that perpetuated itself until the piece’s final moments.

The second number on the program, titled “their condition,” was a contemporary piece choreographed by Eury German. Donning salmon colored rompers, the five dancers masterfully employed elements of synchronization and rhythmic movement–a difficult feat when dancing in silence.  Despite the lack of musical guidance, the performers moved through the space with confidence and practiced intuition, effortlessly interacting with one another while bringing striking energy to the stage.

In one segment of the piece, the dancers branched off into individual movements, gliding past one another. During this moment it appeared that they all moved on their own time without regard for their fellow dancers. But with an audible exhale or cued stomp of the foot, they moved together again, as organized and conscious as before.

Sarah Greizer, in contrast, choreographed a rendition of Little Red Riding Hood, the popular folktale characterized by trickery and chase.  Greizer made sure to include all aspects of the story that makes it a classic: the wolf and other identifiable characters marked by their respective costumes.  More theatrical than the other pieces on the program, “The Path to Grandmother” employed props, gestural choreography, and elements of traditional acting.

The dance began with the grandmother character reclining in a cushioned chair. The Little Red Riding Hood character, clad in a crimson ice skater dress, leapt lightly on to the stage. All her movements were small and quick, evocative of the innocent air that defines her character. The opposite applies to the wolf’s character, who ran and skidded about with flat-footed jerking movements as she terrorized Little Red.

The piece was broken up into various segments that are reminiscent of acts in a play. Changes in lighting aid in carrying out these transitions as the stage lights dim during moments of dramatic suspense.

Perhaps most memorable was Ari Kaufman’s piece, a multidisciplinary performance centered around the concept of exhaustion. Titled “Utter neatness,” the performers ran in circles and jumped about loosely while wearing bright tie-dye shirts and flashy prints. This seemingly improvised segment continued on for minutes, as audience members reacted with equal parts perplexity, amusement, and curiosity. With movements characterized by flailing, flopping, and floundering, Kaufman elicited the internal indices that are associated with next-level exhaustion, all as Tchaikovsky blares in the background. And though the choreography was certainly a standout factor that was not to be expected, the zaniness of “Utter neatness” only continued from there.

As the frenzy of movement took place on stage, at least two performers camouflaged themselves with audience members, having one-sided conversations aloud.

After a few minutes of on stage movement, a few performers walked through the aisles of seats in the audience, conversing with audience members and obstructively stumbling over their legs. Simultaneously, two performers on the stage feigning breathlessness stood behind two microphones and spoke about their days, free association style.

With all that was happening in the seats and on stage, the piece certainly overwhelmed and evoked a sense of restlessness. It was a number that was unexpected as a senior thesis, but the creativity made it the most provocative performance.

The show concluded with “LDR,” choreographed by Djibril Sall and performed by four dancers. “LDR” is popular acronym for “long distance relationship,” and if it was Sall’s intent to allude to the woes that come with them, the memo was undoubtedly received.

The choreography in the piece started slow, picked up speed in the middle, and then reduced back to a perceivable air of melancholy. Lights turned on to the performers lounging awkwardly on two sets of couches. They made eye contact but showed no emotion: whatever feelings conveyed were done through the tensions of the movement and the general deadened energy on stage. In spite of this zombie-esque aura that each dancer embodied, it is the type of lethargy that precedes a shock. The tension in “LDR” was heightened to a critical point, when concealed emotions were ready to permeate layers of exerted suppression–perhaps relatable to some, but hopefully not most. Regardless, the piece provided a sense of closure for a show that encompassed a whirlwind of dance genres and creative endeavors—something that most “LDRs” unfortunately do not.