A few pleasant surprises—and a lot of food—in Paris. 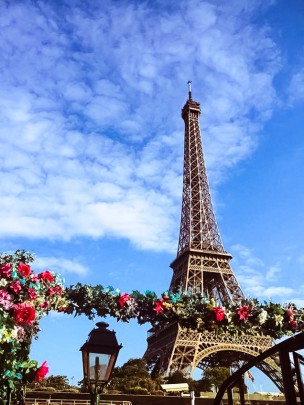 If you know me at the most superficial level, you probably know about my chronic case of Francophilia. So I surprised no one by the decision to spend a semester in Paris, a city in which I had dreamed of living since I was 14. Despite the pre-departure stress—I nearly failed to get a visa appointment at the French consulate in New York and also had no idea what my Parisian address was going to be until two days before I was dropped on my host family’s doorstep—I couldn’t be happier with the way my experience is turning out. However, my life in Paris isn’t exactly what I imagined it would be before my arrival.

I live in the city’s largely unknown 20th arrondissement in northeastern Paris, an area that I had never visited during previous trips. It’s known for its sizable population of immigrants looking to earn a living and live economically in an expensive city, which happens to work very much in my favor, given the fact I’m on a student budget. My friend and I even discovered an outrageously good French brasserie about two steps from my apartment where we pay only about 30 euros between the two of us for a two-course dinner and a carafe of wine.

The diversity in my neighborhood is impressive: When I walk to the Ménilmontant metro from my apartment, I pass an African pâtissier, an Arabic rotisserie, an Italian trattoria, and a Vietnamese restaurant all within five minutes of each other. Because of all these draws, the area has become very popular among young Parisians looking for cheap food and cheaper drinks. It definitely doesn’t look like the scenic Paris you see in photos, but it has authenticity that you’d have trouble finding at the city center. And almost no one speaks English, so I have plenty of opportunities to practice my French.

Even though I live relatively far away from my classes, which means I spend a lot of time underground in the Metro, my incredible host family makes the extra travel time worth it. I’m staying with a young mother and her adopted three-year-old son, and they have been nothing but warm and welcoming to me since my arrival. In fact, we all share one very important hobby: eating! My host mother would modestly deny it, but she is a star chef. We eat three dinners a week together, and I will never cease to be impressed by my host brother’s willingness to try new foods; some of his favorite cheeses are among the strongest and smelliest of the bunch. It must be an inherent part of growing up à la français.

Since I spend little to no time actually in class—and, frankly, even less time doing homework—I have tons of opportunities to get to know my neighborhood. I was quick to investigate a nearby bakery that allegedly has one of the best baguettes in the city. Needless to say, I was not disappointed; it had the perfect ratio of crunch to doughiness. At the same place, I discovered the magical “croissant au beurre,” which is like a regular croissant but with twice the added butter. So I understand why Parisians do a ton of walking; this kind of pastry is too delicious to pass up, and compensating with a bit of physical activity is pretty much obligatory after an indulgence like that!

Speaking of Parisians, I have, at long last, earned the satisfaction of being able to blend in amongst them. Having plenty of opportunities for people-watching, I’ve noticed that they a) never wear bright colors and b) always wear scarves. I thought it strange how early on in the season people began wearing heavy coats, though I guess when you have to go outside to smoke a cigarette every hour, you have to be prepared for changes in the weather.

When I realized a couple of weeks ago that I had reached the midway point of my semester in Paris, I couldn’t help feeling prematurely sad. Having been here for two months, Paris feels like home to me; when my friends and I returned from a beautiful weeklong vacation in Italy, we still found that we were anxious to get back to the French lifestyle to which we’ve become so accustomed.

I have quite a few more weekend trips planned before the end of my semester, but you can bet that I’ll spend as much time as possible taking in the spectacular cultural atmosphere that characterizes the most beautiful city in the world. I finally realize how true it is when people say that studying abroad changes you forever: I’m fluent in a language that had once intimidated me, I’m able to make and stick to my own travel plans, and, most importantly, I’ve learned how to live independently in a way that I’m not even able to at Wesleyan.

I’m extremely satisfied with all of my accomplishments thus far, but I’m nowhere near done with the linguistic, cultural, and personal growth that I hope the end of my semester holds for me. With several weeks still remaining, I intend to take advantage of this experience in every way imaginable: strolling down the boulevards, visiting parks and museums, and of course tasting (or stuffing my face with) those classic French delicacies.

So here we go! Or as the French say: C’est parti!