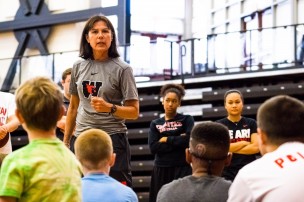 Women’s basketball Head Coach Kate Mullen set the tone for the event in her opening remarks.

“We owe a big thanks to Coach Mullen for being an instrumental part of setting it up,” said guard Harry Rafferty ’17, who helped coach the kids at the event. 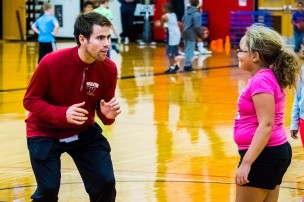 The clinic brought together several local religious congregations; Church of St. Mary and Grace and Mercy Family Ministries, both of Portland, and Shiloh Christian Church and First Church, both of Middletown, collaborated with Adath Israel to bring the event to fruition.

Along with these religious organizations, Froyo World provided the ballers with a nonfat, refreshing treat following two hours of hard work on the court.

Mayor Dan Drew arrived in sneakers ready to put his basketball skills to the test against Middletown’s finest, and at the conclusion of the event, each participant received a certificate of achievement signed by our city’s leader along with Coach Mullen, who effused enthusiasm throughout the event.

The event was the brainchild of Rabbi Seth Haaz of Adath Israel. Originally from the Philadelphia area, he’s been in Middletown for seven years, and he understands the importance of fostering a relationship between the community and the University.

“The synagogue has a relationship with Wesleyan, and I’m always trying to build that relationship up,” Haaz commented. “A couple years ago we had an interfaith Thanksgiving celebration and I had performance groups from Wesleyan come down, because to me they’re such an important part of Wesleyan. And I always want Wesleyan to be involved and to contribute to the community. Wesleyan students are very civic-minded, and so these types of events give them chance to engage with the community.”

Adam Finkelstein, a Middletown resident and ESPN college recruiting analyst and member of Rabbi Haaz’s congregation, spoke to the kids about the importance of sport and community.

Wesleyan’s own ballers demonstrated fundamentals and split off into small groups with the kids.

“It was a lot of fun,” said guard Lauren Gaj ’17. “There was a lot of energy, and it was a great way for the community to come together and for the kids to see what we do here, and to support each other, and it was a fun day for everyone involved.”

Kevin O’Brien ’19 echoed Gaj’s sentiments about the feeling of unity the event sparked.

Rabbi Haaz was thankful that the enthusiasm of other community groups mirrored his own, something that he highlighted in his comments to the players.

“I mentioned to the kids how awesome it is for people to say ‘yes,’” Haaz said. “As a member of the community and a leader in the community, I love people who say ‘yes’ to things. Coach Mullen immediately said,  ‘Yes, let’s do this,’ and Coach Reilly was also on board, and so were the other four organizations that came out. It makes me proud to be part of a community where there are so many yes-people.”

Many of the event’s attendees noted sports’ special ability to unite people.

“Adam Finkelstein was talking to the kids about how sports is a way for people to come together in ways that they otherwise wouldn’t,” Haaz continued. “You get a certain type of diversity when you bring people together for sports that you don’t get in other venues. So in that sense, sports events are a really unique opportunity to try and engage different groups of people who wouldn’t otherwise come together.”

The palpable mutual support in the gym on Sunday made clear that this relationship benefits all parties.

“Overall, it was a great time,” Rafferty said. “It was an awesome way for Wesleyan and the greater Middletown community to connect through the game of basketball, and I was proud to be a part of it.”