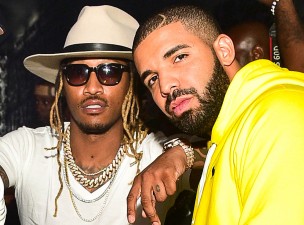 “The funny thing is, this shit shoulda never have happened,” snickered Nayvadius Wilburn (aka Future), Styrofoam cup in hand, looming over the mixing system in DJ Esco’s home studio (Esco is Future’s touring DJ and “A&R man,” as Esco puts it). It’s a comically honest comment from a rapper who, less than two years ago, probably wouldn’t have ever pictured himself sharing a recording booth with Drake ever again, much less working on a surprise collaborative album with him.

In 2013, a pre-debut album, pre-dumped-by-Ciara Future was scheduled to serve as the opening act on Drake’s Would You Like a Tour?, until the two artists had a falling out over comments Future made in Billboard magazine. Future criticized Drake’s newest release at the time, Nothing Was The Same, for being one-dimensional, and valuing cheap thrills over deeper cohesion, saying, “Drake made an album that is full of hits but it doesn’t grab you. They’re not possessive; they don’t make you feel the way I do. I want to make you want to fall in love.” Oh, what a difference two years can make.

Fast forward to 2015, and making you fall in love is probably the last thing on Future’s mind, unless your idea of love includes a ride through a nihilistic hellscape sponsored by Actavis and an impressive coterie of prescription pills. Instead, Future has become rap’s premier workingman, a restless auteur that doesn’t sleep or play the game of bullshit label politics but instead churns out music at a rate he describes best: “I hustle the first to the first.” The early months of 2015 brought a trio of album-quality mixtapes (Monster, Beast Mode, and 56 Nights), which culminated in one of the summer’s most inescapable releases: Future’s sophomore album, Dirty Sprite 2 (DS2).

Some attribute Future’s rise from the ashes to his rocky breakup with R&B singer Ciara, who has become a twisted sort of muse in Future’s work. As he puts it on DS2 track “Kno The Meaning,” “The best thing I ever did was fall out of love.” Others say it was the commercial and critical failure of his major label debut Honest, a sonic pileup that forced Future to confront an artistic style that simply wasn’t working anymore. Take it from Future himself, and it was DJ Esco who gave him the shot of reality he needed: “Esco came to me, he said they think you washed up.”

Whatever the reason for Future’s reemergence, it’s clear that Future’s mission statement has become dangerously close to the very strategy he criticized Drake for adopting. While Drake has expanded his business of making certified “bangers” with the last year’s release of album/mixtape If You’re Reading This It’s Too Late, so too has Future, although his songs now “grab you” in a very different way than he may have intended back in 2013. If Future “pours the Actavis and pop pills so I can fight the demons,” as he says on album opener “Digital Dash,” then he has also used music as a means to exercise these evil spirits as well.

If Drake is anything, he’s the consummate business, a master marketer who knows a golden opportunity when he sees one. Co-opting hits from the likes of Fetty Wap and Makkonen, or giving them a boost that has often been referred to as the “Drake Stimulus Package,” is as intrinsic a part of Drake the rapper as the Take Care-era love ballads he was once derided for. While Future has become a singular star in hip-hop far beyond where Fetty Wap or Makonnen once were, even he could use the occasional nudge. So, it makes sense then that the two were able to settle their differences, or maybe just see the musical and commercial potential that was possible with further collaboration. These were the circumstances surrounding the feverish six-day period in which Drake and Future’s game-changing, Twitter-shattering mixtape What A Time to be Alive were forged under.

Considering the massive fanfare surrounding the live release of the album on Drake’s OVO Sound radio show, What A Time to be Alive (WATBA) doesn’t exactly reinvent the wheel. The project starts off with the obligatory “Metro Boomin’ want some mo” tag that has become synonymous with Future’s music. The icy, foreboding beat on album opener “Digital Dash” is par for the course on a project produced almost exclusively by ATL-trap veterans Metro Boomin’ and Southside. The production on WATBA follows the blueprint that has become a staple of the music emanating from the 404: Grandiose, pixilated horns combined with booming 808’s and nihilistic sirens that make it sound as if judgment day is near. Even more subdued tracks such as “Scholarship” swell to maximalist climaxes, which dissipate amidst twinkling synths just as quickly as they appear. Perhaps Drake puts it most aptly on album highlight “Jumpman”: “Jumpman, Jumpman, Metro Boomin’ on production, wow.”

However, even as adroit an executive producer as Metro Boomin’ is, even he can’t bring the project to something closer resembling the cohesion of either artists’ studio albums. WATBA’s recording process, a six-day sprint, is a rejection of the careful marathon Drake usually embarks on. While this method was deliberate, and gives the album a free flowing feel, it comes at a cost. It’s clear that the real star of the project is Future, who isn’t forced to stray from his free associated comfort zone and is able to spit some of the sharpest rhymes of his career.

While Drake is able to succeed off sheer personality alone on WATBA, it isn’t enough to match Future’s whip-smart focus. The lyrical dichotomy between the two is best expressed on songs like “Live From The Gutter,” where Future delves into the details, “Cuban links on my wrist, I was on welfare/I see scales everywhere, I see hell everywhere,” while Drake takes cheap digs in an attempt to generate tension that isn’t particularly present (see “This for my dogs that go Karrueche with the chopsticks,” or the Nicki Minaj-jabbing fade in “Diamonds Dancing”).

While the project doesn’t adhere to any particular concept or attempt to grab onto meatier content, it also doesn’t feel like the phoned in cash-grab it could have been. Simply put, Drake and Future look like they are having one hell of a party, and it’s hard not to enjoy it with them. “Change Locations” possesses probably the most Drake hook ever (“Me and my friends we got money to spend”), but it’s hard not to sing along to Drake’s typical late night pleas to a nameless lover. Same with “Jumpman,” which succeeds where the somewhat misguided and awkward “Big Rings” fails. Drake and Future have clearly taken cues from the triumph of Silento’s “Whip It/Nae Nae,” by weaving in and out of up-tempo drums, and offering the repetition of “Jumpman, Jumpman, Jumpman,” as the opportunity to breakout into interpretative dance.

WATBA got its name from the writer Ernest Baker, who responded to a secret text from Drake about the project with a simple reply, “What a time to be alive.” Concerns with the here and now are particularly prevalent on WATBA. Coming off a recent feud with the rapper Meek Mill, and facing considerable expectations regarding his next studio album Views From The 6, Drake is ever cognizant of the fact that standing atop rap’s Mount Olympus is a precarious experience. On album-closer “30 for 30 Freestyle,” Drake addresses these concerns directly, tucked around some typical Drake rhymes about eating seared scallops and dipping off in white Porsches: “Not really sure what else you expected, but we didn’t flinch for a second, we got our shit together.” Is WATBA an attention-grabbing ploy to sustain cultural relevance until both Drake and Future’s next project? Does it merely play to our base desires of what we would expect a Drake/Future album to sound like? Does any of this really matter when the end result is so damn enjoyable? What A Time to be Alive, indeed.