Bulelani Jili '16, whom you probably know as Jilz, has a thing for Nietzsche. 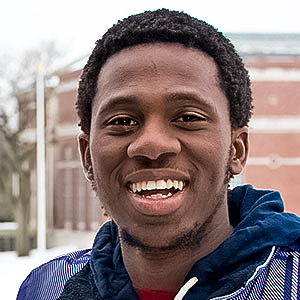 Bulelani Jili ’16, more commonly known as Jilz, started our conversation by singing T.I’s “Whatever You Like” and ended it by discussing the importance of trust in democracy. That’s just typical Jili: you may know him as that guy who’s hyped up about Marx, as the one who greets you brightly every time he sees you, or as one of the lead organizers of Middletown Potluck. No matter how you know him, though, chances are you’re happy to call him your friend. This week’s WesCeleb, Jili sat down with The Argus to talk about how he chills out in his spare time, his favorite YouTube personalities, and why his celebrity crush is Nietzsche.

The Argus: Why do you think you were chosen as a WesCeleb?

Bulelani Jili: I don’t know. I guess—[he breaks off mid-sentence to say, “Hello friend” to a passerby]—because I’m popular. Or people conceptualize me as popular. And I think I’m “popular” because I’m personable [and] actively engage with others fairly well. But also, you know, I think I’m the type of individual who’s very curious, and so I engage people in questions about themselves… insistently. And I think this campus is already a highly critical campus, so I fit in with the ethos of this place.

A: So what are some clubs you’re involved in on campus?

BJ: I’m the president of Middletown Potluck, which is an organization I started freshman year. I organize potlucks between Wesleyan students and Middletown residents. We get together and break bread, and then we formulize discussions on how to advance the community. From these discussions we’ve initiated projects. We’ve tried to build shelters throughout Middletown for the homeless community. We recently published a collection of short stories and poems. We’re just, you know, a space for discourse; we’re a space for active vulnerability. Beyond that, I’m a [Center for the Humanities] Fellow. I’m also, let’s see, I’m a senior interviewer. I’m also in CSS, and I have two certificates: one in International Relations, and one in Social/Cultural Theory.

A: You do so much! How do you keep track of everything?

BJ: Yes! I run around all day, without a doubt. Oh, I’m also a Fraser Freeman Scholar. It’s [the only Freeman] scholarship that’s given out to a person not from Asia, so I’m the 12th kid to receive this scholarship. So that’s how I ended up here. Terri Overton emailed the South African Consulate of Durbin, and a person from Education U.S.A. contacted me and told me about Wesleyan, and I was like, “Ehh, maybe I’ll look at it.” But at the time, I was only concerned about going to Yale. That’s just the reality of it.

A: What do you do in your free time, if you have any?

BJ: I have a fair amount of free time. I just, like, chill. My motto is “chill.” I usually like writing poems; I did WeSlam for some time. I really like poetry; it’s just a particular mode in which I can express myself.

A: Do you ever just want to be brain-dead and watch Netflix?

A: Who’s your favorite?

BJ: Like, I watch a program called “The Fung Bros.” I also really enjoy “The Food Show.” I’m really interested in cuisine and how differently kinds of people prepare food, but also what does the food mean to people.

A: Who is your celebrity crush?

A: It’s basically a person who’s famous for some reason or the other who you happen to have an interest in.

BJ: Well, to be honest, I pay attention to Nietzsche, a 19th-century German-Austrian philosopher.

A: [Laughing] I don’t think that’s what I meant.

BJ: What? It’s true! I’m really into Nietzsche. I really like Marx too.

BJ: At the moment, I’m trying to move to China. I’m really interested in a pursuing a master’s in public policy at Tsinghua University in Beijing. I’m interested in that because it seems the geopolitical landscape is shifting towards the East and for anyone that’s interested in international law, we want to involve the Chinese in some capacity. For anybody who is interested in international business or law, we want to be in conversation with China. Especially being from South Africa, most of our legal and political systems are engaged with China in some capacity. So, I figured the best thing for me to do is move to China.

A: What’s your thesis about?

BJ: It talks about what it means to be a citizen within a democracy. When thinking about citizenship, we usually think about what particular rights we qualify for or what benefits we receive from the state; but we don’t actively think about what responsibilities we have to each other as citizens.

I’m concerned with the very reasons why we have a lot of democratic issues and other forms of conflict. I zeroed it down to: democracy itself does have institutional problems, meaning we’re concerned with institutional means of racism or how patriarchy manifests itself in [institutions] that actively subordinate women and people of color. But I think the fundamental issue of democracy also has to do with the people that live within democracy.

I’m arguing that our greatest burden in democracy is trust. Not necessarily trust that citizens have toward the state or government, but rather trust among citizens. And I’m interested in how we can go about cultivating and generating trust. I argue for spaces of vulnerability where we can actively cultivate feelings of trust for each other and recognizing that democracy is not about you, or life isn’t really about you, but it’s about a collective understanding.