The Assistant Professor of Astronomy was recently awarded the Bok Prize for her accomplishments in research on protoplanetary disks and new planet formation. 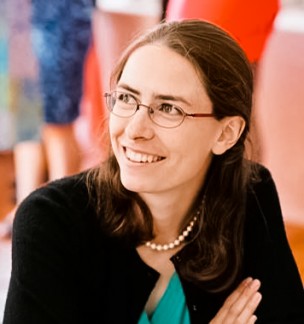 Assistant Professor of Astronomy Meredith Hughes was recently named the 2015 recipient of the Bok Prize in Astronomy for her accomplishments in research regarding protoplanetary disks and new planet formation. The award is presented annually by Harvard University’s Department of Astronomy to a recent Harvard Ph.D. holder who is under 35 years of age.

In 2010, Hughes received her Ph.D. in astronomy and now joins the ranks of pioneering researchers in the physical sciences, such as Nobel Prize winners Brian Schmidt and Adam Riess, who were Bok Prize winners in 2000 and 2001, respectively.

The award, named in honor of astronomer Bart Bok, is given based upon excellence demonstrated in a doctoral thesis, book, or research paper in the area of Milky Way research by observational methods. Each Bok Prize recipient is required to give a prize colloquium, which is recorded and broadcasted online. Additionally, the winner is given a plaque and personal stipend for hir achievements.

The process by which the winner is chosen takes place behind closed doors within Harvard’s astronomy department. There is no application process, so candidates are not aware that they are being evaluated. The recipient is notified via telephone, by way of a call that is often completely unanticipated.

“I was delighted, surprised, and honored to find out I’d won the Bok Prize,” Hughes wrote in an email to The Argus. “The phone call came out of the blue one day, and the department chair decided to tease me a little—he started off by saying that he was calling to ask me some questions about the talk I’d given earlier that week (I happened to have visited just a few days before.) That went on for a while, and I thought it was odd, but I just kept talking about my science…until finally he said, ‘Actually, the reason I’m calling is to tell you that the department has voted to award you the Bok Prize!’ I just about fell out of my chair.”

Though winning the award might have been met with incredulity by Hughes herself, the research she spearheaded speaks volumes on why she was selected as this year’s Bok Prize recipient.

Her project centers on planet formation, particularly addressing the ways in which planets form around nearby stars. Using radio telescopes to peer through the disks of gas and dust that gather around young stars, she and her research team further explored the conditions within which new planets form.

According to Department of Astronomy Chair Edward Moran, efforts of this research are especially relevant now in part because there is so much dialogue regarding the potential discovery of life on other planets.

“It’s compelling that there are planetary systems around other stars besides the sun, and knowing whether they can support life is one of the biggest mysteries we can possibly tackle in astrophysics,” Moran said.

What distinguishes Professor Hughes’ project from many others is the use of the Atacama Large Millimeter/submillimeter Array (ALMA), the most advanced radio telescope of our time. ALMA has only been operating out of Chile for a few years, making Hughes one of the first users of the instrument, one that has completely revolutionized the way in which scientists understand planet formation processes.

Last year, two of Hughes’ students followed the path she’d paved and wrote ALMA-related theses. One looked at an unusually old gas-rich disk to better understand the late stages of how giant planets like Jupiter and Saturn form, and the other adventitiously stumbled upon evidence of what might be a young protoplanet forming in a disk in the Orion Nebula, something that has never been discovered prior.

Cail Daley ’18 had the opportunity to work with Hughes and one of her thesis students over the course of last summer. Together, they examined one aspect of the ALMA data to gain further insight into what exactly takes place when new planets form.

“Deciding to work with Meredith last summer was one of the best decisions I’ve made in college,” Daley said. “She is very good at communicating ideas in a one-on-one setting. She’ll often write things out on a sheet of paper—equations, diagrams, etc.—to explain what she’s talking about, only to give you the pen and ask you to take the next step.”

What’s next for Hughes involves spending time with each new ALMA data set, in order to elaborate and deepen her team’s initial findings. But despite all the hard work underway, winning the Bok Prize also presented Hughes with an experience that resonated with her more personally.

Since being named the Bok Prize recipient, Hughes noted that one of the most enjoyable moments of the journey was having the chance to meet some of Bok’s family members, who have attended the colloquium each year.

“It was fascinating to ask his grandson about what his grandfather was like and to hear his memories,” Hughes said. “It really brought a historical astronomy icon to life for me.”