Last Friday, the Office of Sustainability hosted its first Freecycle sale, giving away lots of household and miscellaneous items for free. 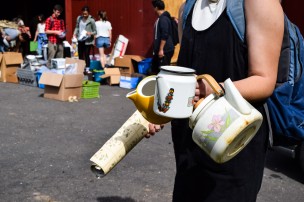 Boxes of household items, fridges, and microwaves were laid out in rows, with University students scrambling to get free items for their rooms. Last Friday, Sept. 25, the Office of Sustainability hosted its first Freecycle sale, giving away lots of household and miscellaneous items at no cost. Held after the annual Labor Day Waste Not tag sale, the event was an opportunity to give away some of the items left over from the sale.

Waste Not is a tag sale that is held at the beginning of every school year. All the items are donated from students when they move out after the end of spring semester. Student interns who were working for Physical Plant started the group in 2009.

“[Waste Not started because] basically when students move out, a lot of them don’t take stuff with them when they go, and everything was pretty much getting tossed in dumpsters,” said Sustainability Director Jennifer Kleindienst. “A lot of that was pretty good stuff someone could use. The idea was, why don’t we turn this into a sale?”

After everything for sale is donated by students after the spring semester, it is then collected by 30 volunteers, who organize and itemize all the items. Then, as many items as possible are sold on Labor Day weekend, which usually coincides with the University’s move-in weekend. The major aims of Waste Not include minimizing waste and encouraging students to donate those of their items capable of being reused.

Kleindienst also talked about how many students’ belongings end up getting thrown out at the end of the year and how the Waste Not sale provides an opportunity to divert a portion of that waste.

Since there was more donated at the end of the last academic school year, the Labor Day Waste Not sale was not able to sell all of the items,  thus warranting the need for Freecycle.

“We ended up with a lot of stuff left over from when we did the tag sale, and wanted to give the students and employees a chance to get what they might need,” Kleindienst said.

Everything that is not given away during Freecycle will be donated to Goodwill.

Jaime Ponce ’18 enjoyed the event. He thought that it was informative as well as useful, because it reiterated the importance of reusing items rather than discarding them.

“All that was at this Freecycle event was going to be garbage, and there were plenty of hidden treasures,” Ponce said. “It almost awakens us to be more conscious of what is truly garbage and what can be put to other uses.”

Jaquelin Aroujo ’19 came away with plastic containers, a microwave, and some cooking appliances. She felt that it was very beneficial to her and she was very happy about it, even though she had to make several trips back and forth between her dorm and the sale to carry the items that she got.

“I needed all of these things, and now I can cook and put away my clothes and not have them everywhere,” Aroujo said. “I’m really glad about it.”

Freecycle also gave students the opportunity to obtain things that they need, many of which are still of good quality, without having to spend too much money.

Justin Liew ’18 thought it was a great initiative and said that he appreciated all the volunteers and everyone who got involved.

“I personally hate wasting stuff, so it’s great that what’s not needed is not just thrown away, but given to Wesleyan students and [Goodwill],” Liew said.

He also appreciated the sale as it helps afford students the opportunity to get things they need without paying for them.

“I also think having a Freecycle after the sale is good as well, because there are some things that people will not pay for, but might still use,” Liew said. “So the freecycle definitely helps those who are poor, and gives items a second life that they might not otherwise have.”

Freecycle ended with significantly fewer items than they started with, and the rest of the items that were left were to be donated to Goodwill.

“My hope is that we can find new homes for all of the stuff, and make people happy and organized,” Kleindienst said.