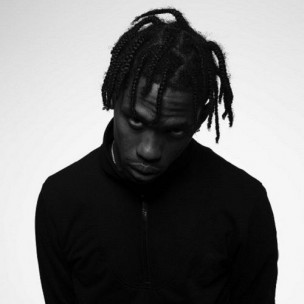 There’s one tweet that pretty much sums up Travi$ Scott for me: “travis scott is a biter.” It’s from Andrew Nosnitsky, a Pitchfork writer (let’s remember this is the same publication that consistently gives Chief Keef a 7.5 out of 10). The first time I heard Travi$ Scott on “Sin City,” arguably the worst track off Kanye’s Cruel Summer, I couldn’t have imagined the gaping hole his discography would become. Because, really, what can be said about Travi$ Scott that hasn’t been said about Kid Cudi? Or Young Thug? Or Future? Or Kanye West? Except, all of the aforementioned artists have one thing in common: they have genuine talent. Travi$ Scott does not.

Under normal circumstances, this wouldn’t be a problem because there are plenty of rappers who lack the production skills of Kanye, the unabashed passion of Kid Cudi, or the acrobatic linguistics of Young Thug. One of the issues with Travi$ Scott is that he has been proclaimed a rap savior of sorts—a master curator of aesthetic over substance whose talents are justified by his alleged mad genius and Kanye-esque creative vision. However, this criticism of Scott has been voiced a million times over on the internet and in any polarizing debate between those who hate and love Scott. The distinction between artist and curator is important, but less so than whether Scott’s final product is actually listenable. And, TL;DR, it is not.

For an artist whose utility is rooted in his distinct creative vision, it’s hard to discern what Travi$ Scott actually does. Let’s take his debut album, Rodeo, which dropped three weeks ago. Scott receives production credit on only one song, Apple Pie, which he shares with three other producers. It seems odd to credit Scott for a supposedly signature sound that he does not even have a tangible hand in creating. Furthermore, a quick listen to anything Scott has received production credit on explains why he leaves established beat-makers like Metro Boomin’ and Mike Dean to do the heavy lifting. Looking back on his breakthrough EP, Days Before Rodeo, the same pattern emerges. Scott only receives credit for two songs, and it’s clear from “Don’t Play” in particular that Scott’s production style is at best a sloppy imitation of the hazy environment created by Young Thug or Future; and at worst a cheap facsimile of producers such as Lex Luger or Metro Boomin’. As Deadspin writer Bill Haisley once wrote, “The result is what you’d get if a Drake Pandora station achieved sentience.”

So, fine, he’s not a talented, or even present, producer. But, once you’ve dismantled the myth of Travi$ Scott the auteur, his flaws become increasingly evident. For example, there’s pretty much no debate surrounding Scott’s rapping ability, precisely because he’s truly awful. Like, Pitbull-level awful. Like, make my ears bleed awful. Moaning in an off-pitch, poorly distorted voice, Scott spits half-baked lines like, “I’m off a bean/I’m off a bean/See this lean/It’s in my dreams,” on a regular basis.

Even Kid Cudi, never heralded as a lyricist in his own right, succeeded through the sheer depth and complexity of his emotional reservoir. Scott’s own well quickly runs dry. Dripping in clichés and one-dimensional odes to a lost love, Scott’s more reflective lyrics read like the discarded poetry of a 5th grader: “You the one, you know me the best/You the one I call when I’m stressed/This the time of the year I feel alone/This the time of the year you treat me wrong.” If I wrote those lyrics and showed my own mother she would probably call me wack, and a biter too.

Scott’s flows are jacked from whichever artist has last caught his fancy; whether it’s the nihilist rasp of Future on “3500,” or Big Sean’s double-time cadence on “Basement Freestyle,” Scott is an equal opportunity swagger jacker. What’s worse is the way Scott uses technology, and auto tune in particular, as a distraction from the weak quality of his music. Scott’s experimentation with voice distortion serves as a cheap ploy for his complete lack of likability and inability to facilitate any connection with his listeners. An original idea, concept or thought has never been expressed in any of his songs, even admittedly more tolerable bangers like the Days Before Rodeo single, “Mamacita.”

On tracks like “Mamacita” and “3500,” Scott thrives because he allows more talented artists like Young Thug and Future to create the tone and direction of the song. He may add a verse here, a bridge there, but ultimately, he steps back and coaches a collection of more talented players. So great, Scott is a slightly more talented DJ Khaled, minus the ad-libs. But he can’t, and doesn’t, produce. And he can’t rap. And his flows and vocal cadences are pedantic replicas of more talented artists’ styles. He’s a homophobic asshole to his fans on Twitter and in his live shows.

In response to claims that he’s a biter, Scott has offered a barely coherent response that essentially amounts to, “I’ve been nominated for Grammys, you’re a loser.” The rapper has dubbed himself the next iteration of Kanye West, and has shielded himself from wider criticism by leeching off more talented artists and exploiting the rap blogosphere hype-machine. Even Scott himself has admitted that his first mixtape, 2013’s Owl Pharoah, lacked a unique perspective. However, it’s clear from giving his debut album a spin that Scott’s Rodeo isn’t his own horserace, and, even if it was, it’s a remarkably banal one.