“After Charleston” Confronts Issues of Police Brutality and Systematic Oppression 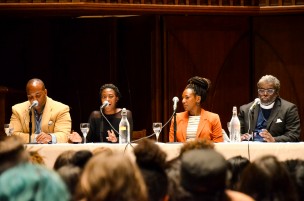 This article, a portion of which was published online on Friday, Sept. 18, has been updated to include a more detailed account of the question and answer session as well as additional quotes from the panelists’ speaking portions.

On Thursday, Sept. 17, students and faculty gathered for the first “Right Now!” panel of the year, “After Charleston: Next Steps for a Movement for Social Justice.” The event was co-sponsored by The Center For the Study of Public Life, the African American Studies program and the Office of Equity and Inclusion.

The “Right Now!” series holds events to address public issues. This particular event was held in response to the Charleston church shooting that occurred in June, the organization of social justice groups such as Black Lives Matter and the Moral Monday protests held in North Carolina. The event centered on the theme of a single question: Where do we go from here?

The four panelists were Student of Color Coalition intern Tedra James ’18; Visiting Assistant Professor of African American Studies Clemmie Harris; Bishop John L. Selders, Jr.; and Bree Newsome, an American activist and filmmaker from Charlotte, N.C., now renowned for climbing the flagpole at the South Carolina statehouse to remove the Confederate flag. The panelists spoke about their personal experiences before taking questions from the audience

“No issue is more pressing today than the struggle for social, political, and economic justice,” said director of the Allbritton Center for the Study for Public Life and John E. Andrus Professor of Sociology Rob Rosenthal, the event’s moderator. “Recent killings of people of color by police have focused attention on this struggle and reinvigorated the movement for social justice…. Tonight, four panelists will address that struggle and that movement.”

James began by addressing the panel’s central questions. She acknowledged the ties that students have, as a part of the University community, to oppressive institutions, and called for the University and its student groups to hold themselves accountable for these practices. Specifically, she addressed the impending renovation of the Malcolm X House and urged divestment from fossil fuels and companies perpetuating the Israeli occupation of Palestine.

Harris began his portion of the panel by expressing his solidarity with the Black Lives Matters movement.

“Let me begin by saying that I unequivocally support the Black Lives Matters movement,” Harris said. “I think that it’s important that all who found the very visible optics of police brutality enough to cross racial lines, to cross generational lines, to put issues of class and sexuality behind the corner to deal with the obvious assassination of black folks.”

He continued by addressing criticisms of the Black Lives Matters movement, pointing out the lack of historical understanding displayed by its detractors. Harris also mentioned that as a former New York State police officer, he has seen firsthand the ways in which law enforcement targets black and brown citizens, specifically during the War on Drugs. His work centered on investigating these injustices.

Harris concluded his speaking portion expressing his full support for an AFAM department at the University.

“Finally, in the time that I’ve been here, I’ve observed something quite interesting. And that is the type of orbit in which the African American studies program exists,” he says. “I encourage the movement to look back to look back to the movement in the 1960s…I encourage you to revive the spirit of that movement. I encourage you to put pressure, unrelenting pressure, on any administration that seeks to constrain the growth of these types of programs to push, to ensure that programs like African American Studies, Latin Studies, Afro-Caribbean studies receive endowments. Because if they don’t have endowments, they will not be protected.”

Selders continued on to speak about Montgomery, the Civil Rights Act and the Voting Rights Act. He praised the Black Lives Matters movement for spurring so much action in so little time.

“From Montgomery to the Civil Rights Act and the Voting Rights Act in ’64 and ’65, that was a 10-year period,” he said. “1o years…that we have some kind of consistent message in the Black Lives Matter movement, what took Martin Luther King and other leaders 10 years to do, look at what has happened in just a couple of years, in a few months.”

Lastly, Selders expressed the importance of turning thoughts into action.

“And lastly, I’ve got to tell you, none of this really matters if you don’t turn up,” he said. “And let me tell you what I mean by turn up. There comes a point at which you’ve got to get up ahead, you’ve got to get on the street, put your body on the line, and say ‘Black Lives Matter!’”

Newsome then spoke, beginning with an explanation of the power of students in initiating change. She also lauded James for her thoughtful plans for action and change.

“You’re young, you’re passionate, you have nothing to lose, everything to gain, and you have access to knowledge,” Newsome said. “Barring students from education, restricting access to education, has long been part of the oppressive power, that’s why we’re fighting for access for education today.”

She then explained the explicit and implicit actions she went through at the statehouse in Columbia, South Carolina.

“That system that values white property over black life continue today,” Newsome said. “That’s why we have to look objectively at what I did for a second. I climbed a pole, and I unhooked a piece of fabric from a metal pole. And I climbed back down, and I handed it to some gentlemen standing in uniform….James Tyson and I have already spent more time in jail than an officer who assaulted a black girl in McKinley, than the cop who killed Tamir Rice, I could go on and on and on. Why is that? That’s because the act that we did was not just taking a piece of cloth from a pole, we directly challenged the white power structure.”

She further spoke to the current issue of whether to raise the flag back up in South Carolina.

The event concluded with a question-and-answer session, where students and members of the community were able to ask the panelists about their views on a few specific and pressing issues, including economic power and discriminatory courtroom sentencing practices.

The first student to ask a question, a member of the class of 2019, addressed the inequity of sentencing in U.S. courts.

“What do you think we can do to modify the justice system so that such subjective changes in punishment don’t happen, where judges aren’t allowed to punish black offenders just on the basis of the color of their skin?” he asked.

Newsome responded by addressing the root causes of inequities in the criminal justice system.

“I think that the issue of the justice system, by the time you hit the courtroom, it’s already unequal, because we are unequally policed to begin with,” she said. “And the unequal policing arises from unequal laws that have been applied. So by the time we enter the courtroom, it’s already messed up…. A friend of mine posed a really practical question to me, he said that if you plant a tree to grow apples, what’s the process for then making that tree give you oranges. So you’re talking about a system that was really built on slavery, that was built on the devaluing of black life, and…you’re asking it to completely turn around do something completely different, which it has to do.”

The following question, also from a member of the class of 2019, asked how to hold prominent political figures accountable.

“How can we hold white liberal politicians more accountable for perpetuating these types of systems?” he asked.

Harris provided a critical take on the desires of politicians and insights on how to ensure they take action.

Harris also addressed the power that young people have in effecting change.

“And as a group of young people, you have the ability [to change] the consciousness of this country,” he said. “Look to the annals of history and see how young folks before you changed the moment in which they found themselves.”

One of the following questions asked how to do just that.

“How would you empower our generation to lift our voices?” a student asked.

“I think on the one hand you need to have people who know that their voice matters to speak up, so that people who aren’t that confident see that ‘Hey, that person’s speaking and being heard…therefore I can also speak and be heard’,” she said. “So I think it’s all about…playing off of each other and building each other up.”

The event concluded with Rosenthal’s assurance that this was neither the beginning nor the end of the discussion.