On Sept. 13, the WSA hosted its first meeting to discuss the events surrounding the closure of Psi U, the transparency of the administration, the current state of student-run spaces, and sexual assault. 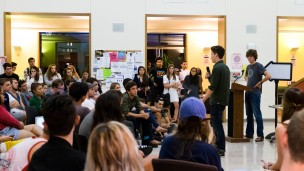 This is part of a series of briefs from The Argus to summarize issues discussed at the weekly General Assembly meetings of the Wesleyan Student Assembly.

On Sept. 13, the Wesleyan Student Assembly (WSA) hosted the first of a series of town hall meetings in Usdan to discuss the events surrounding the closure of Psi Upsilon (Psi U), the transparency from the administration about decisions of this magnitude, the current state of student-run spaces, and sexual assault at fraternities.

The meeting began with a stark reminder that these conversations can be difficult, and that survivors of sexual assault were in attendance. Survivors had the opportunity to speak up several times during the night, to discuss their views on the safety of fraternities on campus.

About a quarter to a third of the attendees during the start of the meeting were fraternity members. These students spoke up en masse. 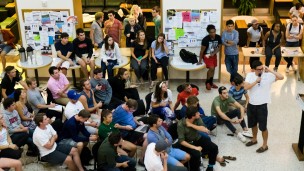 A Psi U brother opened the arguments by claiming that the person involved in the drug purchases had not paid their dues or rent in a long time and was not really in the fraternity. Brothers of Psi U further decried the lack of transparency from the administration, citing many of the same arguments that they made in their Wespeak article that was published immediately following their shut down.

New evidence was also brought to life, including an email from University President Michael Roth to Trustee Chairman Joshua Boger that was made part of public record from the Delta Kappa Epsilon (DKE) lawsuit. Psi U cited this email as evidence to claim that the real reason for their shutdown was an attempt by the administration to take the privately-owned fraternity houses.

“If we don’t close the houses with hopes of acquiring them, then we shouldn’t go down this route at all,” the email reads.

Psi U claimed this is the smoking gun that proves Roth is attempting to own their house, though others may believe that from the full context of the email exchange, it appears that he could instead be pushing back on a suggestion from Boger.  The full details of the email exchange are unknown, and any certain reading of Roth’s tone and intent is premature.

The room seemed to be in agreement that these major decisions that directly affect students are being made behind closed doors at the highest level with little to no input from students or the rest of the administration. Multiple people, both affiliated with Greek life and not, expressed frustration.

Once the Psi U shutdown issue had been discussed to satisfaction, the conversation then shifted to co-education at the fraternities.  Many members within the fraternities spoke up, both men and the newly admitted women, who stated that the co-education process was rewarding, enlightening, and largely a success.  Many of the female fraternity members stated that they felt at home and safe in Psi U, expressing dismay that they will not be able to live in their house. A few of the students who participated were seniors, and they spoke to the fact that this is their last chance to be part of the inaugural women’s contingency at Psi U.

The final topic discussed was related to student-run spaces. Several students expressed a strong desire to have control over their own space to host events, outside of the University’s purview.  A general consensus in the room was the fact that many students avoid University run events simply because the college is involved.  The shutdown of the fraternities has closed many of these student-run spaces, who are now searching for places that they can completely control.

At the conclusion of the meeting, several sexual assault survivors expressed their dismay with the conversation. These individuals stated that they felt that the fraternities were glossing over their sordid pasts and are not a safe place for women, despite a co-educated Psi U and women voicing evidence to the contrary. Many of the survivors felt intimidated by the strong fraternity showing, wished for a safer place to host these conversations in the future, and called on more students to call for safe spaces on campus for survivors.

The meeting ended with a review of the first meeting; a popular suggestion among the crowd was to host the meetings in a less public place. This was especially supported by the survivors, who stated that they had seen their assaulters walking by and were uncomfortable.

The next town hall meeting will be on September 27; the agenda is to be determined.

Roth will be giving a state of the student address on Wednesday at 8 p.m. in Memorial Chapel. Roth will speak for 30 minutes followed by a 45-minute question and answer session. Wesleying will be live-blogging the event, and there will be plenty of methods for students to submit questions.