For the past seven months, Amy Bloom has tackled the nation's most pressing ethical quandaries. 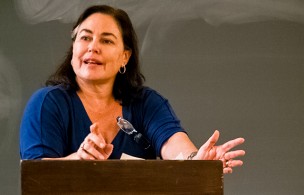 On the fourth episode of “The Ethicists,” an ethical advice podcast by The New York Times, Jack Shafer expressed his disappointment to the show’s two others hosts, Amy Bloom and Kenji Yoshino. They had finished discussing another letter and, yet again, no one was arguing.

“We have to stop agreeing like this, because they’re going to cancel this podcast,” Shafer said.

That was in March. Now, six months later, Shafer’s comments come off less as humorous than as light-hearted foreshadowing. According to an email sent to The Argus by Amy Bloom ’75, a co-host on the podcast and Director of the Shapiro Center for Creative Writing, “The Ethicists” will be ending its short run on Sunday, Sept. 20.

A New Concept, A New Format

“The Ethicists” began as an invention of Jake Silverstein ’98, the editor-in-chief of the New York Times Magazine. The former editor of Texas Monthly, Silverstein was brought in by The New York Times in March of last year to revamp its magazine, adapting it to fit the demands of an online audience.

During his first ten months, Silverstein tinkered with the magazine but left it, for the most part, as it was. Then, on February 18 of this year, he announced major changes to it on The New York Times’s website. The magazine would now feature several new or significantly altered columns, including “The Ethicists.”

Silverstein explained in his introductory “Editor’s Letter” that “The Ethicists” (a once single-authored column called “The Ethicist”) was going to be conceptualized as a podcast in which three co-hosts—Bloom, Shafer, and Kenji Yoshino—would discuss ethical questions.

But while the podcast became the focus of “The Ethicists,” the print column was not eliminated. Instead, since the podcast first aired, an edited transcript of the conversations have been printed in a condensed format in the New York Times Magazine as a single-page column.

The idea behind this new format was that the discussion—and, potentially, the debate—between hosts, rather than the advice, would become the point of interest.

“We’d always hear people talk about how one of the things they like to do is sit around and read [‘The Ethicist” column] with their spouse and kids and argue about the advice,” Silverstein was quoted in a Washington Post article as saying. “We wanted to actually create a format in which that itself was the thing.”

Bloom said that, as a result, listeners could hear the hosts’ positions change over the course of an episode.

“You might start out with one thing,” Bloom said. “Especially for me: there are several times where I start out in one place, and I end up some place else. And I think for both of the guys, as well.”

‘They Didn’t Necessarily Work Well Together’

Trouble started brewing for “The Ethicists” as soon as the podcast went on air. In May—just two months after it first aired—Shafer was let go from his role on the show and replaced with Kwame Anthony Appiah, Professor of Philosophy at New York University.

But this didn’t solve The New York Times’s problem of gaining traction for the show. Readers had been—and remained—disappointed with the print column, and few people were listening to the podcast. Part of the problem, Bloom suspects, was because the on-air conversation didn’t always translate well in print.

“I think that it was really hard to successfully go from the podcast to the print column,” she said. “They didn’t necessarily work well together. I think that when people read the print column, they want to read one voice and one opinion, and they don’t really want an edited transcript of a 45-minute conversation.”

The single-authored column was also a known entity, and a well-liked one at that. Replacing the authoritative prose of a columnist—even one who is not a professional ethicist—with the sometimes-uncertain conversation of three people didn’t always please the readers.

“One of the letters I remember getting really early on was: ‘I don’t know who these three clowns are, but why don’t we have a real ethicist like Randy Cohen?’” Bloom said. “Well, Randy Cohen was excellent. He was also a staff writer for David Letterman. I don’t know what would make him a professional ethicist.”

After Sept. 20, “The Ethicists” will once again become the singular “Ethicist,” according to Bloom, with Appiah writing a weekly column, designed for print consumption. The translational difficulties will become part of the past, and the magazine will perhaps once again find itself with an authoritative voice announcing the verdicts of ethical quandaries. It may also help that Appiah is an academic ethicist.

“[Appiah is] sort of, like, the real deal,” Bloom said. “Whereas, [Yoshino is] a constitutional lawyer, and I’m a novelist, and Anthony Appiah is a professor of moral philosophy.”

For now, though, Bloom remains at the helm of “The Ethicists,” ready to answer questions for at least another week.

And she has set her aims high for the final episode. She hopes to receive and discuss a letter from Kim Davis, the Kentucky clerk who was recently released from prison after having refused to issue marriage licenses to people following the Supreme Court Decision legalizing same-sex marriage.

“[Davis] seems not to understand actually the ethics of her position and her obligation,” Bloom said. “But she hasn’t written to us.”

Are you waiting for her letter? I asked her.

“We are,” Bloom answered. “I check the inbox every day.”

“The Ethicists” has only one episode remaining, so the clock is ticking. And Bloom is waiting, hitting “refresh” on her email, hoping to see the short-lived experiment go out with a bang.