For the first time in Middletown history, the mayor selected films for the Summer Film Series at the University's Center for Film Studies 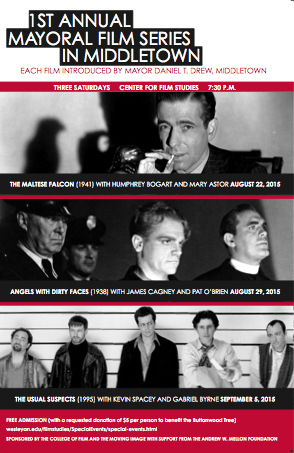 The University’s free summer film series has been running since the 1970s, and this summer it was as strong as ever. Founded as a means of uniting the Middletown community and combating the all-too-common summer slump, the free admission program has been engaging local children and their families through film for over 40 years.

In the past, themes featuring icons like Marilyn Monroe and Katherine Hepburn have been wildly well received, but in addition to this summer’s Jimmy Stewart picks, the season’s film series concluded with a bit of a plot twist.

For the first time in Middletown history, Mayor Daniel T. Drew chose the films that would close out the Summer Film Series at the University’s Center for Film Studies. As per usual, the series kicked off with four thematically-linked movies in July—in this case, Jimmy Stewart.

However, in late August, Mayor Drew selected an additional three films to be screened, launching Middletown’s first annual Mayoral Film Series. An avid film lover himself, Mayor Drew selected three age-old, classic gangster movies to be screened the last three Saturdays before students returned to campus. The films included “The Maltese Falcon” (1941) on Aug. 22, followed by “Angels with Dirty Faces” (1938) on Aug. 29. The third and final film shown was “The Usual Suspects” (1995), on Sept. 5.

As all audience members at previous summer film series have enjoyed free admission, the Mayoral Film screenings were no different. However, Mayor Drew opted for the event to serve as a fundraiser, so a donation jar collected funds that would benefit The Buttonwood Tree, a grassroots arts organization based in Middletown.

Few University students are on campus during summer months, so the Mayoral Film Series drew a crowd made up mostly of Middletown residents. Serving as an extension to the annual community film series, the three Mayoral screenings were organized by the same cohort of Film Studies faculty and staff who live in Middletown, in conjunction with Mayor Drew. Among these faculty members is longtime Corwin-Fuller Professor of Film Studies Jeanine Basinger.

Basinger helped found the summer film series decades ago and continues to oversee its organization each year.

“We’ve been running this since the 1970s and it’s really programming for the community,” Basinger said. “Many faculty members in the department of Film Studies live in Middletown. We pay taxes here, we vote here, and in the summer when school’s not in session, we run a free community film series.”

Mayor Drew was initially invited to introduce a film for one of the screenings, but was ultimately offered the opportunity to have his pick of movies to be shown at the end of the summer.

At the screening for “Usual Suspects,” the mayor expressed the importance of the University and the Film Series to the community, in addition to jokingly announcing Sept. 5 “Official Film Series Day” in town.

Film Studies major Emily Feher ’17 was one of the few students who attended the “Usual Suspects” screening. She joined a crowd of around a hundred Middletown locals, who filtered into the Film Department’s theatre for each of the three Mayoral Film Series screenings.

“I had never known who the mayor was, so in a sense it was a good way to unite Wesleyan with Middletown community, but it was a movie nonetheless, and not super interactive,” she said. “However, I think it may have served more as a means for Middletown residents to further connect with the school.”

Other individuals who were in town were unaware that the Mayoral Film Series even existed. Gillian Wilson ’17, who spent the summer working in Middletown, was surprised that the screenings received so little publicity.

“I think I may have seen a flyer or two on Main Street, but I’m not even sure about that,” Wilson said.

Basinger, however, said she was content by the end result of the first Mayoral Film Series. She explained that she enjoyed the relative simplicity that goes into gathering with her community to watch some good, old films.

“It did well,” Basinger said. “To do this in August when everyone’s just getting back, we do a nice crowd. We didn’t do a lot of publicity and the mayor enjoyed doing it. It was fun.”

As for next year, there is much still left to be determined. The Mayoral Film Series may not continue should the film aficionado mayor not win reelection. What is for certain is that the relationship between the University and the community in which it calls home will always find a bridge through film, whether they’re the mayor’s favorites or not.