The TV show alludes to hacker group Anonymous, following a computer geek who uses his talents for the greater good. 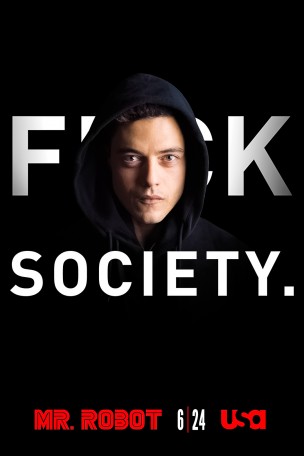 “Our democracy has been hacked” is the tagline of the show “Mr. Robot.” Airing on the USA network, usually reserved for lighter fare such as “Suits,” “Mr. Robot” examines the modern age from the perspective of a gifted coder by day and devious, even voyeuristic hacker by night. The show features a cast of unknowns, with the exception of Christian Slater.

When Mr. Robot’s (Slater) son asks him why he wasn’t punished for stealing from a client at a computer store in the ’90s, he pauses and says in an assuring tone, “Because you’re still a good kid, and that guy was a prick. Sometimes that matters more.” This belief is not only the ethos of the show, but also that of a generation of hackers who believe that stealing from those in power is not only acceptable. It is the ultimate social good that they can produce to liberate us all from the grasps of increasingly powerful governments and corporations. This, too, is the goal of the show’s hero, who wants to save the world from itself.

Elliot, the hero of the show, played by Rami Malek, is fantastically gifted at computers and getting inside the minds of those who use them by exploiting weaknesses, which he sees everywhere, especially in himself. Crucial to this character are a trauma-induced amnesia and a morphine addiction, at times highly functional, and at others debilitating. Elliot’s traumatic past and his difficulty recalling it are developed much later in Season 1. In voice-overs, Elliot describes his morphine addiction in terms that break substantially with most shows’ depiction of addiction. Addictions are often  described as “battles,” but this is not the case with Elliot’s. Morphine is a highly calculated part of his life—he even buys drugs to keep him from going through any form of withdrawal between pick-ups—yet it is not a choice. The most we get to see of Elliot’s psyche is during scenes of him doing morphine with voice-overs in Rami Malek’s anything-but-boring monotone.

The major players in the show are the conglomerate of E Corp (colloquially referred to as Evil Corp by the characters), a corporation whose logo looks remarkably similar to that of Bank of America, and fsociety, a hacker group that is an allusion to the hacker group Anonymous. Elliot works for the cyber security division of Evil Corp, the same company that killed his father by producing toxic waste. By night, he hacks people who do harm to others, from drug dealers to the most powerful people on the planet.

fsociety goes from being the subject of Elliot’s fascination to the source of his near demise. Like Anonymous, the spokesperson for fsociety alters his voice and wears a mask for all “public service announcements.” Authenticity-wise, the show is very thorough in mirroring what Anonymous does publicly while also giving fsociety its own autonomy. Another nice touch is the mask that fsociety uses, which looks more like the monopoly man’s face than the “V for Vendetta” masks that Anonymous uses.

Mr. Robot is a show that strikes a balance between having many complex narratives and motifs without getting stuck in the weeds with too many characters and side stories. The most important theme of Mr. Robot is that of justice, specifically retributive justice.

The CEO of Evil Corp makes an important point toward the end of the season when discussing the terrible things that Evil Corp does to make a profit, and it’s one that Wesleyan students will often hear in their activism. In what is essentially a slippery slope argument, he claims that the endless pursuit of justice when battling the most powerful organizations in the world is ultimately unfulfilling, and that if you can’t beat them, you might as well join them and change things from within.

There is much to be unpacked in “Mr. Robot,” both aesthetically and narratively. The key to enjoying this show is to allow yourself to be confused. A certain distance is required to participate in this show, whether it is a distance from the characters or a distance from the blatant allusions to contemporary society. This show will be a classic of the digital era, for it looks at our use of technology and its use of us in a way that no movie or TV show has yet to do. To watch “Mr. Robot” is to allow yourself to be hacked.