Staff Editorial: An Apology to the Student of Color Community 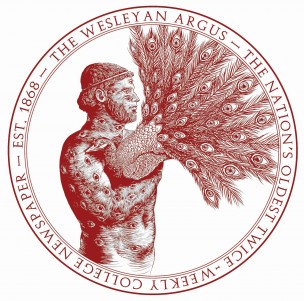 The front page of the Argus from Tuesday, May 5 featured a photograph taken at Monday’s Usdan Takeover, an event organized by the members of the student of color community to call attention to the racial injustices that persist on campus and around the world in light of the recent protests in Baltimore, Md.

The photo depicted Darian Sanders ’17 standing before a crowd of students and speaking about his personal experiences with racial prejudice. The caption read, “Darian Sanders ’17 takes the mic at the Can I Live?! Usdan Takeover that occupied Usdan University Center from 11 a.m.-1 p.m. on Monday, May 4. Students shared their experiences, poetry, and songs to express solidarity with Baltimore, Md. and other communities affected by police brutality.” This was the extent of The Argus’s coverage of the event. No article had been written to accompany the photo.

After The Argus was distributed, two of the Takeover’s organizers, Marjahn Finlayson ’15 and Arnelle Williams ’17, as well as participant LaNell Williams ’15, expressed at a meeting with Argus editors their dissatisfaction with the paper’s coverage of the event, and of events run by students of color in general.

“I was so excited to see that the Argus actually covered the event yesterday, only to see that we actually weren’t,” Finlayson wrote on Tuesday in a post in the Takeover’s Facebook event. “The Argus took a picture of Darian speaking at the event and took no measures to get any context for what took place yesterday.”

The Argus certainly did not intend to silence black voices or overlook the racism and hardships that members of the student body confront on a daily basis. Rather, our decision to include the photo in the newspaper without a complementary article was a pragmatic one. Production for Tuesday’s Argus occurs on Monday afternoons, meaning that we began finalizing the paper just after the Takeover had ended. We resolved that a standalone photograph on the front page would at least show to readers that the event happened, and that it was important to campus. Despite not having the resources to report and write an article for that day, we felt that not printing a photograph would be a greater injustice than printing just one.

That said, good intentions don’t cut it. A newspaper should speak for itself, and the issue that we put out on Tuesday said that we didn’t care enough. Ultimately, our actions were inexcusable and disrespectful to Wesleyan’s student of color community. Perhaps more importantly, they highlight a larger issue: The Argus’s insufficient coverage of events organized and led by students of color. Finlayson, Williams, and Williams pointed out to us that in the past year, specifically, The Argus has failed to publish articles on events such as those organized by the Caribbean Students Association and the annual Jubilee, which celebrates black culture in the African Diaspora. This neglect of students of color must be resolved immediately, and going forward, we plan to work as hard as is necessary to do so.

We’ve started by publishing an article (online, since The Argus is finished printing for the semester) on the Takeover. We recognize that this cannot compensate for our initial oversight, but we think it’s a good place to start.

As for the future, the Editors-in-Chief have made coverage of student of color events, groups, and life a top priority for next semester. We are committed to representing the entirety of the student body and recognize that if we have not done so, we have not done our job. It was pointed out to us that much of the content we do publish about student of color-run events depict moments of crisis and trauma, such as vigils, the Black Lives Matter March, and other protests. Going forward, we plan to also represent communities of color on celebratory, artistic, and day-to-day occasions, as it is our goal to represent all angles of student life on campus.

One major issue at the source of our lack of representation of students of color, and black students specifically, is the lack of diversity within The Argus as an organization. Our staff, and our editorial staff in particular, is predominantly white. As much as we try to overcome biases and reflect multiple perspectives in our journalism, we ultimately cannot separate our experiences from the content we produce. The Argus has always been a volunteer, unpaid group, but despite our biannual recruitments and open staff meetings, our demographics remain mostly unchanged. We seek to better diversify the Argus staff, beginning next semester, so that the paper includes a wider variety of perspectives that reflect the community as a whole.

We hope to make The Argus a place where all students see themselves represented in multifaceted and human ways. We want the newspaper to be a platform for the many voices that comprise the Wesleyan community, a student newspaper by and for all of Wesleyan students. We acknowledge our mistake, and we thank students for communicating to us their dissatisfaction with The Argus’ coverage of and relationship to students of color. It is our hope that by making The Argus more transparent in its operations, and more forthright in its shortcomings, we can be better held accountable and work with the community to find solutions. This has already begun. We plan to continue this conversation, and we strive to do better next semester and in the future.