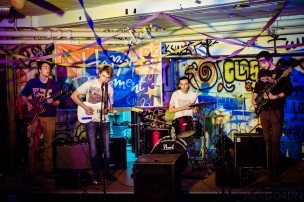 In last Friday’s roundup of the Wesleyan music scene, we highlighted several performers such as Rhys Langston (who opened for Heems at Eclectic) and Phatrabbit (who killed Battle of the Bands) who have given sensational performances this spring. Now, with less than three days before Jeremih takes the stage at Spring Fling (two words: Birthday. Sex.), we survey five more of of the finest musical acts Wesleyan has to offer.

Where you can hear them: https://allcapsladd.bandcamp.com

On their sound: “Two guitars, bass, and drums!”

The best Wesleyan show they’ve played: “It’s a tie between our Buddhist House fall 2012 (our first show as all-caps LADD and performed only for the members of Robert’s Don) and Battle of the Bands last spring.”

On their best song: “‘Jackfruit’ (YouTube this one, it’s from when our name was Cheenis and the Romp). Also, fun fact: it was recorded in a Jeep Cherokee driving in rural Wisconsin (Bon Iver-esque?).”

On what unique quality they bring to the Wesleyan music scene: “Probably our crippling social anxiety that renders us unable to have any sort of semi-competent stage presence.”

Where you can hear him: https://soundcloud.com/corneliusraps

On his sound: “Honestly I haven’t created a ‘sound’ that I think defines me yet. I’m in the lucky position of being young and open-minded so I get to experiment and learn what I like versus what suits me and find a balance between the two. For now, I’ll say alternative rap.”

The best Wesleyan show he’s played: “Opening for GoldLink was wavy. The energy was real high and stayed high despite multiple interruptions. The people here are also super supportive which makes it easy to find a comfortable lane as a performer.”

On what unique quality he brings to the Wesleyan music scene: “I think I’m accessible in a way that others choose not to be or are afraid to be. I talk about myself and my life experiences in very direct ways, even when it sounds like I’m not. I don’t know if that’s something I’ll continue to do or for how long, because there are consequences that sometimes can make it hard to justify to myself, but it works for me now. It’s therapeutic.”

Genre: A funky and jazzy R&B and hip-hop fusion

Where you can hear them: https://soundcloud.com/cheftheband

On their sound: “Our sound is made up of a collective of individuals with open musical minds who are passionate about what they listen to and what they create. The age we live in, as well as the range of people who go to Wesleyan, facilitate musical mobility to an astonishing degree, and our band is a reflection of that. Genre has never been in our favor, but if you want something to chew on, try neo-soul/funk/hip-hop/jazz/rock.”

Their biggest influences: “We definitely look up to some great Wesleyan ‘big bands’ of the past like The Rooks and Sky Bars. Another great source for influence is [the talent] of each and every member of the band. When we’re thinking about what type of arrangement to write or how we imagine a song ending up, we think of how all of us would enjoy playing it.”

The best Wesleyan show they’ve played: “Our best Wesleyan show was either opening for The Rooks at Alpha Delt or our X House show in February. However, from a performance standpoint, we keep improving and our shows get more exciting as we gain loyal fans and get tighter as a band.”

On their best song: “Most people in the band would name ‘Wandering’ or ‘Fog’ as our best song. Probably ‘Fog’ because it’s as complex as ‘Wandering’ but you can listen to it in many more states of mind. We have a lot of fun playing ‘Fog’ because it goes so many places, but it’s also the one the crowd recognizes and has perhaps the catchiest melodies of any Chef song.”

On what unique quality they bring to the Wesleyan music scene: “A distinguishing factor is for sure our size. Also, Wesleyan has a lot of rappers and a lot of bands, but combining the two is a somewhat unique thing. Whatever our genre is, it is pretty distinguishing as well.”

Where you can hear them: https://soundcloud.com/overcoatsmusic

The best Wesleyan show they’ve played: “Our first show, Battle of the Bands!!”

On their best song: “The next one we’re releasing, ‘Freedom.’ It’s an empowering song and you can dance to it!!”

On what unique quality they bring to the Wesleyan music scene: “We are the only band that survives solely on cheese puffs.”

On their sound: “Indie rock/alternative pop.”

The best Wesleyan show they’ve played: “The best show we’ve played was probably at 200 Church two weeks ago, even though it got shut down toward the end. It was our first headlining gig and there was a great crowd. There were also a lot of pixie sticks.”

On their best song: “Our best song is ‘I Fall Around’ because it’s fun and catchy and has a lot of dance-ability.”

On what unique quality they bring to the Wesleyan music scene: “What distinguishes us in the music scene is that our sound falls somewhere in the middle of the pop and alternative [genres], which allows us to appeal to a wider audience. We also have a new singer, Mira, who helps distinguish us because we are a rock band that has harmonies.”